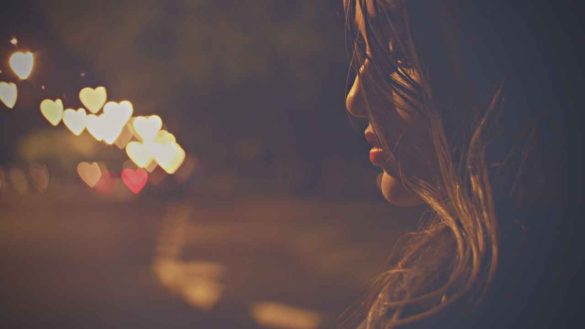 Finding a soulmate is genuinely one of the most beautiful things in the world.

Your soulmate knows you better than anyone else, and they mirror your soul.

This is why there’s an instant connection with a soulmate you just can’t ignore from the minute you meet them.

However, a soulmate connection isn’t always perfect, as there are instances where your soulmate doesn’t want you.

Unreciprocated love is difficult enough, but a soulmate rejection feels even worse.

In this article, we’ll be discussing the things you should do when your soulmate doesn’t want you.

The thing is, people won’t always reciprocate your feelings and unfortunately, this goes even for your soulmate.

So you didn’t just meet your soulmate to be together or fall in love, but you could also have met to learn a specific lesson.

Also, not everyone is on the same path as you, and that’s one of the most common reasons for a soulmate rejection.

So when your soulmate doesn’t want you, it’s not always something you should take personally.

Remember that a soulmate connection is one of the most powerful things you’re ever going to feel, so it will be overwhelming for the both of you.

In order to understand the nature of a soulmate rejection, you can’t take it personally.

It’s highly possible that your soulmate rejected you because of how great and powerful a soulmate connection is.

Although it’s not as powerful as a twin flame connection, it’s still stronger than your average relationship.

So your soulmate may push you away because of this and be in denial of what you have.

Maybe they sabotage anything good and worthwhile they have in their life, or they want you to believe that what you have isn’t real, even if it is.

If your soulmate is this way, they’re not on the same level of personal growth you are.

Lastly, a soulmate rejection could also occur when they’re already in an existing relationship.

Even if what you have is nothing in comparison with their relationship, there’s nothing you can do but let them come to the realization on their own.

What To Do When Your Soulmate Doesn’t Want You

The primary thing on what you should do when your soulmate doesn’t want you is to accept they don’t want you.

They don’t feel the same, so stop trying to change their minds.

The best thing you can do is to accept the situation for what it is.

Your soulmate clearly isn’t ready to be with you and can’t commit.

The earlier you accept this harsh truth, the better.

We know how difficult it is to accept a soulmate rejection, but these things are all part of life.

Your soulmate just isn’t on the same level of personal growth as you or is busy denying the connection you evidently have.

You need to accept that this is the case. Even if you are soulmates, it takes two for a relationship to work.

2. Let your soulmate be

When someone doesn’t feel the same way or doesn’t want to commit to us, our tendency is to try and change their minds or control the situation further.

However, you need to give your soulmate space and let them be.

It’s not your responsibility to change your soulmate’s mind or make them choose you.

If they want to keep denying your connection or keep sabotaging what you have, let them.

It’s easier said than done, but it’s necessary that you let them be.

You can only help them grow, but you can’t force them to do so when they’re just not ready.

A soulmate connection is so powerful that it really is possible for one to be in denial and to run away from that connection.

After all, it is a divine relationship.

So when dealing with a soulmate rejection, you need to let them be, even if every fiber of your being tells you to chase them.

3. Stop trying to chase them

It’s always a difficult feeling when your soulmate rejects you, but you need to stop trying to chase them.

Again, it’s not your responsibility to do so, and it’ll only make things harder for the both of you.

Chasing them will only make it harder for you, so it’s essential that you let them.

Even if you want them to choose you and commit to you, there’s nothing much you can do if they aren’t ready.

Your soulmate is on an entirely different path than you or doesn’t feel the same way.

It’s time you accept the facts rather than force someone who isn’t ready.

As beautiful and extraordinary as being with your soulmate feels, not everyone will be ready to handle this.

This is a significant one when it comes to the things to do when your soulmate doesn’t want you.

As much as you want both of you to be on the same path, you have no control over your soulmate.

Don’t feel guilty that their growth is different than yours as that isn’t something you can control.

Just like you should never lower your standards for anyone, the same goes for your vibration.

If your soulmate rejected you and you’re willing to go through the healing and growth that this rejection gave you, this is just proof you’re on different levels of development.

In the same wavelength, a soulmate rejection doesn’t mean you have to stop feeling anything for them – that’s not how it works.

You can still feel strong emotions for your soulmate even if they rejected you and aren’t ready to be with you.

5. Be your own soulmate

If you want to heal from the soulmate rejection, the best thing you can do is to be your own soulmate.

Stop trying to force something that’s not meant to be, and focus on your personal development.

As cliche as this sounds, this is the best opportunity to focus on self-love.

Give your soulmate the time and space to grow and learn the significant lessons while also focusing on loving yourself more.

Be empowered with the belief that you shouldn’t reduce your frequency for someone who just isn’t ready to be with you.

A soulmate connection truly is one of the most powerful and extraordinary things you’ll experience in this world.

This is why a soulmate rejection can feel so bad, but you must not take it too personally.

If they don’t want you, be your own soulmate instead.

6. Focus on your personal growth

You know what they say – the best way to deal with rejection or a broken heart is to improve yourself.

This saying goes even for a soulmate rejection.

So if you’re wondering what to do when your soulmate doesn’t want you, it’s being empowered on your personal development.

Take the time to heal and recover from this rejection, and realize that this is not a reflection of your inadequacy or lack of self-worth.

Instead, it’s the other way around.

They’re lacking something that they’re unable to commit to you or aren’t ready to face the powerful emotions that come with a soulmate connection.

After all, it is one of the most powerful relationships you can have in this world.

Aside from all the things mentioned above, it’s highly possible that they might not even be your soulmate.

They’re not your soulmate if something is lacking or no matter how hard you try, it’s always as if you vibrate on different levels.

Soulmates aren’t always similar, but your souls should mirror one another. Frankly, it’s easy to confuse the lines between a soulmate and an ordinary love.

After all, we all desperately want our current lover to also be our soulmate.

However, you should feel in your gut they’re your soulmate by how they mirror your soul, understand you better than anyone, and help you grow.

So if your soulmate doesn’t want you, don’t eliminate the possibility that maybe they’re just not your soulmate – and you have to accept that.

This can be seen as a good thing.

It just means that your soulmate is still out there, and the Universe has yet to cross your paths with one another.

It means that this rejection is just a typical rejection instead of a soulmate rejection.

So even as a soulmate rejection can be caused because they’re not ready to commit or they’re on a different level of growth, it could also be because you’re mistaken about them being your soulmate.

They’re just someone who understands you, but your souls don’t vibrate at a similar frequency.

Thank you, I hope you enjoyed reading this article on what to do when your soulmate doesn’t want you. Feel free to check out some of the related posts below. 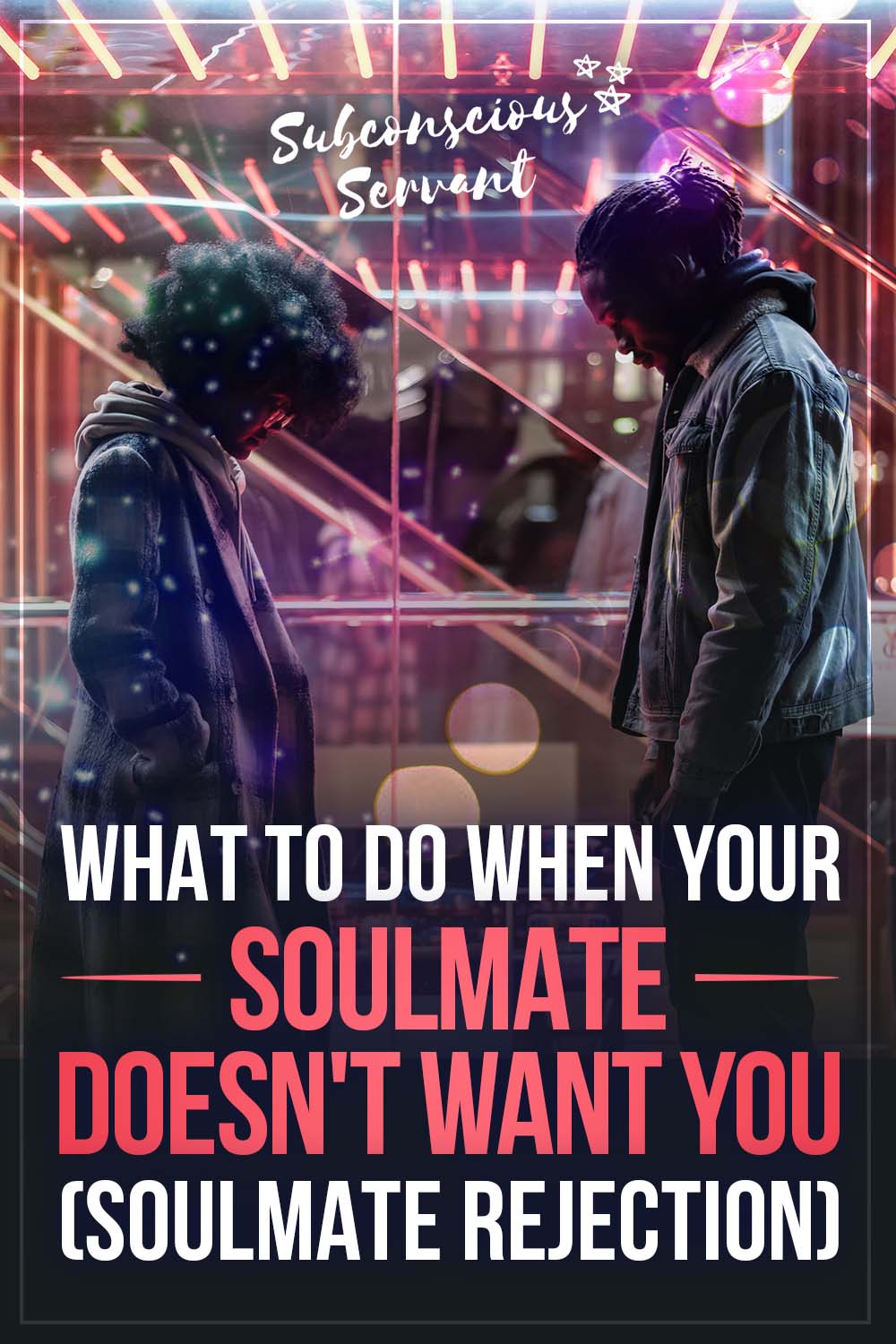 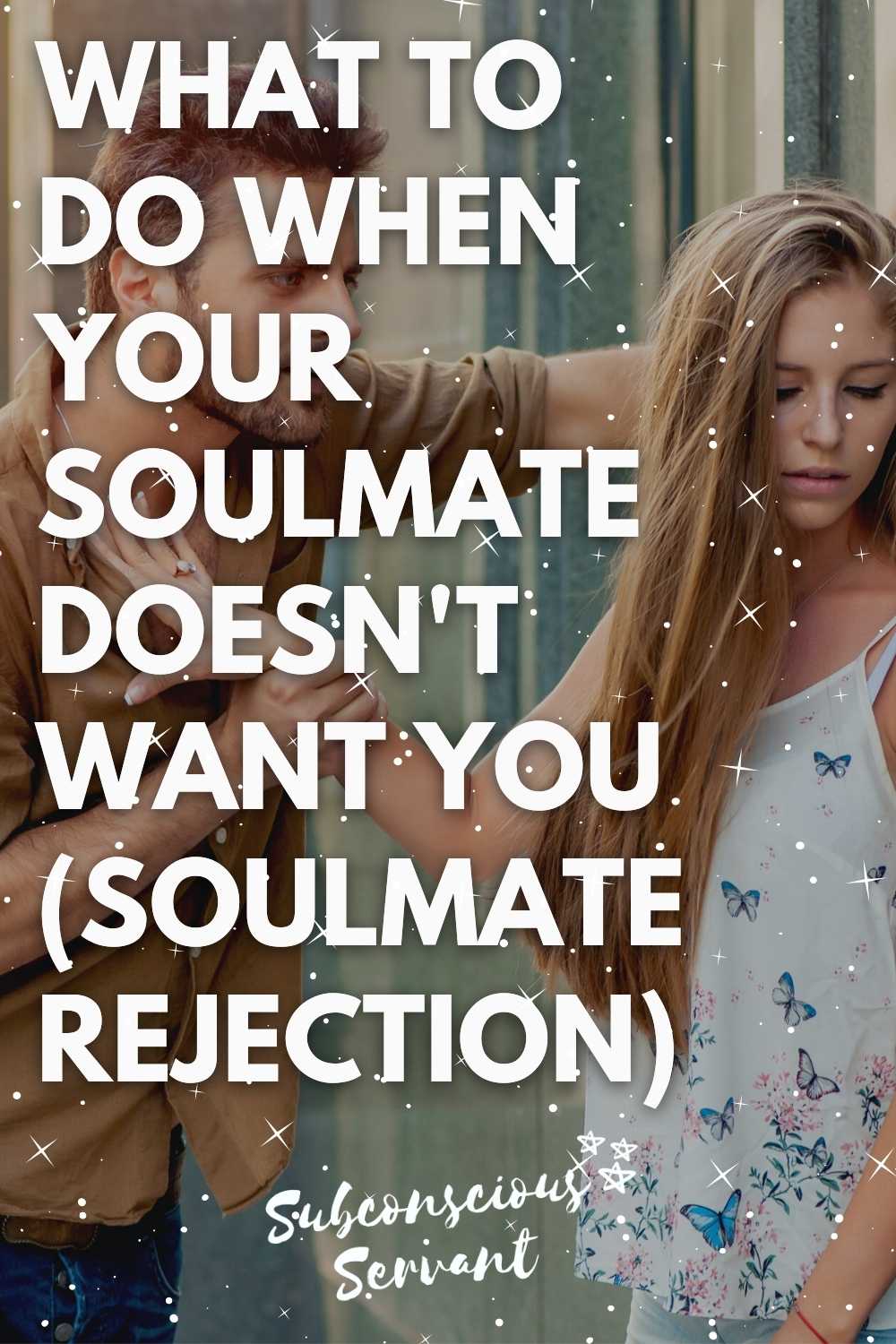 9 Wonderful Signs Your Soulmate Is Thinking Of...

How To Get Over Your Soulmate (Even When...

How To Manifest Your Soulmate: 11 Must-Know Secrets

11 Wonderful Signs Your Soulmate Is Coming