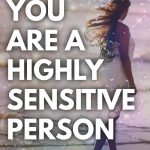 We all have our sensitive sides. Maybe yours comes out during movies like Marley and Me, or maybe you get sensitive when working with homeless children.

But for some, being sensitive to things is just second nature; these are what we call sensitive people.

There’s nothing wrong with being sensitive; more than not, they’re some of the kindest people we’ll ever meet.

They care about everything and can sometimes even burn out from being so emotionally invested in the world around them.

Does this sound like you? It’s possible you are one, too.

The 11 signs that you are a highly sensitive person.

Are you someone who detests any kind of harm or violence? When someone is getting hit or abused in any way, do you do whatever you can to stop the violence?

Highly sensitive people tend to avoid conflict at any cost and do whatever they can to de-escalate an aggressive situation they may be in the path of.

They’re kind, loving, and only touch others in a loving way. They are, in other words, the Gentle Giants of the world.

You Need Your Own Time A Lot

Highly sensitive people aren’t necessarily introverts, but they definitely need their time alone. Being very emotionally invested in the world around them can often lead to them feeling a little burnt out and run-to-the-ground.

As a highly sensitive person, you may find yourself frequently turning down the lights, wrapping yourself in a blanket, and just relaxing.

One popular trait of highly sensitive people is their tendency to take things personally.

When someone points out a flaw, or makes a general comment about them, they will immediately take it to heart and let it soak.

This can sometimes lead to them hurting their own feelings, and it’s important to separate general comments from aimed insults.

You Need to Know All the Details

As a highly sensitive person, you’re always looking at the details of a situation and seeing how they might affect you.

Some may find it picky and annoying, but your attention to detail is one thing that makes you unique and an asset to any team.

There may be times where it does, in fact, get a little annoying for those around you, but it will all be worth it in the end.

It’s important to realize, however, that there is a time and place for criticism; if you don’t need to point out someone’s flaws, then don’t.

You’re Somewhat of a Philosopher

Highly sensitive people seem to constantly be in deep thought.

They’re the kinds of people that zone out more often than not and think about some of life’s deeper questions.

They aren’t going through an existential crisis, but they are often pondering questions like: why do we exist? Why do people act the way they do? How do I have an impact on the world around me?

These sorts of questions, while common among highly sensitive people, can do more harm than good.

Due to the deep nature of the questions, the answers can be quite negative and highly sensitive people will often hurt their own feelings as a result of overthinking.

This is almost unavoidable, so it’s important to have a method of grounding yourself and bringing a more positive vibe back into your life.

This goes hand-in-hand with the fact that highly sensitive people like to avoid conflict and de-escalate when they can.

You’re often told that you can light up a room from the moment you walk in, or make anyone’s day better just by being there.

Highly sensitive people have this natural tendency to attract others to them and spread their kindness. They are, quite literally, a beacon of kindness in a world that seems all too negative.

You Get Really Annoyed by the Little Things

One thing that seems to be common among all highly sensitive people is their tendency to get very annoyed by even the littlest of things.

You will often get borderline angry when little things like someone tapping a pen against their desk, or the smacking sound of someone chewing gum with their mouth open.

Telling them to stop is going to be almost unavoidable, so make sure you do it as nicely as possible.

Highly sensitive people don’t like change; they often see it as challenging and an unnecessary stressor in their life.

Little things like moving desks or larger things like buying a new car because your old one broke down will make you over emotional and cause you to go through a minor internal crisis.

Don’t worry though, it’s only temporary and you will be fine.

❤️ Recommended For You: 21 Simple Pleasures To Make You Stop And Appreciate Life

You’re Prone to the Waterworks

The amount of tissues you can go through is almost award-worthy.

Highly sensitive people have a low “cry threshold” and seem cue the waterworks at even the littlest of emotional moments.

But don’t fret, there’s nothing wrong with crying every now and then (or every day). Just make sure to buy tissues that moisturize your nose; nothing will ruin your day like dry skin 🙂

Have you ever noticed that you constantly want to hug others around you?

Maybe you assume that they’re going through a hard time, or you notice that their facial expressions are a little “sadder” than usual.

Whatever the reason may be, highly sensitive people have a natural and almost biological need to hug everyone and anyone.

You’d Do Anything For the Ones You Love

Whether it be that friend that you made in that one class in high school two years ago, or your own sibling, you have a tendency to care about them deeply and do whatever you have to for them.

This can be as little as sending them class notes, all the way to helping them financially or through a hard time.

While this is a great quality to have, it can oftentimes lead highly sensitive people to a point of burn out. It’s important to take care of yourself first and know when you’re hitting your limit.

Nothing is worse than seeing someone needing help because they’ve been helping others too much.

So, now that you have this list of signs of a highly sensitive person, think about it: do you fit the bill?

While it seems like a hard life to live, the reality is quite the contrary. Highly sensitive people are some of the kindest and warmest people the world will ever see, so if you are one, don’t worry.

Keep trucking along and make sure to keep the tissues nearby… you never know when you’re going to need them!

[…] “As highly sensitive individuals, we simply cannot stand feeling trapped, constricted, or smothered in any way. We highly value our […]