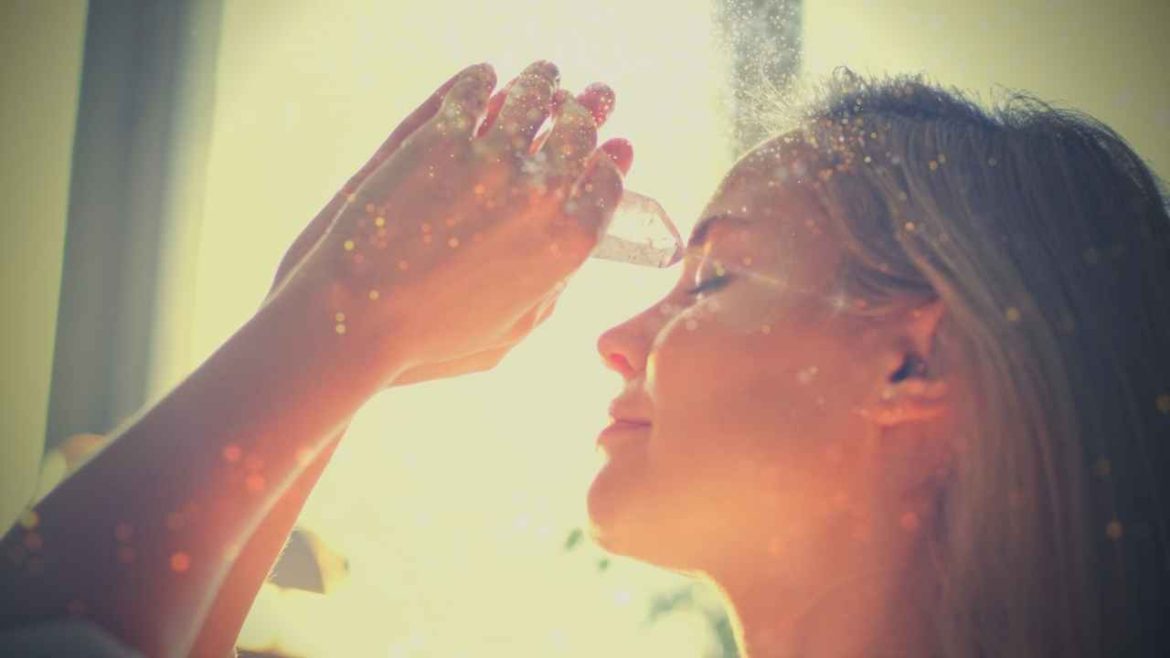 A lot of people go most of their lives without opening or balancing their chakras, and when they finally do, the crown chakra is usually the last to open.

Opening and balancing chakras are important because it keeps us properly in-tune with the rest of the universe and all the creatures and plants in it.

Just because you’ve activated your crown chakra doesn’t mean it stays open all the time, either. Whether you are suffering from a blocked crown chakra or you are on the verge of activation, there are some common symptoms most people feel when their crown chakra is blocked.

Once you are aware of your chakras and the symptoms that pop up when they are blocked, you can begin to open them. Below are not only symptoms of a blocked crown chakra but tips for opening it and maintaining balance as well.

The 3 Main Symptoms Your Crown Chakra Is Blocked

There is nothing more annoying than a chakra that’s been activated, but that suffers from a blockage.

It can cause all sorts of problems in the physical world as well as the spiritual world. In fact, there are three main categories of symptoms most people feel of when their crown chakra is blocked.

That said, everyone is different.

Most people might go their entire lives without experiencing any symptoms. Others, on the other hand, might be extremely sensitive to changes in the body and notice symptoms as soon as an imbalance occurs.

Regardless, below is a closer look of the physical, mental, and spiritual symptoms that arise when the crown chakra is blocked:

Most people don’t realize it, but their negative outlook on life is caused in part by a crown chakra that is blocked or out of balance.

The thing about mental symptoms, though, is they can be hard to pin-point. However, if you are having uncontrollable negative thoughts, that is a good indication your crown chakra is blocked.

Some other common mental symptoms include:

Perhaps the biggest giveaway that someone’s crown chakra is blocked is if they have feelings of skepticism towards a higher power.

This skepticism ranges from slight to intense, depending on the type of blockage. Maybe the person feels a sense of abandonment from the spiritual world on a subconscious level, and he or she adopts that same mentality toward humanity as well.

This feeling can then lead to a multitude of others, including controlling and destructive behavior, and greed.

The hardest part about unblocking the crown chakra is convincing someone of this nature that their behavior and mentality are indeed a result of a blocked chakra.

Mainly because someone in this position most likely won’t believe in a “crown chakra” anyways.

That is why spirituality is a solitary journey.

You cannot be told a lesson.

You must experience it for yourself.

When you are suffering from mental health issues, it can be hard to find the motivation to help yourself.

However, if you start to focus on opening and balancing your crown chakra, you will undoubtedly see the mental symptoms dissipate. It is a long and oftentimes confusing journey, but unblocking your crown chakra will literally open your life up to a new world and a new way of life.

When it comes to experiencing physical symptoms, the main thing that you see across the board is how the person reacts to these symptoms.

It isn’t necessarily about what the symptom is or what part of the body hurts.

Rather, you are listening for the kind of vocabulary the person uses when talking about the ailment. If the person or yourself talk about your physical ailments as if the world is punishing you through your condition, you could very well be suffering from a blocked crown chakra.

That said, there are definitely still some physical symptoms to look out for, namely, if the person in question experiences these symptoms in combination with the mentality mentioned above.

Some physical symptoms of a blocked crown chakra are:

In a sense, you are actively trying to keep your body in sync with the cosmic energy that surrounds it. When the body is out of sync for decades as a time, it can lead to even more detrimental physical ailments.

Some of these ailments include:

Unfortunately, physical ailments such as these usually only happen after a lifetime of avoiding the divine.

In this type of situation, the outcome is nearly impossible to reverse with a simple opening and balancing of the crown chakra. Granted, doing so may help in the treatment process. It will not, however, be a quick or easy feat.

Most of the physical symptoms and ailments revolve around the head because of where the crown chakra is located.

That doesn’t mean you will only experience symptoms in these areas, though.

Everyone is different, and everyone requires their own personal regimen for healing from these ailments. In some cases, adopting a routine yoga practice can help initiate the process of healing your physical ailments, while simultaneously opening your crown chakra.

An overall depression of energy flow results from a blocked crown chakra.

Have you ever been in a room with your back to the door, but felt someone walk in just from their energy?

Have you ever known someone that just seems naturally charismatic?

These are all people that have an open and balanced crown chakra.

That’s because when the crown chakra, also known as the spiritual beacon, has a strong and uninterrupted current of energy flowing to and from it, that energy radiates around any room and reflects off people and objects around them.

The direct opposite can be said for someone with a blocked crown chakra.

Much like the way positive energy feels light and fun, negative energy weighs people and objects down and creates a darker atmosphere.

Some spiritual symptoms of a blocked crown chakra are:

It can be hard to recognize the spiritual symptoms of a blocked crown chakra because, in most cases, the person isn’t even aware of their intuition or the spiritual side of reality.

Most of the time, these spiritual symptoms will instead manifest as mental or physical symptoms instead.

Even then, the only time someone can recognize these symptoms in themselves is if they are already on a path of self-discovery and begin to open their other chakras. Only then is the person receptive enough to recognize they feel this way as a result of a blocked crown chakra.

Recognizing the symptoms is only half the battle.

Opening and balancing any chakra in the body takes a tremendous amount of self-discipline and a passion for self-discovery.

Most of those who practice regularly balancing their chakras suffer from a blocked crown chakra. They realize that is the problem because nearly everything in their life seems to be going wrong.

If you have ever said, “why does this always happen to me?” then you most likely have a blocked crown chakra.

The easiest way to get rid of these negative symptoms is to open and balance the chakra in question.

Granted, you will likely experience symptoms from opening your chakras as well, but in most cases, the symptoms are milder than those experienced from a blocked chakra.

In other words, symptoms of opening a chakra are positive symptoms, while symptoms experienced because of a blocked chakra are inherently negative.

To learn more about how to open your crown chakra, continue reading below.

Causes of a Blocked Crown Chakra

It is believed that as newborns, the chakras in babies can either be open or blocked, depending on whether or not the mother consciously works to balance them throughout pregnancy and infancy.

Once the baby is born, the parents can try massaging each chakra point to keep the energy flowing properly.

However, if you were born in a household that doesn’t teach about chakras, then you probably had blocked chakras for most of your life.

Some people go their whole lives without activating them.

That said, chakras are just energy points within the body. They are there whether the person believes they are or not. It is possible for the person to indirectly activate and balance their chakras by means of another comprehension.

It doesn’t matter how the person activates their chakras, just that they do.

Sometimes, a chakra becomes blocked after it’s already been activated. There are numerous different things that could cause this:

Essentially, anything that seems to have low vibrational energy is most likely the cause of a blockage.

This couldn’t be truer for the crown chakra because it is the one so closely in-tune with the divine energy of the universe.

This isn’t as serious as it initially sounds, though.

Just because the chakra is blocked doesn’t mean it’ll be hard to open again. In fact, the more often you first experience blockages, the easier it gets to figure out how to maintain balance later on.

Not only that, but some blockages are small than others.

Once you’ve done the work to uproot childhood trauma, the blockages are likely to get a little easier. That is until you begin uprooting ancestral trauma.

Ancestral trauma has roots that run strong and deep. This type of trauma causes blockages within the crown chakra that can seemingly be permanent.

It is important to remember that with enough time and conscious effort, the ever-changing flow of energy will one day release the blockage once and for all.

All other types of blockages seem minuscule from that moment onward.

How to Open and Unblock Your Crown Chakra

Humans are unique creatures, and so are our chakras.

It’s only right that our journeys to opening and unblocking them are unique as well.

Sure, there are some common examples of different ways to aid in the process of unblocking a chakra, but at the end of the day, it is mostly intuition-based.

Whatever feels right to you is exactly what you should do.

The crown chakra is the most vulnerable chakra for many because it is our direct line to Source energy. It might take a constant evaluation, but once you learn how to maintain a balanced flow of energy within your crown chakra, seeing your life’s purpose becomes clearer and clearer.

Some common ways to unblock your crown chakra include:

The crown chakra is arguably the most powerful chakra in the body.

It is the one that allows you to see your dreams into reality just as it’s the one to hold you back from realizing your true potential. There are two ways to live this life: the easy way and the hard way.

When you actively work to unblock and open your crown chakra, you are choosing the easy way. You begin to see your manifestations come into fruition and everything else in your life falls into alignment.

If your crown chakra seems to be blocked with little or no end in sight, be sure to check your symptoms with this article and begin work to heal and unblock the chakra.

At the very least, it will help you maintain an overall balance of abundance and synchronicity within your life.

❤️ Check out these other articles that you may also enjoy: 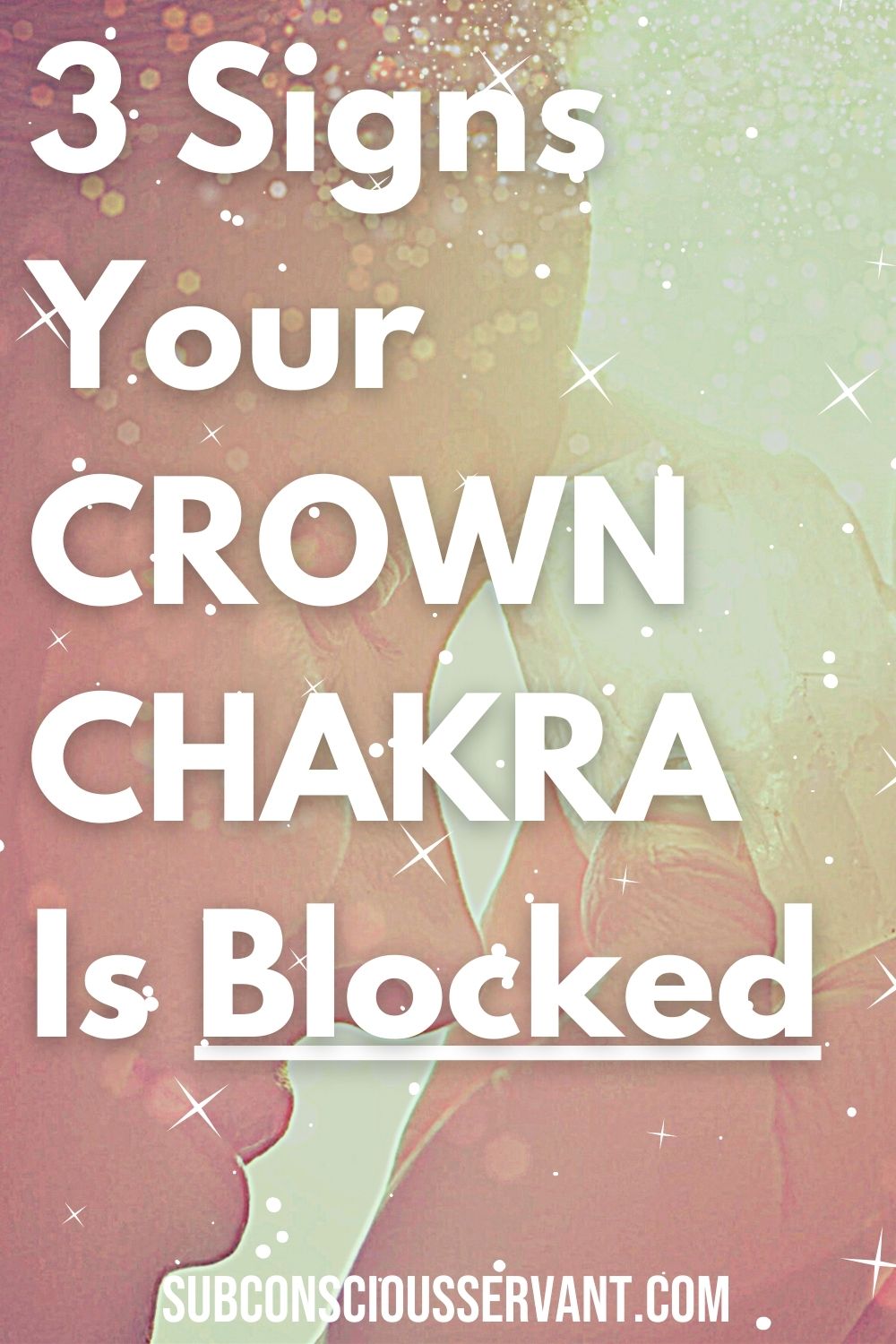 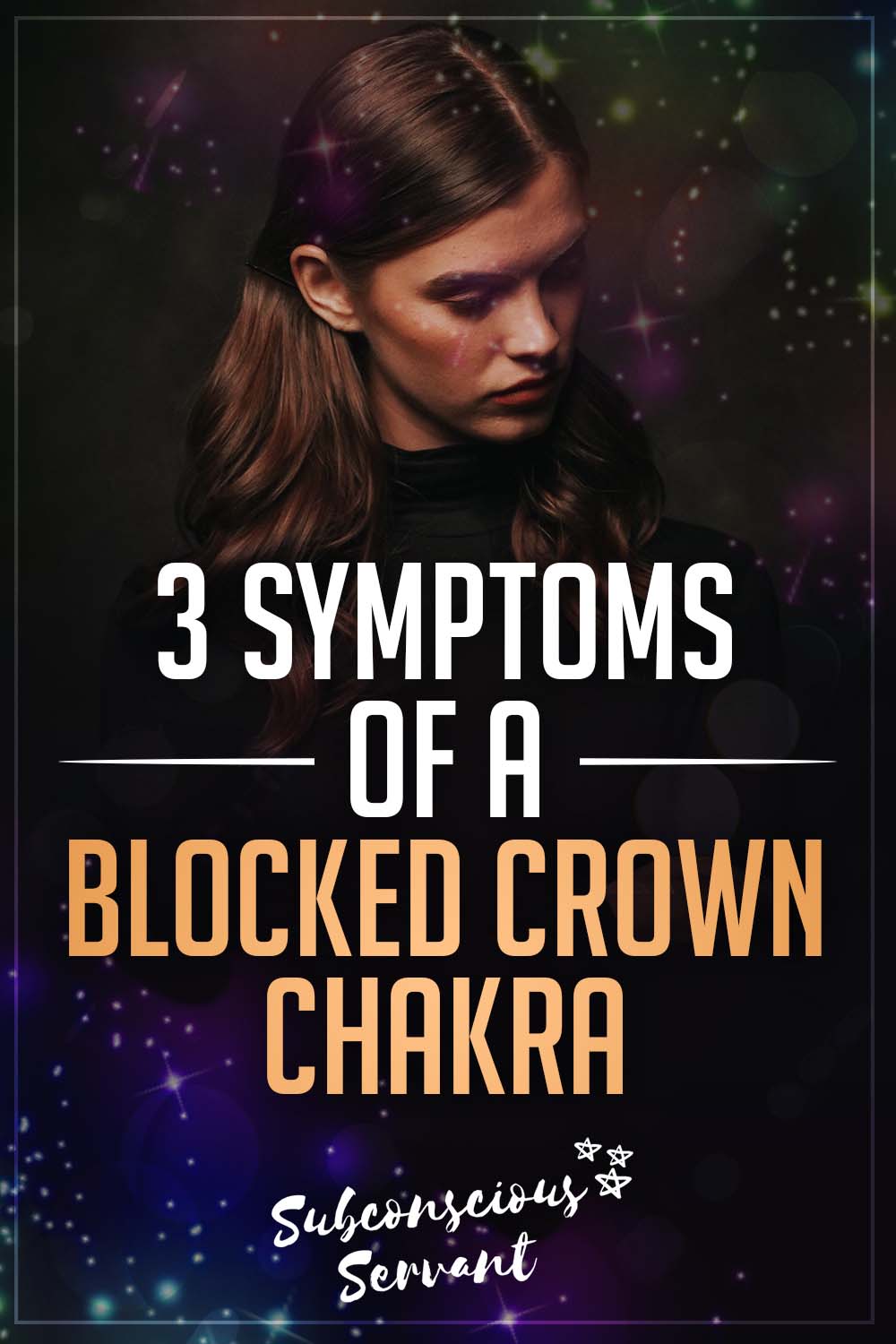 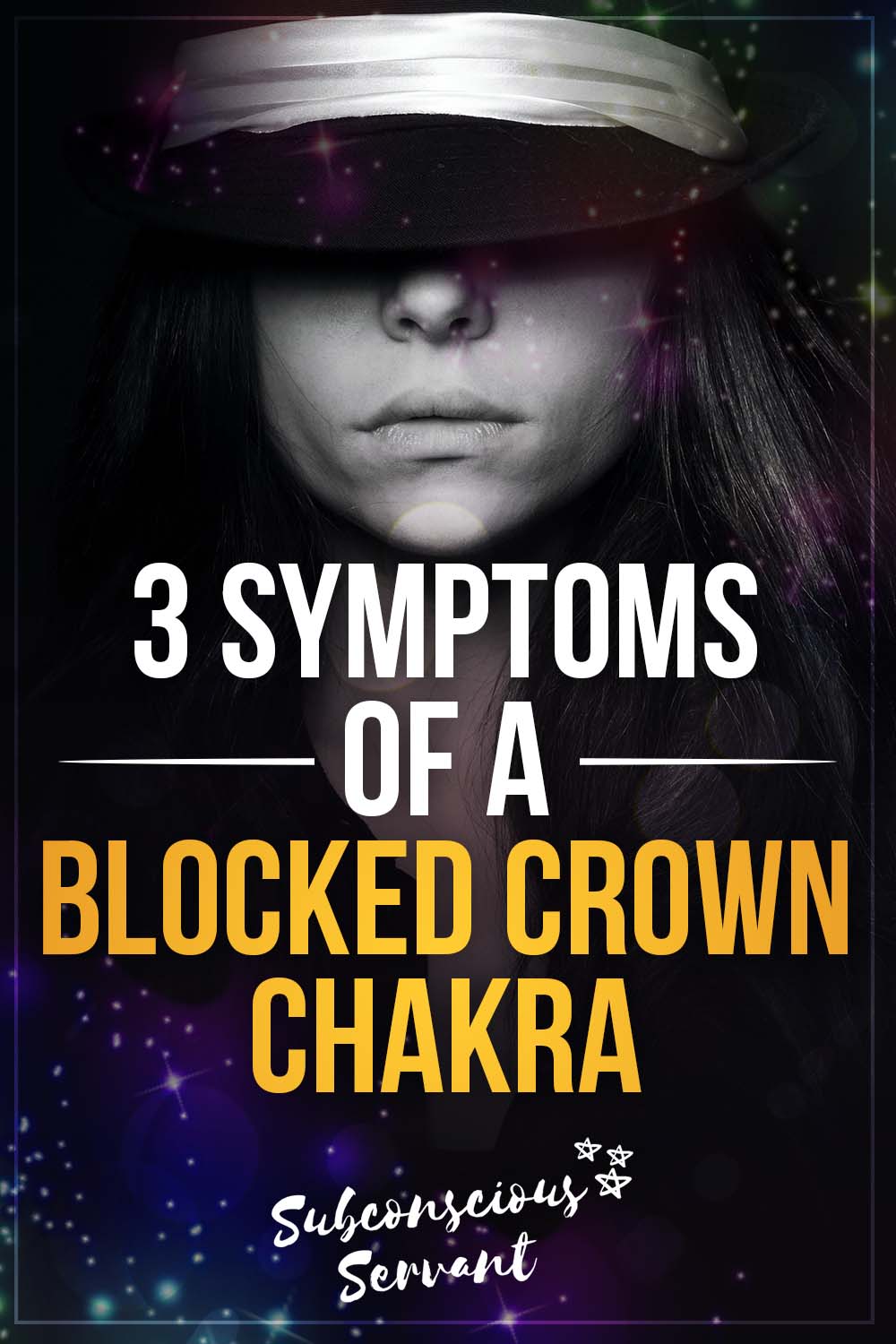 7 Signs You Have an Overactive Heart Chakra

Started reading Eastern Body, Western Mind so thank you for this!

Wow this was so helpful I took lots of notes thankful for you!!