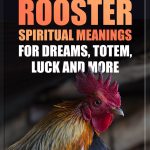 Spiritual meanings are often an indicator of something in your life, and this isn’t limited to animals like roosters.

One of the roosters spiritual meanings is courage and pride.

In fact, when we’re talking about a Biblical context, a rooster is the symbol of Christ.

Even as you might see roosters everywhere in your path, you might be unaware that they already hold a deeper spiritual meaning.

It might not just be coincidental, but there’s a divine meaning when you repeatedly see a rooster.

In this article, we’ll be discussing what the rooster spiritual meanings are.

As mentioned above, courage is one of the rooster spiritual meanings that are commonly known.

If you keep seeing a rooster within your path, it could be the reminder you need to stay courageous, no matter what situation or challenge you’re currently facing.

The rooster spirit animal reminds you to embrace yourself, including your opinions, ideas, and the voice you have within yourself.

See the world without fear and be brave enough to show who you really are to others – that’s what the rooster spirit animal is trying to tell you.

Don’t hide in your shadows and hide all the significant aspects of yourself.

Be brave enough to show your voice and speak what matters.

The rooster spiritual meaning is also trying to tell you to be more positive and optimistic in your life.

Repeatedly seeing this animal is reminding you to share your positivity with others and radiate it to everyone who comes across you.

This also means not being too serious all the time as life is already challenging enough.

The rooster reminds you that negativity will never get you anywhere, but positivity will take you places.

People who resonate with the rooster spirit guide are often optimistic in a way that they never let their past mistakes and decisions define them.

Instead, they use it for their growth and betterment.

Speaking of not being defined by the past, another spiritual meaning behind the rooster is resilience or the capacity to endure trials and sufferings.

If you keep crossing paths with a rooster, it reminds you to see the light at the end of the tunnel.

Hardships won’t last and no matter how painful your past might seem, you can always move past it and get through it.

In other words, no situation is too tough or dark for you to handle as you’re so much stronger than you think.

When you keep repeatedly seeing the rooster wherever you go, this could also refer to a wake-up call that awakens you both spiritually and physically.

When you let the spirit rooster guide you, your life will turn around for the better.

You have more self-awareness and a better understanding of particular situations and events that take place.

Maybe this means that you need to take a break every now and then from working too much or have a better balance between your career and personal life.

Whatever it is, seeing a rooster constantly could indicate a wake-up call.

Similar to courage, another one of the rooster spiritual meanings is reminding you to be confident in your skills and abilities.

Let this spirit animal encourage you to own your confidence and branch out on your own.

Be confident with yourself and stop trying so hard to blend in.

There’s no need to pretend to be someone else for the sake of others.

The rooster animal is commonly known to represent confidence, so if you always come across it, it might remind you to feel empowered in your confidence and self-worth.

Lastly, another one of the rooster spiritual meanings is potential.

This means that you need to embrace your talents and skills and stop running away from them or denying them.

Whether it’s in the arts or sciences, talent is talent.

Stop trying to second guess yourself and just embrace what you’re naturally good at.

Most importantly, stop trying to compare yourself with everyone else.

You need to share your talent with the world, and that’s one of the things a spirit rooster animal is telling you.

If there’s one thing roosters are mostly known for, it’s their crowing abilities.

So if you notice roosters constantly crowing, it can signify an awakening call.

The rooster is reminding you to wake up from your sleep, and not in a literal way but a metaphoric way.

Maybe you’ve been sleeping on your career or something important in your life, and it’s time for you to wake up.

A rooster crowing reminds you to wake up from sleeping on your abilities, your career, or anything significant in your life.

A rooster crowing can also refer to a new beginning and hope.

A rooster spirit animal, as mentioned above, is known to be courageous and prideful.

If you resonate with this spirit animal, it means you’re fiery and high on energy.

In other words, you have a very vibrant and dynamic personality.

You’re optimistic, resilient, and you don’t let your mistakes define you.

Rather, you learn from them and take each one as an opportunity for growth and betterment.

You also never let your fear define you or back you down, but you use it to make you even more courageous and brave.

When it comes to the rooster power animal, this is reminding you to stay grounded if you’re serious about receiving the rooster’s energy.

This means you need to be responsible enough and focus on your long-term goals.

Maybe that means investing your time studying or just concentrating on what truly matters.

Aside from the other meanings above, the rooster could also refer to money, business, and luck.

So with the rooster power animal, it’s telling you to take your money and business more seriously in your life, in whatever way you can.

So invest in yourself, take yourself seriously, don’t undermine your abilities, and most importantly, don’t take things personally.

The history of rooster tattoo meanings has been around for so long, which is why certain sailors on a Chinese ship have tattooed pigs and roosters on their feet.

They held onto the belief that a rooster and pig would cut its own throat rather than swim, which would then save drowning sailors.

This is why it’s a known rooster spiritual meaning that they represent good luck in your life.

You can always opt to get a rooster tattoo, which means it will protect you through whatever happens in life.

Dreams aren’t entirely random as most often than not, they depict a particular meaning.

Especially when you keep dreaming about roosters, there might be something bigger at play.

It could also depict your extreme need to be validated or noticed by others.

Particularly for women, when you keep dreaming of roosters, it suggests feelings of worthlessness.

In Chinese culture, roosters represent hard work, diligence, and wisdom so if you dream about roosters, it means you’re exceptional in your career or profession.

Dreaming about a rooster and what it means depends on what your culture believes it to be.

For instance, if you dream about rosters in Hindu culture, this is considered sacred and believed to be a good omen.

Seeing a rooster in your dream can imply that you’re working hard towards your goals or that you should take it as a sign to work even harder.

It can also remind you you need to overcome a particular obstacle in your life.

There are several superstitions believed in roosters, one of them being good fortune.

It’s believed that when a rooster comes into your kitchen, good fortune and wealth are about to come into your life.

It signifies prosperity and an abundance of wealth in the household.

Another superstition and omen that revolves around the rooster is connected to Feng Shui.

Having a statue of a rooster is believed to be highly beneficial, especially when you share an office with others.

After all, rumors and gossip are typical in an office environment.

According to Feng Shui, having a statue of a rooster on your work desk will protect you from gossip.

It also gives you the peace of mind to prevent you from worrying about what others keep saying about you.

Another superstition is the most common of all that involves the Year of the Rooster.

If this is your Chinese zodiac, then you’re believed to be a good organizer, and you have an eccentric and entertaining personality.

The rooster animal totem tells you to be brave, especially as roosters represent courage.

If you observe how this particular animal walks, its head is held high.

Roosters face challenges with a lot of courage and energy, despite the many opportunities of fear.

So people who resonate with this totem are known to be brave and courageous.

Even in moments of fear, they know how to express themselves.

The rooster totem animal stands for aspects like pride and self-confidence, compared to the rooster animal standing for courage and pride.

If you see a rooster within your sight or observe this particular animal, it’s a proud animal.

This is the reason why a rooster crows loudly and really doesn’t care about who hears its loud crow.

The history of the black rooster generally refers to death, night, danger, and evil.

If you notice in fighter roosters, the white color on their tails signifies cowardice and their disinclination for battle.

In several parts of the world, the rooster is a sign of the sun, which explains why several brands have made the rooster their logo.

This is because, like the sun, the rooster represents radiance, energy, light, and hope.

The black rooster symbol also has a historical significance as it’s been around since the 1200s.

Rooster Symbolism In The Bible

There are many biblical representations behind particular animals, including even roosters.

The rooster represents Peter’s denial of his faith and belief in Christ and stands for his repentance and remorse.

This is why the rooster stands for a call to repentance in a biblical context.

In other cultures, the roosters crowing at dawn is also a biblical symbol for the triumph of light over darkness and life over death.

Is a Rooster Good Luck?

According to Feng Shui, the rooster represents good luck and prosperity.

You can often see gold-plated statue roosters being sold, especially when a new year is about to enter.

This is because the rooster symbolizes good fortune, wealth, and even love and happiness.

So when you bring a rooster statue into your home, this has been said to bring your household good luck and even an abundance of wealth.

In conclusion, I hope this article was able to help you gain insight into the significant rooster spiritual meanings.

There are several aspects that a rooster spirit animal represents, such as confidence, courage, positivity, and even awakening.

In certain cultures and households, the rooster is also believed to represent good luck, prosperity, wealth, money, and career.

This is why a Feng Shui Rooster is often placed in the households of those who hold on to this belief.

Seeing a rooster constantly within your path or even in your dreams usually has a more significant meaning than what meets the eye.

Maybe it’s giving you the go signal to work harder on your career, or maybe it’s revealing a particular problem in your life.

Hopefully, with these spiritual meanings, you’re able to see things with more clarity.

Why Writing Things Down to Manifest Works