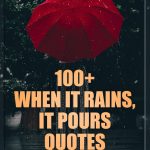 You've heard the old saying, when it rains, it pours. Well, there are plenty of other sayings that have the same sentiment.

Some are unattributed, while others have come from celebrities, authors, and many others.

These quotes can range from inspirational to humorous, and everything in between. No matter how bad of a mood you are in, at least one of these quotes is sure to lift your spirits.

Today we are going to take a look at some of the most popular “when it rains” quotes, as well as many you may have never heard before.

When it Rains, it Pours Quotes

2. “Success is not final, failure is not fatal: it is the courage to continue that counts.”

4. “Many of life’s failures are people who did not realize how close they were to success when they gave up.” – Thomas Edison

5. “Every adversity, every failure, every heartache carries with it the seed of an equal or greater benefit.” – Napoleon Hill

6. “Failure is an option here. If things are not failing, you’re not innovating enough.”- Elon Musk

7. “There are a lot of truths in this world. When it rains it pours. It’s always darkest before the dawn. He who smelt it dealt it.” – Rob Thurman

8. “After the rain, the sun will reappear.” – Walt Disney

9. “The rain didn’t make things messy. People did that all on their own.” – Barbara Delinsky

10. “When it rains, it pours but soon the sun shines again. Stay positive. Better days are on their way.”

11. “All birds find shelter during a rain. But the eagle avoids rain by flying above the clouds. Problems are common, attitude makes the difference.” – Apj Abdul Kalam

12. “Like a welcome summer rain, humor may suddenly cleanse and cool the earth, the air, and you.” – Langston Hughes

13. “Do not fear the rain is only here to help you grow.” – Jennae Cecelia

15. “I feel most at peace when it is raining for it reminds me that the sky is alive.” – Taylor Ashley

16. “When it rains, it pours – figuratively and literally.” – John Cornyn

18. “Many of life’s failures are people who did not realize how close they were to success when they gave up. – Thomas Edison

19. “It always rains the hardest, on the people who deserve the sun.”

20. “If someone truly loves you they will walk in the rain with you. Maybe even play in the puddles.” – Tammy Ames

21. “Let the rain kiss you, let the rain beat upon your head with silver liquid drops. Let the rain sing you a lullaby.” – Langston Hughes

22. “When it rains, it pours. But, that's okay because rain is refreshing and makes everything grow.” – Alan Young

RELATED: 120+ Life Goes On Quotes For Whatever Life Throws Your way

Inspirational When it Rains It Pours Quotes

24. “When it rains it pours. That’s when I call on the Lord. He’s my protection, my umbrella, my sword.” – Noel Jones

25. “When it rains it pours. Maybe the art of life is to convert tough times to great experiences: we can choose to hate the rain or dance in it.” – Joan F. Marques

27. “When it rains, it pours. True in most of our lives. But know that after every storm, the sun will eventually shine and a rainbow will soon follow.”

28. “Do not fear mistakes. You will know failure. Continue to reach out.” – Benjamin Franklin

29. “Think like a queen. A queen is not afraid to fail. Failure is another steppingstone to greatness.”

31. “Clouds come floating into my life, no longer to carry rain or usher storm but to add color to my sunset sky.” – Rabindranath Tagore

32. “Failure is the condiment that gives success its flavor. – Truman Capote

33. “Rain makes me feel less alone. All rain is, is a cloud- falling apart, and pouring its shattered pieces down on top of you. It makes me feel good to know I’m not the only thing that falls apart.” – Lone Alaskan Gypsy.

34. “Failure is success if we learn from it.” – Malcolm Forbes

35. “The only real mistake is the one from which we learn nothing.” – Henry Ford

36. “Be strong now, because things will get better. It might be stormy now, but it can’t rain forever.”

37. “Before something great happens, everything falls apart.”

38. “Sometimes when it rains it pours. But, I promise it will be okay.”

39. “There is no failure except in no longer trying.”

40. “Life’s not about waiting for the storm to pass. It’s about learning to dance in the rain.”

41. “And when it rains on your parade, look up rather than down. Without the rain, there would be no rainbow.” – Gilbert K. Chesterton

42. “Life’s not about waiting for the storm to pass. It’s about learning to dance in the rain.” – Vivian Greene

43. “A little rain each day will fill the rivers to overflowing.” – Liberian Proverb

44. “As rain falls equally on the just and the unjust, do not burden your heart with judgments but rain your kindness equally on all.” – Buddha

45. “As the rain soaks into the ground, so pray the Lord to let his gospel soak into your soul.” – Charles Spurgeon

When it Rains it Pours Quotes from Yusuf Hamza

46. “When it rains tribulation, it pours mercy. When you are drowning in the sea of difficulty, the lifeboat of ease comes to pull you out.” – Yusuf Hamza

47. “Everyone’s a believer when things are going fine. The real faith is when one becomes patient with tribulations.” – Yusuf Hamza

48. “We live in the age of Noah (a.s.) in the sense that a flood of distraction accosts us. It is a slow and subtle drowning. For those who notice it, they engage in the remembrance of God. The rites of worship and devotion to God’s remembrance (dhikr) are planks of the ark. When Noah (a.s.) started to build his ark, his people mocked him and considered him a fool. But he kept building. He knew what was coming. And we know too.” – Yusuf Hamza

Funny When it Rains it Pours Quotes

49. “Mr. President, when it rains it pours, but most Americans hold their own umbrellas.” – Sarah Palin

50. “Just when you’ve had enough, life gives you more. And just when you think it’s rained enough, it starts to pour.”

51. “I got a smile that’ll make the mirror crack, and I seem to stay under clouds that are pitch black. So when it rains, it pours, and when it pours, I’m soaked.”

52. “If life doesn’t break you today, don’t worry it will try again tomorrow.”

54. “When people try to rain on your parade, poke them in the eye with your umbrella.”

55. “When it rains, it pours – figuratively and literally.” – John Cornyn

Short Unattributed Quotes Similar to When it Rains it Pours

64. “If you’re not prepared to be wrong, you’ll never come up with anything original.”

More When it Rains Quotes

66. “Everybody wants happiness nobody wants pain but you can’t have a rainbow without a little rain.”

67. “Being soaked alone is cold. Being soaked with your best friend is an adventure.” – Emily Wing Smith

70. “Don't worry about failures, worry about the chances you miss when you don't even try.” – Jack Canfield

71. “The sun after the rain is much more beautiful than the sun before the rain.” – Mehmet Murat Ildan

73. “Thy fate is the common fate of all; Into each life some rain must fall.” – Henry Wadsworth Longfellow

74. “Skillful pilots gain their reputation from storms and tempest.” – Epicurus

RELATED: 101 After The Storm Quotes to Help You in Difficult Times

75. “I love rain. It makes me feel like it’s not just me – that other people are feeling it too.” – John Green

76. “Rain is grace; rain is the sky descending to the earth; without rain, there would be no life.” – John Updike

77. “The drops of rain make a hole in the stone, not by violence, but by oft falling.” – Lucretius

78. “The best thing one can do when it’s raining is to let it rain.” – Henry Wadsworth Longfellow

79. “Give thanks for the rain in your life which waters the flowers of your soul.” – Jonathan Lockwood Huie

80. “Do not be angry with the rain; it simply does not know how to fall upwards.” – Vladimir Nabokov

82. “The nicest thing about the rain is that it always stops. Eventually.” – Eeyore

83. “If the rain spoils our picnic but saves a farmer’s crop, who are we to say it shouldn’t rain?” – Tom Barrett

85. “Celebrate the rain; it only means that the sun shall shine bigger and brighter than ever.”

86. “Colors shone with exceptional clarity in the rain. The ground was a deep black, the pine branches a brilliant green, the people wrapped in yellow looking like special spirits that were allowed to wander over the earth on rainy mornings only.” – Haruki Murakami

87. “Only a select few can see the true beauty that lies behind what just might seem like a rainy day or a grey sky.” – Jessica M. Laar

88. “Like the sky opens after a rainy day we must open to ourselves. Learn to love yourself for who you are and open so the world can see you shine.” – James Poland

89. “Some people are making such thorough preparation for rainy days that they aren’t enjoying today’s sunshine.” – William Feather

90. “A rainy day is an equalizer. You don’t know what’s going to happen. You just take what you can get.” – Charlie Harvey

91. “God is good for everybody. The sun shines on good people and bad people, and it rains on both, too. God doesn’t choose rain only for bad people.” – Mariano Rivera

RELATED: It’s How You Get Back Up: 101+ Life Knocks You Down Quotes

92. “Life is full of beauty. Notice it. Notice the bumble bee, the small child, and the smiling faces. Smell the rain and feel the wind. Live your life to the fullest potential, and fight for your dreams.” – Ashley Smith

93. “Umbrella is comfort, rain is life! You must often leave comfort to touch the life!” – Mehmet Muratildan

94. “The universe acknowledges the value of your tears; for when it rains, it is shedding its own.” – Matshona Dhliwayo

96. “For after all, the best thing one can do when it is raining is let it rain.” – Henry Wadsworth Longfellow

98. “I am sure it is a great mistake always to know enough to go in when it rains. One may keep snug and dry by such knowledge, but one misses a world of loveliness.” – Adeline Knapp

Celebrity When it Rains it Pours Quotes

99. “Rejection is the greatest aphrodisiac.” – Madonna

102. “I always like walking in the rain, so no one can see me crying.” – Charlie Chaplin

105. “Through all the rain and the pain, you gotta keep your sense of humor.” – Tupac Shakur

107. “He who is not courageous enough to take risks will accomplish nothing in life.” – Muhammad Ali

108. “You know it’s funny, when it rains it pours they got money for wars, but can’t feed the poor.” – Tupac Shakur

109. “You have to be able to accept failure to get better.” – Lebron James

What Was Your Favourite When It Rains, It Pours Quote?

We hope you enjoyed reading more than 100 “when it rains, it pours” quotes.

Did you find any of these quotes mirroring your own thoughts about life in general, or even about rainy days?

Which quote resonated with you the most?

Please let us know in the comments below as we'd love to know.