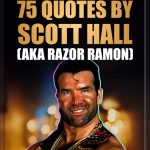 It’s impossible to be a fan of wrestling and not know the legendary Scott Hall, who is also known as Razor Ramon.

As a WWE Hall of Famer, Hall helped the world of professional wrestling gain critical acclaim and attention worldwide.

He was born on October 20, 1958, into a military family that was often on the move since they were under the U.S. Armed Forces.

He graduated with a degree in pre-medical, but his passion for wrestling soon began to unfold.

It was in 1984 when he debuted his name in wrestling and started to use his character name Razor Ramon in 1992 when WWF signed him.

In memory of him, here are some of the best Scott Hall quotes to help you recall the majestic career of this wrestling pro.

1. “It comes back to what Chief Jay Strongbow told us years ago, ‘In this business you can make friends or you can make money'. And I remember lookin at Kev and X-Pac and going, I already got some friends, I'd like the money.”

3. “I am not a Bret Hart fan. To me Bret’s really selfish, if you watch, there’s points in that match where I’m hitting Bret with what’s regarded as a hell of a working punch.”

6. “I think the best thing I can do for me is to show up places and be clear-headed. Because when I'm clear-headed, my phone rings. I get opportunities.”

7. “God has blessed me many times. I had some great genetics.”

10. “Mental illness is real, and I got them. I don’t know if it’s the multiple concussions or the lifestyle choices.”

12. “I’m hitting Bret, and he’s not even moving, he’s not even registering it. It was what it was, he was the new champion, and he needed a win, which he got.”

13. “Obviously, I’m against bullying, but it does happen.”

14. “I had been successful in Japan, Mexico, and Puerto Rico, but nothing in the U.S. where it really matters.”

17. “What I want to do is bring back managing in the wrestling business.”

18. “I would consider myself one of the highest-paid job guys in history.”

19. “I never really thought about the fact I wasn’t world champion. It’s all fake, so having a belt really means having extra weight in your luggage.”

20. “My daughter is on an academic scholarship at the University of Central Florida. I feel so blessed.”

23. “All I've ever done is work in bars and be a wrestler; I often wonder if I'd have pumped gas, would I have been a womanizer and had addiction problems?”

24. “You can't control the weather, but there are definitely things you can do to protect yourself and the investment you've made in your boat. The key is to get started early so you have the supplies you need and you have a plan for what you're going to do with your boat.”

25. “I'll go on record and say it's way more fun riding in front of a cop car then riding in the back cuz you can get out if you want to.”

26. “Shawn Michaels really helped me a lot. We helped each other. It was a good partnership.”

27. “I have been to rehab nine times. They were high dollar and some of the best ones around. Vince has picked up the tab the last couple of times. If you ever work or worked for WWE, if you ever need help, he will give it to you. He is really cool. Thanks to Vince, his wife Linda, Stephanie, Shane and Paul. Thank you for helping me. It's hard to ask for help. It's even harder to accept it, when people offer it.”

28. “One of the biggest insurance mistakes boat owners make is endorsing their boats onto their homeowners policies, which may not cover their losses from a major storm.”

31. “No matter how many times you fall, you can’t stay down forever. You need to get back up on your feet and carry on.“

32. “My life is like driving down a road. I occasionally glance in the rearview mirror, but I'm not focused on the past or looking back anymore.”

34. “My most important legacy is being a good father to my two children.”

35. “Bad times never last. In the end, everything turns out to be for the best. You just have to hold on until then without ever giving up.”

36. “If people are offering you help, swallow your pride and accept it because people who care about you want to help you.”

37. “I feel like I couldn't have screwed up that bad as a dad, because I have a pretty good relationship with both of my kids.”

40. “You don’t get any better unless you’re around guys who know more than you.”

43. “The only thing that I'm sure of is I don't know, but I know that positivity works.”

44. “I had the inability to ask for help when I needed it. People offered to help me, but I refused. They'd ask ‘How are you?' and I'd answer, ‘Better than you.'”

47. “Chico, I don’t need some armchair quarterbacking, some bookworm, telling the bad guy how to fight.”

51. “When the fans spend money, you normally leave the audience happy.”

53. “When guys leave NXT and go to the main roster, those guys are already over.”

54. “I’m happy for anybody who gets an opportunity or a break in the wrestling business.”

57. “I always wanted to be a main eventer in pro wrestling. I lived my dream, but the excess of the '80s and the huge money of the '90s became a great temptation for many of us.”

59. “For me, the only thing I had to look forward to was the ring because my personal life wasn't doing that great, so my fake life was what I was holding onto.”

60. “Whether they cheer or whether they boo really doesn’t bother me as long as they’re paying attention.”

63. “Hey! You people, you know who I am. But you don’t know why I’m here. Where is Billionaire Ted? Where is the Nacho Man? That punk can’t even get in the building. Me? I go where I want, whenever I want!”

64. “Everybody's going to have their own tolerance toward ribbing or bullying or whatever. If somebody's more sensitive, then you can't rib them as much.”

66. “I always find it really flattering when people are going to line up and wait in line for hours to tell you how cool you are and to take a picture with you. I always have time for that. It makes you feel good.”

67. “Powerbombing someone on the apron or into the turnbuckle, those are not moves Sting and I grew up with.”

68. “Everybody knows you can’t have a party on ‘Raw’ without the bad guy.”

69. “When I'm in the ring, I'm doing great. As Razor Ramon or the ‘Bad Guy,' I don't have a care in the world. But when I come back through the curtain, reality is there waiting.”

73. “When I came in, there wasn't a bunch of women wrestlers. There was maybe one or two who came in a couple months a year.”

Even if you weren’t necessarily a fan of him, thousands of people worldwide adored Razor Ramon.

And although this legendary wrestler has passed away, his legacy lives on, and many fans are still watching videos of his matches to preserve the memory of his mark on this world.

Which one of these Scott Hall quotes caught your eye and heart?

Let us know in the comments!