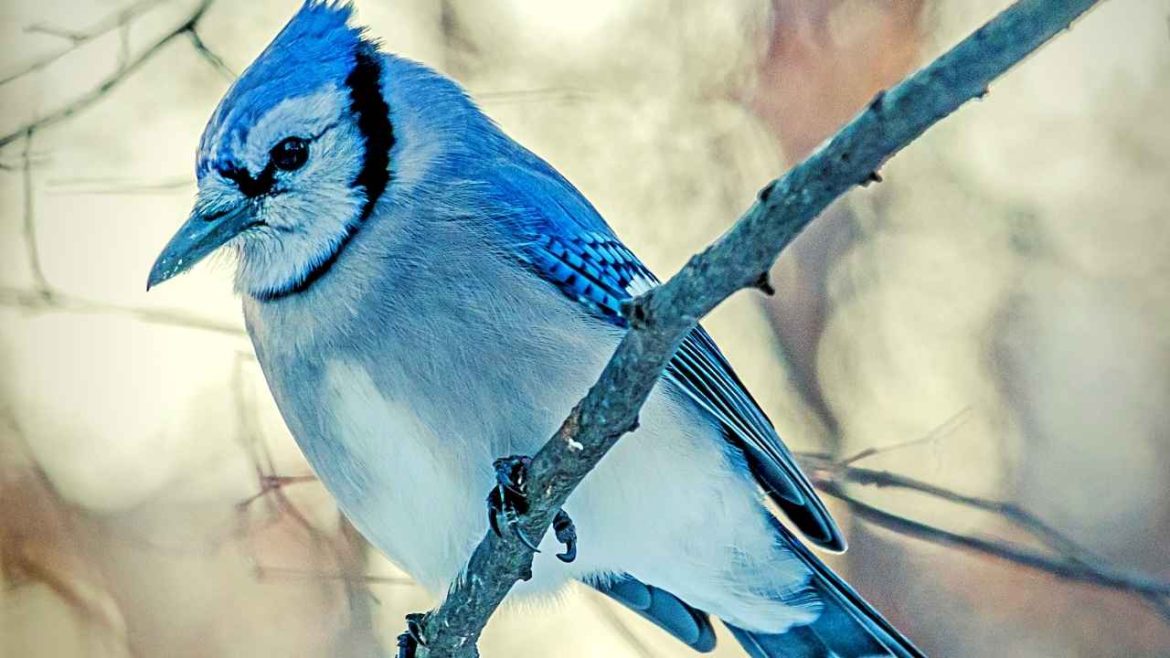 The blue jay has the most beautiful, striking plumage consisting of different shades of blue, from turquoise to indigo, interspersed with black, white, and gray bars, creating a dramatic effect.

It also has a cute little blue tufty crest. This very pretty bird is monogamous, meaning it finds a mate and stays with them for life.

Some of these characteristics are all too often missing these days in us humans, so can the blue jay spirit animal teach us a thing or two about forming and keeping long-lasting relationships?

Keep reading to find out about this very special little creature and see if it resonates with you.

It’s clear to see how beautiful this bird is on the outside with its beautiful bright colors, but let’s take a more detailed look at the inner character of the blue jay spirit animal.

The blue jay is a songbird with a whole repertoire of incredible sounds to call upon in any given situation.

It can mimic the cry of a hawk in order to ward off the would-be predator, away from the blue jay’s nest.  It can also mimic human sounds, such are its vast and varied vocal talents!

This amazing vocal skill translates into the blue jay spirit animal being a symbol of great communication.

Likewise, people who have blue jay as their spirit symbol are often very chatty and never short of words. They do well in teaching or sales, or indeed any speaking-type role where they can utilize this great gift of vocal communication.

This could also be one of the essential components of them making great life partners, as they understand the importance of verbal communication and don’t bottle things up, leaving them unspoken.

The blue jay is fiercely protective and will go to great lengths to protect its environment, partner, and young.

It can make an aggressive opponent when threatened, and so people with the blue jay spirit animal are generally very fearless folk, standing up to, protecting, and defending anything that they consider important to them, and they will almost always emerge the victor.

Being monogamous means the blue jay is a very loyal creature.

The male shares the duty of nest-building and raising the young alongside the female.  The blue jay spirit animal, therefore, has great family values and will go the extra mile to nurture relationships and make sure that they endure, no matter what difficulties may come their way.

This is a very loyal and faithful partner who believes in commitment for life, so no game-playing when this little guy’s around!

The blue jay is a very curious creature, and like the other members of the crow family, it has an irresistible attraction to shiny objects.

Just like its magpie cousin, it will peck away at these objects, often earning the reputation of being a thief.

In the blue jay spirit animal, this translates into a more positive trait – one of intense curiosity.  Those who have this spirit animal in their lives are often eager to experience new ideas and to travel down new paths of discovery.

In this way, the blue jay spirit animal also shows us how to take advantage of opportunities and take certain risks in life.

The blue jay has an unfortunate reputation of being aggressive in its quest to protect, but also to find its next meal, and will often kill smaller birds in nests to feed itself and its much-cherished brood.

The blue jay spirit animal, however, is more of an assertor than an aggressor.

Being one that doesn’t easily give up, the blue jay spirit animal knows how to assert itself in its quest to achieve the desired outcome. The assertion, when needed, usually also leads to determination and resourcefulness, both of which are gifts this spirit animal possesses and can bring to us when it is time to take a stand and make things happen.

These birds will keep going until they get what they believe is rightfully theirs.

Whether it be a nesting space, food, or partner, they are very determined creatures.  Often making their nests in oak and fir trees, which some Native Indians believe to also be symbols of endurance and longevity, the spirit version of the blue jay is a very enduring soul who will keep you on track to achieve great things.

They can certainly show us how to be better versions of ourselves.  Having a lively, talkative personality, a lot of people believe that seeing a blue jay symbolizes good things are on their way.

It also symbolizes that you should keep on going and not give up, staying determined until you finally reach your end goal.

Also, being a symbol of truth and solidarity, this is a wonderful animal spirit guide to call upon when you are struggling to be completely honest in a situation, and when trying to resolve conflict in your life.

As a totem, this little guy is very powerful and can assist you in many different ways.

Helping you to stand up for yourself, find your voice, and speak up when you should.  Maybe when you need to be more fearless against those who make you feel bullied, or those who may be a threat to your loved ones in any way.

You will be able to find the strength to assert yourself, speak truthfully, and openly with the blue jay’s guidance.

The Meaning Of Blue Jays In Mythology, Folklore, And Native Cultures

The blue jay is not always regarded as the nicest of characters, and in some folklore and mythology it is seen as a loud, boastful and aggressive bird, most likely because of the harsh noise it often makes, and its fearless defense of everything it holds dear.

In some Native Indian tribes it is viewed as a gossip-loving trickster, often sent to make mischief.

With the belief that it was in cahoots with the cunning foxes and coyotes, it was believed that the blue jay is a bird not to be trusted.

The tribes believed that if a blue jay was seen by their home, it meant that there was someone in the tribe with jealousy or bad feelings towards the other tribe members.

However, in other Native American tribes, the blue jay is seen as the bringer of clarity and vision.

The Sioux tribe, for example, believe that the striking blue of the jay’s plumage merges with the azure blue of the sky and brings with it a sense of dual vision.

They believe the brilliant and bright hues of blue bring about spiritual clarity, a truthful heart, and a pure soul.

In some folklore, the blue jay was thought to be carrying messages between dimensions.  In others, it was thought to have once been revered for its beautiful singing voice, always being asked to sing on demand.

This made it become boastful and pretentious until it was deemed necessary to teach him a lesson in humility.

Upon waking the next day, the blue jay went to sing but out came a harsh and grating squawk!

This new voice was believed to signify the blue jay’s true character.

So what does it mean to see a blue jay feather?

Well, I hate to tell you, but despite the beauty of the feather, it most often means that there is someone in your life who shouldn’t be trusted.

It is a sign that you need to be careful, as someone close to you could be lying or being deceitful in other ways.

So, be on your guard, watch out for manipulative people and have your antenna finely tuned into the deceit detection frequency – the blue jay will do the rest and guide you to the truth.

If you see a blue jay in your dreams, more often than not it means that you need to communicate more clearly.

You maybe need to speak up and assert yourself in a situation that is starting to get the better of you.

The blue jay could be telling you to vocalize your feelings and emotions to others in order to change a situation for the better. So take heed and learn how to open up and express yourself more freely.

Most interestingly, the throat chakra, which represents communication, is also blue and so the highly communicative blue jay resonates with this.

Other Potential Meanings Of Seeing The Blue Jay

The blue jay spirit animal is known to have amazing clarity of vision.

When you see a blue jay, it can symbolize your ability to see connections between your spiritual nature and your mind’s eye, if you only allow yourself to do so.  This results in strengthening your spiritual side, offering it growth and higher understanding, and from this, good things will come.

If a person dreams regularly about a Blue Jay, it can mean that they have already attained that higher level of consciousness and awareness that exists within us all, but stays undiscovered in most.

Indeed, there is a belief that any birds seen in dreams have been sent to us as messengers from other dimensions and a higher state of consciousness.

So if you are feeling trapped in a situation where you feel cornered and unable to fight your way out, call on the blue jay spirit animal to help you find the right words.

To give you the strength to assert yourself in the face of adversity, and the patience and determination to not give up until you have achieved what you want.

The blue jay will impart upon you its fearlessness, as well as its fiercely protective nature, extremely clever way with words, and its refusal to be defeated.

So take these gifts and utilize them to your advantage.

Most importantly, as with all spirit animals, show your gratitude, humility, and respect to the blue jay spirit animal, and he will continue to stay by your side guiding you safely through the pitfalls in life. 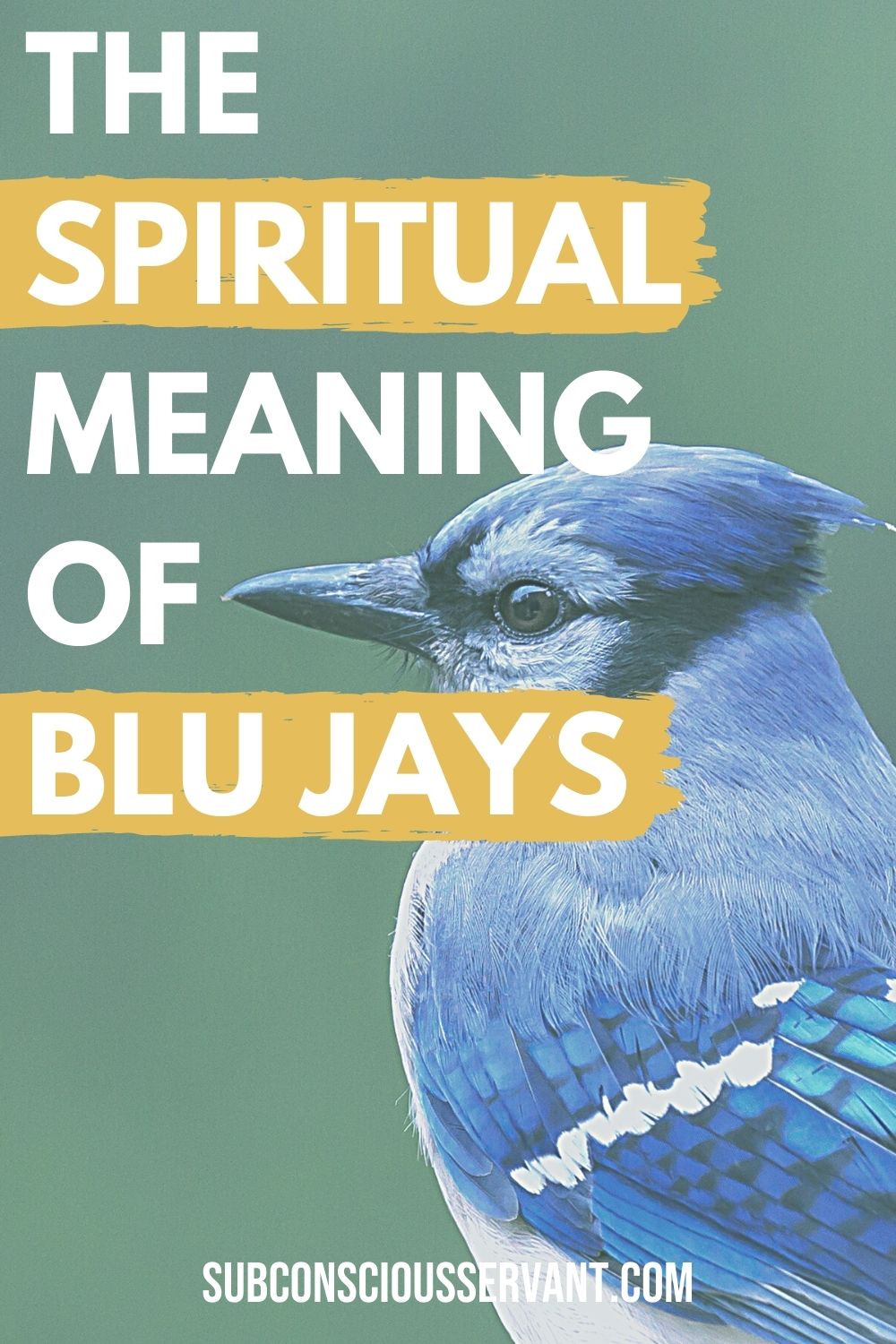 It’s not often I see a blue jay but I was lucky enough to notice one in my backyard today.