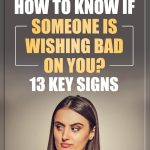 In life, there will always be people who wish bad upon you.

They want to see you fail in life and in everything that you do.

If you are successful, they will try to bring you down to their level.

They will do anything to make sure that you don’t succeed in life.

Some people are this way because they have low self-esteem and they feel worthless when someone else is successful.

They think that if they can bring down another person, then they will feel better about themselves.

In this article, we'll be discussing everything about how to know if someone is wishing bad on you and signs to confirm this.

How To Know If Someone Is Wishing Bad On You?

1. They hide their insults behind humor

One of the best ways to deliver an insult is with humor.

People wishing bad on you will make it seem like a joke, but don't fall for it.

Don't let them get away with it! Be brave and call them out if they say anything insulting or mean-spirited.

It's important not to let people think this kind of behavior is okay because then they'll feel free to do it again in the future.

2. You always sense their lies and deception

Do you always sense that someone is lying to you or hiding something from you?

If your gut tells you that someone is being dishonest, then it's probably true.

People wishing bad on you will often lie and deceive you because they want to take advantage of you.

They think that if they can control you, then they can hurt you more easily.

Don't let them get away with it! Confront them about their lies.

Let them know that you're onto them and that their deception won't work on you.

3. They invalidate your emotions

If you’re wondering how to know if someone is wishing bad on you, they will invalidate your feelings.

This means that they make you feel like what's happening isn't real or valid and could even be something that's not worth feeling upset about.

Some examples of invalidation include:

4. They don’t celebrate your successes with you

If someone is wishing bad on you, they will never be happy about your successes.

They may take credit for your accomplishments or minimize them in order to put themselves in a better light.

They may always try to one-up you and criticize you after your successes instead of being genuinely happy for you.

They will often be negative about their success so that they don't feel good about it.

They would also use excuses not to celebrate with the person who has just accomplished something great as well as make excuses why they can’t attend certain events where there might be opportunities to meet new people and grow their career.

5. There are conditions to your relationship

Another sign that someone is wishing bad on you is if there are conditions to your relationship.

For example, they might only be nice to you when you're doing something for them.

Or they might only talk to you when they need something from you.

If someone is only interested in you when it's convenient for them, then they don't really care about you.

They're just using you for their own benefit.

Don't let them take advantage of you! Set boundaries and make it clear that you won't tolerate this type of behavior.

Do you feel like you have to put on a persona around someone?

Do you feel like you can't be yourself around them?

If someone makes you feel like you have to pretend to be someone else, then they're not good for you.

They're not accepting of who you are and they're trying to change you into someone else.

This is someone who wishes bad on you because they want you to be unhappy whether they realize it or not.

7. A highly intuitive advisor says so

If you feel like something isn’t right, but you can’t quite put your finger on it—or if you just want someone to confirm that your intuition is correct—then find a highly intuitive advisor.

You need someone who can help guide and advise you through the process of making sure everything turns out for the best.

They can help you see things that you may not be able to see for yourself because they have experience with different types of situations and people.

They will also be able to give specific advice based on their own experiences, which will make them an invaluable resource in these kinds of situations.

8. They manipulate and gaslight you

Manipulation is a form of coercion.

It’s different from persuasion and can be hard to detect because it can be subtle.

Manipulative people are often skilled in the art of persuasion, but they also use other tactics that don’t rely on reason as much. They may:

9. They love your misfortune

When you are having a hard time, they are the first to know it and they will not forget to mention it.

They will remind you of your difficulties every chance they get.

They will make sure that their words hurt as much as possible and leave an impact on you.

You should be careful about people who relish in your misfortune because they're not good people.

They don't care about you and they just want to see you suffer.

10. They attempt to turn your friends against you

If someone is trying to turn your friends against you, then they're not your friend.

They're just trying to create chaos in your life.

People who wish bad on you will try to isolate you from the people who care about you.

They do this because they know that it will hurt you and they enjoy seeing you in pain.

If someone is trying to sabotage your relationships, then you need to cut them out of your life.

Things will be much better without them.

11. They will use everything against you

It’s important to note that it doesn't matter what you give them, they will find a way to use it against you.

They don't care if you've done something good for them or not.

They're going to find a way to twist that into something bad.

When someone is wishing bad on you, they will use anything from your weaknesses to your strengths against you.

They'll use your past history against you and make up lies about things that never happened so that other people believe them.

They'll even go as far as making up lies about the future in order to get people on their side.

There is a reason why these numbers keep appearing in your life.

If you are open to the angelic realm, they can be used as a way of communicating with them.

Angel numbers are recurring combinations of numerals that may appear anywhere, including when you check your bank balance, see license plate numbers on cars or street signs, and even read words in books and online.

They are a sign from your angels that they are working with you and want to help guide you in some way or another.

When this happens several times, it usually means something important is coming up in your life and it's time for a change!

In this case, it could be showing you that someone is wishing bad on you.

RELATED: Angel Numbers: A Guide To What They Are + Finding Yours

13. They hide feelings of resentment

You should be aware of the way they act when you ask them for advice or share an idea with them to get insight on how to know if someone is wishing bad on you.

If they seem to react negatively, it could be a sign that they're hiding their resentments toward you.

You should know that it's okay to question people and their motives, but if you feel like your partner or friend is trying to make you feel uncomfortable about asking for help or advice, then this could be a sign that there's more going on than what meets the eye.

If this happens frequently enough over time, then it's important to take action before things get worse!

What To Do When Someone Wishes Bad On You?

The first piece of advice on someone wishing bad on me is this – don't take it personally.

Some people think that if someone wishes bad on them, then they must have done something wrong or they must deserve it somehow.

But that's not true at all!

People say things like this because they are unhappy in their own lives and want to make others feel bad so that they can feel better about themselves for a moment.

It's called “projecting” and sometimes people do this unconsciously without realizing it's happening as people don't know what else to do with their miserable lives.

When wondering what to do when someone wishes bad on you, it's natural to feel angry and upset.

However, if you respond with anger, the other person will only be encouraged to continue doing so.

The best way to deal with this is by ignoring them or simply walking away.

It can also help to try to see things from a different perspective.

Think about what kind of person would wish bad on someone else.

Is this someone who has a lot of negative energy in their lives?

Or maybe they have been hurt in the past and they're still holding onto those feelings?

Either way, this person definitely needs some help before they can ever come close to being happy themselves.

You will know how to know if someone is wishing bad on you when they are jealous of you or your success.

If a colleague is always trying to make sure that you fail, then it’s time for some introspection.

Also, if people around you have been constantly gossiping about your failures, then it may be time to rethink those friendships.