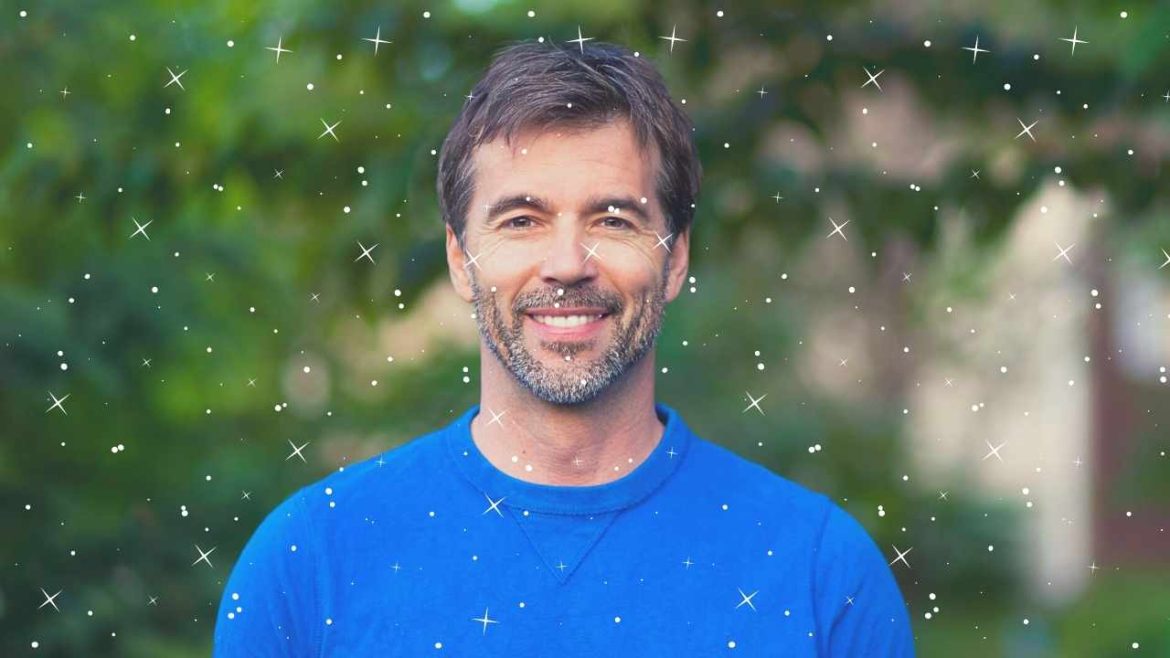 In relationships, there are significant ways we show we love our partner.

We all have different love languages, which is why it’s essential to communicate.

However, the problem arises when one becomes needy.

While this can be seen as affection, being needy can feel smothering most times.

Of course, this doesn’t instantly mean you should break up with him if he’s needy.

However, you do need to help him deal with it.

Otherwise, him being needy can end up sabotaging your relationship as a whole.

In this article, we’ll be talking about the signs of a needy man and what you can do about it.

1. He always misses you

It’s normal for him to miss you, as this is typical in any relationship.

However, what makes him needy is when he misses you all the time.

Constantly missing you 24/7 is one of the signs of a needy man you should be wary of.

There isn’t a day he doesn’t miss you, and that’s where it’s pretty evident he’s needy.

We’re not saying that when he says he misses you, that’s immediately being needy.

Instead, what makes him needy is when he always misses you, and there isn’t a moment he doesn’t.

His neediness shows by always wanting to be around you, which brings us to our next point.

2. He always wants to be with you

Quality time truly is a vital aspect of a relationship. It helps you get to know one another better and build intimacy.

However, a needy man will want to be with you all the time.

Whether it’s your errands, time with friends, or alone time, he always wants to be with you.

This is the aspect that makes him suffocating to be around – because of his neediness.

Even if you want space and time away from him, he doesn’t give you that. If he does, he ends up sulking the entire day.

Basically, he feels uneasy when you have a separate life outside of him in the relationship.

3. His routine revolves around yours

Even before you get in a relationship, you both have your significant routines.

Another one of the signs of a needy man is when his routine revolves around yours.

Maybe your routine is composed of working out or going out, and he adjusts his routine according to what you do.

Maybe he stopped doing certain things because of you, or he started working at precisely the same time.

This isn’t just being clingy, but it’s him being needy.

4. He’s all over your social media

We live in the age of social media, and most of our interactions happen online.

When dealing with a needy boyfriend, you might notice him all over your posts and comments section.

Even if it’s just sharing a Facebook meme, he still reacts.

He might’ve already liked all your photos, including those from years ago.

Also, he might’ve requested you to upload your picture together as a profile photo.

Now, if that isn’t being needy, we don’t know what else to tell you.

5. He always communicates with you

You might’ve already heard, but communication is at the core of every relationship.

What you have can quickly fall apart without proper communication.

However, you can see that he’s needy if he always feels the need to communicate with you.

If he constantly texts and calls you, even when you have absolutely nothing significant to talk about, he’s clingy.

He’s just looking for a reason to speak with you, even if it’s about nonsense things.

He probably asks you what you’re doing several times throughout the day.

This is one of the overlooked signs of a needy man.

When your relationship speeds through as if you’re skipping phases, it’s because your man is clingy.

He wants your relationship to speed up fast, even if you’re not ready for a particular stage yet.

Maybe he said, “I love you” too fast, or he wants to be exclusive right away.

This isn’t him being romantic, but it’s his neediness that’s reflecting.

He’s desperate to be officially yours and wants to make your relationship exclusive, even if you’ve only been on a few dates.

7. He gets upset when you spend time with your friends

Having significant alone time in a relationship is normal – healthy even.

However, when your man is needy, he won’t want you to spend time away from him.

He wants you all to himself and even if this is your friends we’re talking about, he doesn’t like the idea that you’re with other people.

This isn’t just unhealthy, but it’s also co-dependent and toxic.

When he never lets you spend time away from him and with other people, that’s evidently one of the signs of a needy man.

He feels uneasy that your life involves other people as he only wants it to be him.

8. He takes your alone time personally

Again, alone time is highly significant for your mental health and sanity.

So if you ask for time away fr a while just to unwind and relax, he takes this personally.

That’s how you know he’s needy and clingy.

Even if it’s as simple as playing video games or watching Netflix, he takes this personally.

He thinks your alone time is a reflection of your love for him when that’s not the reality.

So the ending is that you never have adequate alone time in your relationship and if you do, it leads to a fight or misunderstanding.

There’s nothing terrible with seeking reassurance.

We’re human, and we’re allowed to need reassurance from time to time.

However, the reason why one of the signs of a needy man is constantly needing reassurance is he requires this from you 24/7.

Even if you keep telling him the same thing, he asks for it yet again.

This is both exhausting and suffocating on your end.

Even if hearing reassurance is a good feeling, we shouldn’t require it from our partners all the time.

10. He doesn’t seem to have his own friends or interests

The core reason why he’s constantly attaching himself to you is that he lacks friends and interests.

He’s needy because his entire life revolves around you.

He doesn’t have any other friends, and he lacks hobbies and interests.

This is also why he basically adjusts his schedule and life around whatever it is you’re doing.

So what you’re hooked on at the moment is also what he’s doing.

Being physically clingy is one of the known signs of a needy man.

It might come off as affectionate and sweet at first, especially since you don’t know him that much yet.

However, this will be apparent as time goes by, and he seems incapable of keeping his hands off you.

He’s always hugging you, kissing you, putting his arms around you, and just touching you in general.

That’s a fine line between affection and borderline clinginess.

So if your man doesn’t know that line, it’s because he’s needy.

Is a Needy Man Bad?

It’s not that a needy man is necessarily bad, but it will feel destructive and suffocating for you.

A healthy relationship has no room for neediness.

There’s a difference between showing affection and just suffocating the other person, but needy people often don’t know the difference.

You can tolerate him but along the road, it will be hard to be with someone needy 24/7.

There will come a point when you want to give up on his neediness, even if his other traits are remarkable.

A needy partner can quickly become a co-dependent and even toxic partner, which is where the negative perception of neediness comes from.

What Does It Mean When a Man Is Needy?

A man being needy can mean a lot of things.

For instance, he could be needy because he’s seeking love from you that he never got in his childhood.

You need to know that neediness is often an internal issue and until he fixes that, there will always be a part of him that becomes needy.

So when your man becomes needy, there could be something he’s not dealing with.

It also means he can’t stand being alone or being on his own.

Remember what we said about neediness being interconnected with codependent behavior?

He’s incapable of being on his own, and that’s why he’s being needy.

It means he gets very attached right away and most likely, he was also needy in his past relationships.

How Do You Deal With a Needy Man?

The best way you can deal with a needy man is by confronting him.

Be honest and direct with him about his neediness, and let him know you’re not okay with it.

Reassure him that this doesn’t mean you don’t love him anymore, but you’re the type of person who respects your personal space and boundaries.

After confronting him, this is where you need to set firm boundaries.

It’s vital that you set strong boundaries when dating a needy man, especially as it’s so easy for him to cross your boundaries.

When telling him all of this, still practice empathy.

Imagine for a second that the situations were reversed, and it was you who was having trouble with neediness.

Especially if his neediness isn’t something he can control, you need to empathize.

It will take a lot of patience and trial and error to deal with a needy man, but you’ll eventually help him overcome it.

By spotting the signs of a needy man early on, you can set boundaries and confront him about it to help him overcome his needy tendencies for the sake of your relationship. 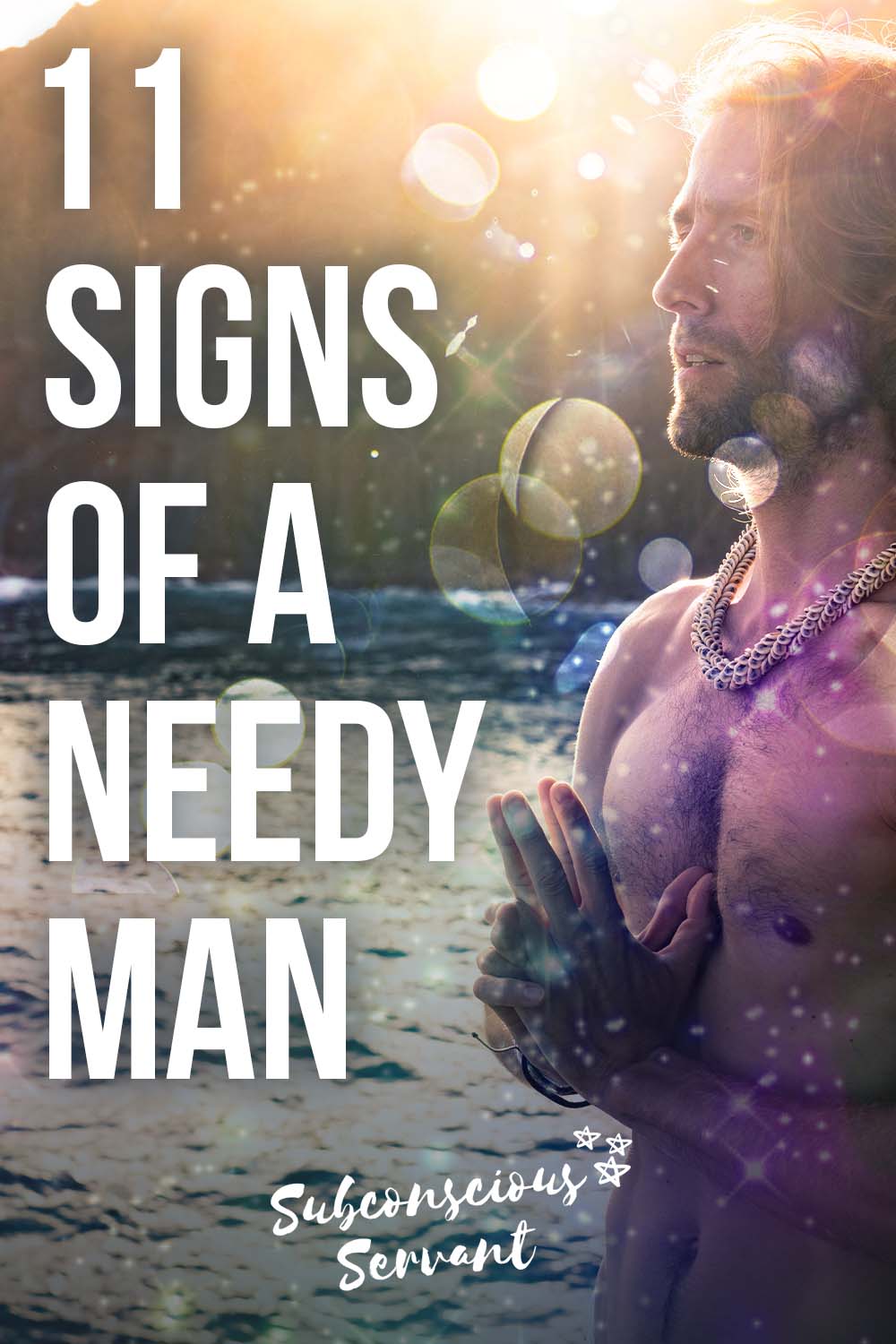 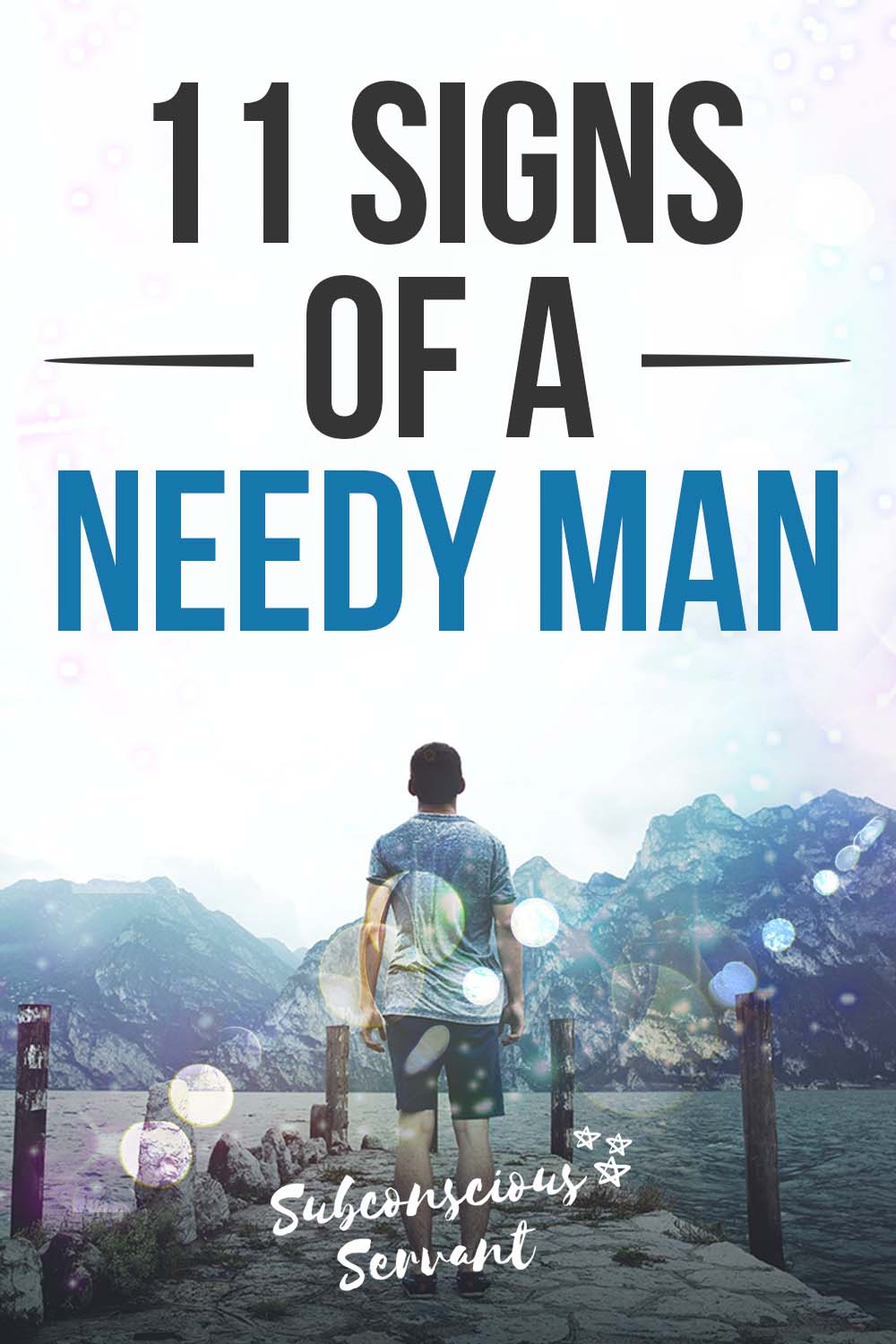 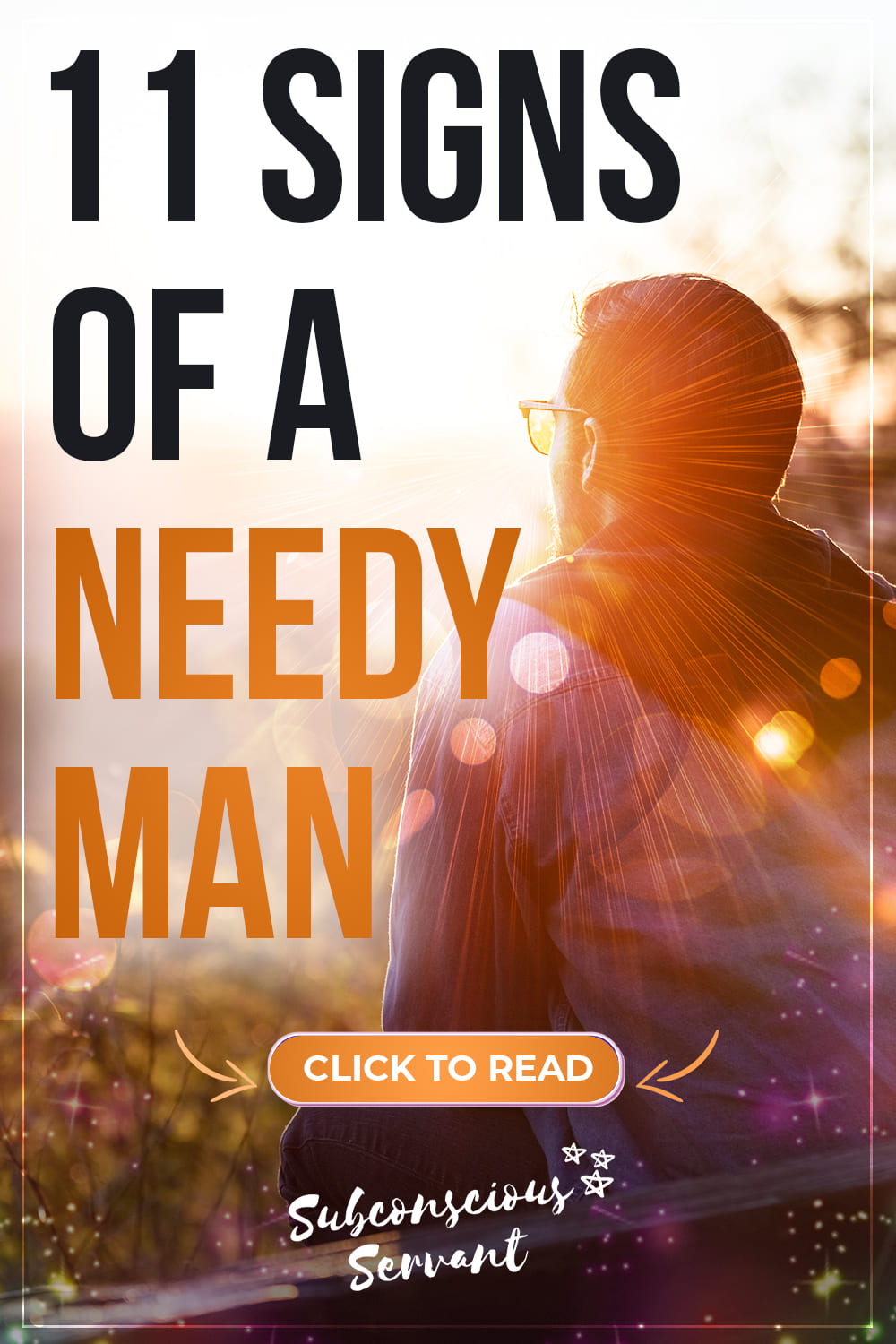 The History of Soulmates Based on Greek Mythology

Is Your Soulmate Manifesting You? 30 Must-Know Signs

Gut Feeling You’re Meant To Be With Someone?...

21 Signs Of An Instant Connection With Someone

15 Signs Of A Magnetic Attraction Between Two...