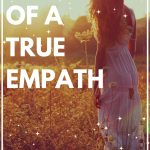 If you felt the desire to open this article and find out more about the main traits of an empath, you must already have a bit of understanding about the subject.

Maybe you have a background of general spiritual knowledge, and maybe even a hunch that you or someone close to you could be an empath.

With the vibration of planet Earth gradually rising over the last few years and all the changes that occur in people’s vibrational level and consciousness as a result of that, more and more empaths and natural healers are born.

This because people are starting to match the new vibrational level of a planet that is becoming a place of healing and spiritual growth for souls from all dimensions.

If you suspect that you or someone you know, might have out of the ordinary empathic abilities, proceed with reading this article in order to finally find out for sure!

Firstly, to be clear…

What Is An Empath?

An Empath is a person who possesses, to a certain extent, a sort of supernatural ability.

Empaths are very well in tune with the Universe (or The Divine Source, as it can also be named).

Therefore they are VERY SENSITIVE to everything that is happening above the physical realm, in the subtle dimensions of our planet.

In other words, by being able to sense someone’s energies, they can also feel those people's emotions and intentions.

Sometimes they even know what someone else is thinking.

Being an Empath is usually a sign that the person is an old soul being called to proceed with their journey on the path of healing others.

Empathy is the primary trait that a true healer must possess. But being empathic can be difficult, confusing and exhausting at times.

This is because the Empath may not be aware of their abilities and don't know how to protect their energy.

What Are The Most Obvious Signs Of An Empath?

There are a few landmark traits and behaviours of an Empath, that set them apart from other people.

However, having a few empathic traits it’s not enough for a person to be a true Empath.

It may simply mean that they have more empathy than the average person or that they are in the process of BECOMING an empath.

Empaths are very sensitive to energy.

This means that an Empath will instantly feel the energy of every place they go or person they come across, the energy of food or of objects that transmit information such as books or audio/video.

Nor will they take pleasure in reading books written about violence or watch horror movies.

Also, they might struggle to eat meat at times, especially if they do not know how to energetically cleanse it, because they will feel the energy of the animal that was killed.

So having said that, let's get into…

What Are The Traits Of An Empath?

This means more than just accurately identifying the emotion of a person and understanding how they feel.

Once they have picked up on an emotion, the empaths, especially the untrained ones will feel the emotion as powerfully as if it was their own, which can be confusing even when it comes to positive emotions.

Imagine bursting into laughter while you’re traveling home by subway with no obvious reason, but it can become a true burden when it comes to picking up negative emotions.

Taking on other people’s sadness, anger or fear can become daunting if the Empath does not know how to transform these emotions or remove them using Light and Positive Energy.

Trait #2: They Have A Very Powerful Intuition And They “Just Know Things”

This trait can be especially observed if you have an empath as a close friend.

If the connection between you two is very strong, the empath will know how you’re doing or feeling WITHOUT you telling them.

In fact, they might be “accidentally” calling when you’re feeling very down just because “they felt something is wrong”.

They might also have premonitions about natural disasters or negative events before they happen, but that is more characteristic of Empaths who have already trained themselves to become more perceptive.

As the core internal value of an Empath is the truth, they are able to detect people’s lies sometimes even without seeing the person’s body language, just by picking up the vibe that “something is wrong”.

In fact, if you are friends with an Empath you might have heard them using phrases like “I have a bad feeling” or “Something’s not quite right here,” and they are usually right.

What's fascinating is that Empaths are often right in sensing whether someone is lying, even without knowing the facts about the person in question, or the situation.

They don’t need to know “the facts,” they just need to tune in to the vibration of the person and they will spot the lie instantly!

Trait #4: They Must Avoid Crowded Places And Very Large Groups Of People

Because in a crowd there are plenty of thoughts and emotions all mixed together and most of them may not be positive ones.

The Empath might feel confused and scared by all the negativity they are picking up.

They might even feel like they are suffocating, from the abundance of energetic information coming towards them all at once.

Trait #5: They Like To Recharge And Purify Their Energy In Nature

Empaths will always have a special connection with nature (whether it’s the mountainside or the beach).

They will need time alone away from civilization because nature has a cleansing effect on people’s aura and also a grounding effect.

It is very useful for Empaths to spend time alone in nature, to meditate there, to do grounding exercises or long walks or even to just sit and absorb the sunlight.

If you recognize yourself in some of the behaviors previously described, then congratulations, you are an Empath!

While you may struggle to decide whether this is good or bad news, ultimately it's up to YOU whether your gift becomes a blessing or a curse.

If you fully understand your abilities and protect your energies accordingly, then you will be able to ENJOY the benefits of being an Empath.

You can use them for a higher purpose, transforming your life and helping other people in their spiritual journey.

Prepare for the moment when you will be guided towards healing others and accept this privilege with open arms, putting your abilities in the service of the Divine Source.

Alexandra, the head author at Subconscious Servant is a Psychologist, Reiki Therapist, and writer. She loves writing about any topic from Applied Psychology, Metaphysical and Spiritual healing, hoping that people on a spiritual, self-discovery journey will find guidance and light through her articles. If you want to read more about Alexandra, visit her full author bio here.

Clairaudience: What It Is + 7 Clear Signs You Have It

[…] ability is usually given to people whose purpose in life is to be healers, empaths, or to be in strong communication with the Divine […]

I've learned to take the light inside me and create a bubble to protect me ,but I'm still struggling with the spiritual side I get alot of visits from spirits I feel they take over me sometimes .they use me as a channel its very hard to go in public strangers loved ones will make me feel they're feeling s and it takes over me I find myself balling in public and hugging strangers or have the urge to tell them something,the spiritual world loves to wake me up at 3 every morning for the past year I have to cleanse my home regularly how do I strengthen my wall to the spiritual world so I can get a break

As an empath, how do we control the energies we are letting in??? It's so hard for me to block out loved ones from my emotions but if I don't it will literally kill me! I absorb any emotion they have and it's exhausting Any advice?

Rae Stone. You can literally decide within your mind to block it. I did it with the lie detector. Also, if that's to much you can ask your spirit guide to help do it for you. Learn to sort out each thing one at a time. Accept things as they until its their time to change.

I find this article very interesting I know that I am an empath, I feel everyone's emotions I feel negative emotions I can walk into a home and feel the energy. I don't really know how to control it I worry excessively and have anxiety attacks. I feel other people's pain and sadness and grief and I seem to keep it all with me it won't go away from me it won't leave me? So I don't know how to control my energy? If you have any advice that would be great!