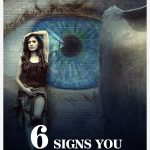 Consciousness begins in the mind. It is the mind. Everything that was ever said, done, or created was because of consciousness.

You might be thinking, “okay, but how does this apply to telepathy?”

Trust me. It does.

What is telepathy, and what are the signs that you have it? Telepathy is a form of extrasensory perception (ESP) that every human can access with a little practice. The six signs you are accessing your telepathic powers include third eye activity, being a human lie-detector, mastering psychic protection, and more.

The entire universe is energy. We are all divinely connected through this energy.

It’s easier to think of the universe as an ocean and humans as the waves within the ocean. We are simply apart of the entire whole.

Because of this, many people believe we all pull from a collective consciousness if you will.

Think of it this way. If we all are one consciousness, then we all have the ability to have the same thoughts.

To take it one step further, one can suggest the ability to send and receive certain thoughts, emotions, and even images with tailored practice.

In reality, as the collective consciousness and the frequency of the Earth continue to rise, it is only fair that we normalize the conversation of telepathy. Because let’s be honest, the mind is the most powerful source of energy in the universe.

It is the universe.

So we are doing it a disservice by thinking it is incapable of such a trivial skill.

The only reason humans ever used verbal and written communication is because we were separated so far from Source.

Whether we want to believe it or not, to exist in the physical plane, we have to be lower vibrational beings. As we continue to wake up as a collective, we raise our collective frequency, which brings us up to higher dimensions.

When your brain is in a higher state of consciousness or a higher dimension, verbal communication becomes less of a necessity because telepathic and energetic queues explain things in a way that words cannot.

But of course, just like anything else, there are exceptions to the rule. Twin telepathy is a great example of one exception. Continue reading to learn more.

Telepathy is one of the human senses that doesn’t get much recognition for being a human sense. So it might not be one of the five senses associated with the physical realm, but an elevated consciousness can fine-tune this sense with a little work.

Telepathy is the process of transmitting and receiving information through dark matter via brainwaves. It’s been widely believed that telepathy is a science-fictional superpower that only superheroes possessed; until now.

But before we can get into more of what telepathy is, we must first understand human design and the concept of nonlinear time.

In the physical sense, time is linear—the human body ages in a linear fashion. Similarly, the sun and moon rise and set each day to give the perception of linear time in motion. Interdimensionally, however, time is a nonlinear construct in which we can travel through effortlessly.

Another great example of this is experiencing deja vu. You are doing something and feel as though you’ve already been there before, even though you haven’t. In all actuality, your brain telepathically received a message from a version of yourself that has already done the specific task you are doing.

Pretty wild, I know, but bear with me.

You can teleport your mind to any point in time while still remaining in the Here and Now. Time is better described as a place rather than a method of measurement.

As it stands, scientists still aren’t sure if any other animals have consciousness or if it’s strictly reserved for homo sapiens. That said, humans are energetic beings with the ability to feel empathy towards and from someone else. Humans have the ability to dream and experience a feeling notoriously known as “deja vu.”

These are both forms of telepathy, but more on that later.

For the skeptics out there, science has shown us proof of telepathy via an EEG.

This test essentially captures the energy moving from one brain and entering another. However, in order for this process to reach completion, the two individuals must be energetically linked [aligned in frequency].

How do you align yourself with another frequency, you might be asking?

Well, with a lot of introspection and conscious effort, you can become aware of someone’s frequency and match it. That said, if you’re trying telepathy on someone that is naturally called into your life by the universe, chances are, your frequencies are already similar enough to start practicing with that person.

Common And Easy Types Of Telepathy

All the examples listed below are great ways to practice telepathy when first getting started because they include things that are potentially near and dear to your soul frequency. A good rule of thumb is to start with what you know. Keep things as easy as possible in the beginning, so there is less room for confusion.

Pick the most natural and go from there:

Many times, scientists have tried to catch Twin Telepathy in action and with little success. However, it seems most of what we know about Twin Telepathy has come through the ages from personal stories.

In most cases of Twin Telepathy, one receives a message or feeling that the other is hurt or in danger. Sometimes this message can make it to the physical realm and manifest as pain, tingling, or muscle weakness.

If you don’t have a twin, Mother-Child Telepathy, Human-Pet Telepathy, and Love Telepathy are all fundamentally similar to twin telepathy. The idea is that the two beings are so connected and aligned that mental communication is nearly inevitable.

Whether it’s on purpose or triggered by a survival instinct, finding someone you are energetically aligned with can catapult your telepathic skills right off the bat.

Another form of telepathy that is slightly different than the other types is Dream (Astral) Telepathy. This can present itself in a multitude of ways, but in more cases, the person telepathically transmits and receives a message to/from themselves.

Dreams work similarly to that of the akashic records. They don’t play by the physical laws of linear time. Instead, a dream can give insight into certain areas of life, which can later manifest as a premonition in the physical.

6 Signs That You (Or Someone Else) Has Telepathy

To be clear, anyone can access telepathy. It’s not even something that has to be learned, just remembered. It is up to the person to tap into this power through [sometimes] years of consistent and intentional practice.

There are, however, common signs that you’re fine-tuning your telepathy and becoming stronger:

Your Third Eye Is Going Nuts

When someone is actively working on their telepathic abilities, their third eye chakra will burst open if it isn’t already.

As the abilities becoming easier to access, the person will continue to feel physical sensations in their third eye.

Some of the common sensations include tingling, pressure, headaches, and more!

You Are A Master Empath

It isn’t enough to be an empath to become telepathic. The person must work to master the art of empathy.

This includes doing the shadow work empaths require so they can better learn their own emotions and how to identify when foreign emotional transmissions come in.

When your vibration is high, you are close with Spirit.

When you are close with Spirit, you can tap into the direct consciousness nearly whenever you want.

This includes reading through lies.

Yes, you are an empath and divinely channeled, but that makes you far from gullible.

The practitioner must learn how to not only protect themselves from psychic attack but practice until it’s second-nature.

There isn’t anything more important than your own protection at the end of the day.

You’ve Sent Or Received Thoughts In The Past

If you have ever thought about someone and then they called you or received a call after and the person said, “I was just thinking about you,” then you have experienced telepathy at one point or another.

Tips For Developing Your Telepathy

First and foremost, to learn how to access your telepathic abilities, you must commit to a life of self-development.

On this path, one must continuously revisit the depths of their soul and do the work to consciously transmute any and all karmic debt.

You must also make sure to practice self-care. Self-care is the only way you can continue to regain your strength to practice.

A great way to recharge is through consistent meditation practice.

Meditation calms the mind while teaching it to be open to receiving and sending messages. It also quiets the mind so you can more easily focus on the telepathic task at hand.

All that said, the only way to truly fine-tune your telepathic skills is through constant rigorous practice.

There are many different exercises all over the internet that can help you come up with a practice that is unique to you.

Remember, it is your mind, but it is also the mind of the collective consciousness.

Regardless of how impossible or out of reach it might seem now, telepathy is very much a real thing that is within your grasp. Keep going.

❤️ Related Posts You May Enjoy:

Nearing A Twin Flame Reunion? These 7 Amazing Signs Reveal If You Are – Subconscious Servant

[…] telepathy might be growing, or you might be feeling much more connected to mother nature and the […]

My sister had stopped taking her bipolar medication, gone manic and then went missing. Last thing she said to me was that she was going on an adventure. A few days later I had a dream that my sister drove a car off a cliff and then was drowning in the ocean below the cliff. It felt as if I was in the car with her. When I woke I told my Aunty about my dream and she started to call hospitals in north NSW as this was roughly where we thought my sister would have traveled to. Turned out that my sister got in a car accident near a beach then walked along the beach until she came to a cliff face where she decided to climb the cliff. She made it to the top of the cliff and then slipped and fell to the bottom and landed on the rocks. She had broken her back in two places and severed her spinal cord and the tide was coming in. She would have drowned there on the rocks if two fishermen hadn’t spotted her and got her air lifted out. The next day I was on a plane headed to the hospital as she needed her next of kin (aka me) to sign for her surgery as it was a 50/50 chance that she may not walk after the surgery. This was probably the most telepathic I have ever been. I’ve had other dreams too that have come true but my dreams have had family members in them and then when the story pops up on the news my family obviously wasn’t involved lol. I also call or message people and am always getting told “omg, I was just talking/thinking about you.” Or I will answer the phone to someone I was just thinking about 2mins prior. I would really like to know how to work on this skill so that I can maybe use it to help people, but I really don’t no where to start.