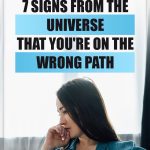 The Universe is the best and most helpful guide you will ever have on your path to success.

While we sometimes feel like we’re finally moving towards our dreams and goals, the universe may be sending you all kinds of red flags that you haven't seen.

Being able to understand these warnings and red flags can save your life (literally).

More often than most people would like to admit, we don’t amount to everything we’re capable of. (fact!)

This is because we focus too much energy and manifest our thoughts on the wrong path.

That being said, there are many signs you can watch out for to save you from this.

When we’re on the right path, we see our goals and dreams all around us.

Because when manifesting so much energy in positive visions, the Universe is sending more our way and moving us closer to our goals.

But, when we begin to lose interest in what we’re doing and stop loving it, it’s time to change.

The Universe is recognizing this and trying to tell you what you’re doing is wrong.

It’s trying to tell you to change course BEFORE it’s too late.

And not the kind that is fought with guns and bombs.

When you constantly find yourself fighting (either with yourself or with others), it’s a sign from the Universe that you need to CHANGE something and MOVE onto a path of peace.

One of the biggest signs that you’re on the right path is a general sense of peace and happiness.

Until you’re done fighting with yourself and with others, you will never be able to obtain a feeling of peace and bliss.

3. Your Relationships Have Stood Still.

We need human interaction to feel a sense of connection.

But what happens when these relationships seem to become stagnant? What does it mean when they seem to be draining us of energy?

Whether it be romantic or platonic. Relationships that suck us of all energy and positivity are ones that need to go IMMEDIATELY.

When the Universe senses that someone (or groups of people) are only leading you down the wrong path, it will do everything it can to show you.

And it may be tough.

But you need to STOP focusing energy on people who aren’t invested in your growth as well as theirs.

You need to be around people who encourage you to be everything you CAN be.

4. You Don’t Have A Good Feeling About Anything.

That gut feeling that tells you to keep walking past a sketchy ally or not pick up that person on the side of the road is the same one that can tell you when you’re on the right path or not.

The Universe knows when something isn’t right and it knows when you’re on the wrong path.

When you’re moving in a direction that is only making you stray further and further from your goals and dreams, this feeling will kick in.

When you have a gut feeling something isn't right.

Look at your life and figure out WHY.

Is it your job? Your relationships? A decision you just made?

Remember that nothing is set in stone UNTIL the action has been carried out and there’s nothing you can do to reverse it.

Sometimes all you need to do is listen to your gut.

5. Everything Is Going Wrong.

Do you seem to pour coffee on yourself right before every big board meeting? Or get a flat tire on your way to every job interview?

Maybe it’s for the better.

Maybe those interviews in that kind of work aren’t right for you, and maybe that executive position isn’t right for YOU.

Sometimes that Universe is changing your environment to show you that you’re on the wrong path.

When things keep going wrong no matter what you do to stop them, figure out WHY.

When you’re on the wrong path and moving in the wrong direction, the world will demand MORE from you.

Your work will be harder, your daily commute will be longer, and your arguments with your significant other will be harsher and meaner.

That’s just the reality of things.

And, over time, this energy will drain you of everything you have and make you feel exhausted.

And, unfortunately, no amount of coffee or Redbull is going to make you feel better.

The truth is that this is the Universe showing you that what you’re doing isn’t getting you to where you want to be.

If you’re on the right path, you would feel motivated and energized.

You would be constantly looking forward to tomorrow and getting ready for what’s to come.

NOTE: Being exhausted is NOT the same as being challenged.

When you’re on the right path, it is normal to feel challenged and experience a few sleepy nights, but it should not be a habit.

The goal is to feel like you’re pushing the limits of your life, not your life pushing your limits.

❤️ Related Post: 7 Signs From the Universe That You’re on the RIGHT Path

7. You’re Looking In The Past More Than The Present Or The Future.

When you’re on the wrong path and manifesting a future that isn’t right for you, you will always look back to the “good ol’ days”.

You always seem to miss what once was and have troubles looking at what’s ahead.

The Universe knows that you don’t like where you are or where you’re going, so it’s trying to show you a time where you were on the RIGHT path.

When you find yourself always looking back at the good days not happy with how things are TODAY.

Then it's time to start making your TODAYS as good as those old days.

The Universe is a mysterious thing that we might never fully understand.

It’s not black and white, but it is far from being unreadable.

Being able to read the signs and see the red flags that you’re moving in the wrong direction can save you a lot of time and effort.

One of the worst things you can do is turn your back on the Universe and not listen to it.

It shows you what you want. It’s up to YOU to interpret it for what it is.

❤️ Recommended: 7 Signs From the Universe That You’re on the RIGHT Path

I find these articles very educational and informative. I like to get all the information that I can. Even if I feel unsure, uneasy and possibly scared.

Your posts are very informative, I wish you all the luck in the future. IBSOL is a leading professional services company providing outsourcing services in the fields of Esi & PF Compliance Services Gurugram, Payroll outsourcing service In Delhi Human Resource Outsourcing (HRO), Manpower Outsourcing Services In Ncr, and consulting under Direct and Indirect Taxes.

All teas are premium on my site. Celeste is a top-rated site for the Best loose leaf green tea. All Black teas, green teas, white tea, wellness tea, etc. All tea gift boxes are available on my site. And teas blog are available my in this site. Your posts are very informative. I wish you all the luck in the future. Thank you, guys.

Thanks Alan and universe 🙏 😊 ❤