7 Amazing Traits Of The Sigma Female (Do You Fit The Type?)

Do you follow your own rules? Are you an independent woman who holds the attention of every room you go into?

Perhaps people see you as intimidating and might not know how to deal with your strong personality.

If so, you may be a sigma female!

The term sigma male is becoming more and more common, with loads of guys identifying with the label. But, did you know that anybody can have a sigma personality type?!

This includes women. We live in an equal society that champions men and women as the same, and therefore both men and women can take on these different personality archetypes.

Any gender can be a sigma, a gamma, a beta, or an alpha.

A lot of women relate to the sigma personality type. Sometimes it can be hard to be a powerful and independent woman, but it needs to be celebrated!

Read on to discover what the sigma female is and if you fit the type.

What Is A Sigma Female?

A sigma female is an independent woman who is not afraid to go against the grain. She is aware of societal norms and pressure, however, chooses to do exactly what she wants to do.

She is similar to the sigma male as she is happy to be alone and does not need other people to validate her.

Being a sigma female is amazing as you live your life your own way. You may be a little bit introverted, but have a lot of charisma and power too!

A sigma female is not a leader or a follower.

Instead, they are outside of the social hierarchy. They respect others and in return gain respect.

Are you relating to this at all?! Maybe you are a sigma female!

If you are relating to the description above, read on to discover sigma female traits and see if you fit this type.

So, what are the key signs that you might be a sigma female?

The main trait of sigma females is their independence. They do not rely on others for their happiness but rather do exactly what they want to do.

This means that they are really successful in their jobs and career, and gain respect from the friends and co-workers.

A sigma female rejects the social hierarchy and does not get influenced by others.

In the workplace, she will stand up for what she believes in and makes her voice heard.

Do you sometimes get called bossy by men you work with who can’t handle a powerful and independent woman?

Perhaps you are always the one to make a change in the office?

If so, you may be a sigma female!

Their independence also means that they are happy both single and in a relationship. They do not rely on other people for their happiness and know that life is what you make it!

They know that there are so many amazing experiences to have by yourself, and so many journeys to go on.

A sigma female will never settle in a relationship, and only date when they are ready to.

2. They Are Seen As Intimidating

Sometimes people can just not handle a strong female and will be very intimidated by the way that sigma females reject conventions and speak the truth.

They enjoy stirring things up a bit, making other people question social conventions. This can be intimidating to some people!

Because a sigma female does not need others to be happy, they might intimidate those who tend to follow the social norms.

When people do not know a sigma female, they will often be put off by how she appears to the world.

However, once somebody gets to know her, they soon realize that they are great people!

This is where sigma females surprise strangers. Even though a sigma female will not depend on other people for happiness, they make for great friends.

They are loyal to their true friends and value connections with others.

Because they are pretty independent, sigma females do not form loads of friendships.

However, they will form a few very strong bonds. The people who make the cut and become close friends with a sigma female should know that they have a friend for life!

Sigma females are extremely loyal and will always have your back when you need them.

If you are friends with a sigma female, count yourself as lucky!

A sigma female can be pretty hard to read sometimes.

They go against the grain and do exactly what they want to do, and are quite laid back about it all.

This means that many people find sigma females mysterious and because of this, they tend to get a lot of attention.

Because of the mysterious nature of a sigma female, a lot of people don’t really ‘get’ them.

Some people like to fit people in boxes, and when sigma females reject social norms, other people might feel threatened.

This can be a source of conflict and stress in a sigma female’s life.

Perhaps coworkers and acquaintances try and make things a bit difficult for the sigma female because they don’t like how they act and how they live their life.

If you are a sigma female and find people judge you for who you are, just remember that it is their problem and not yours!

You are living your best life and being true to yourself. If people are threatened by this, then they need to figure out why.

They are probably jealous of your way of living and your confidence!

5. They Can Fit Into Social Situations

Even though sigma females are pretty independent and don’t rely on others for happiness, they are pretty good at fitting into social situations.

Being on the outside of the social hierarchy means that the sigma female can blend in with whatever social group or situation that arises.

They do so well, being able to get along with so many different people from all sorts of backgrounds!

A sigma female sees everybody as equal and believes that if you give respect you will gain respect. Therefore, fitting into a range of social situations comes naturally to the sigma female.

They will never bend over backward for somebody, but will also never be rude to anybody for no reason.

Seeing everybody as equal and ignoring social conventions is an amazing trait of sigma females. If you relate to this, be proud of who you are!

In a world of social media, fast fashion, and new crazes, a sigma female will never follow the crowd.

When it comes to fashion, a sigma female will wear exactly what they want, whenever they want. They will not buy something just because it is in fashion, rather, they buy something because they like it and wish to have it for a long time.

A sigma female is always confident and comfortable in their own skin, wearing what they want and styling themselves however they wish.

They are not afraid to try out unique looks or crazy throwback styles. Sometimes, they can even be pretty out there with their look!

A sigma female will often be a bit of a trendsetter in their community.

Similarly, a sigma female does not post much on social media. They may use it and sometimes lurk about, looking at other people’s content.

However, they will never really post as they don’t crave the approval of others.

When it comes to social media trends, a sigma female has no idea what is going on!

They are doing their own thing, and that is most likely very different from what the majority of people are doing.

7. They Go At Their Own Pace

There is a lot of pressure on women in society today.

Pressure and expectations in regards to boyfriends, marriage, careers, jobs, and family life can all be really overwhelming!

Sometimes it feels like women have to be everything. They have to have a brilliant career, look great, and also be a caring member of their family.

Sigma females know this, but they go at their own pace. They will often reject the pressures from society and know that the only thing that matters is their own happiness.

They don’t see the point of following somebody else’s rules and expectations when they do not wish to live like this.

Because a sigma female goes at their own pace, they will often be content in their lives.

Following their own rules means that they know how to truly be happy within themselves.

Are you relating to the traits of the sigma female? Perhaps suddenly everything has started to make sense and you have come to an understanding of who you are!

If you are a sigma female, you may have noticed that a lot of men can’t seem to handle you.

You are strong, independent and do exactly what you want to do! Some guys are just a little too insecure for this.

So, you might be wondering… are sigma females and sigma men compatible?!

Because a sigma male is also an independent person who follows their own rules, they respect a sigma female and understand their beliefs and attitudes.

A sigma male will not be intimidated or threatened by a sigma female. In fact, they will be relieved to find someone who shares their own attitudes towards life.

Together, a sigma male and a sigma female can really create a healthy and solid relationship that is built on trust and respect.

A sigma male will need time alone and likes to travel a lot. A sigma female will understand this and let her partner explore the world when he needs to.

She does this because she knows that when it is her turn to travel, he will support her choice. There is a deep understanding of each other.

Sigma males and sigma females both tend to be loyal. This can mean that they can develop a really healthy relationship and not get jealous when one of them needs time apart.

A sigma female and a sigma male can create a beautiful and long-lasting relationship!

Be Proud of Who You Are!

If you have read this article and discovered that you are a sigma female, embrace this part of you!

There are so many fantastic traits and characteristics of a sigma female and their independence and attitudes towards society are things to be proud of.

If you are a sigma female, know that you are paving the way for other strong and independent women to be who they really are.

Following your own path and not letting society tell you what to do means that you will end up truly happy and content.

Enjoy the journey you are on and have fun every step of the way! 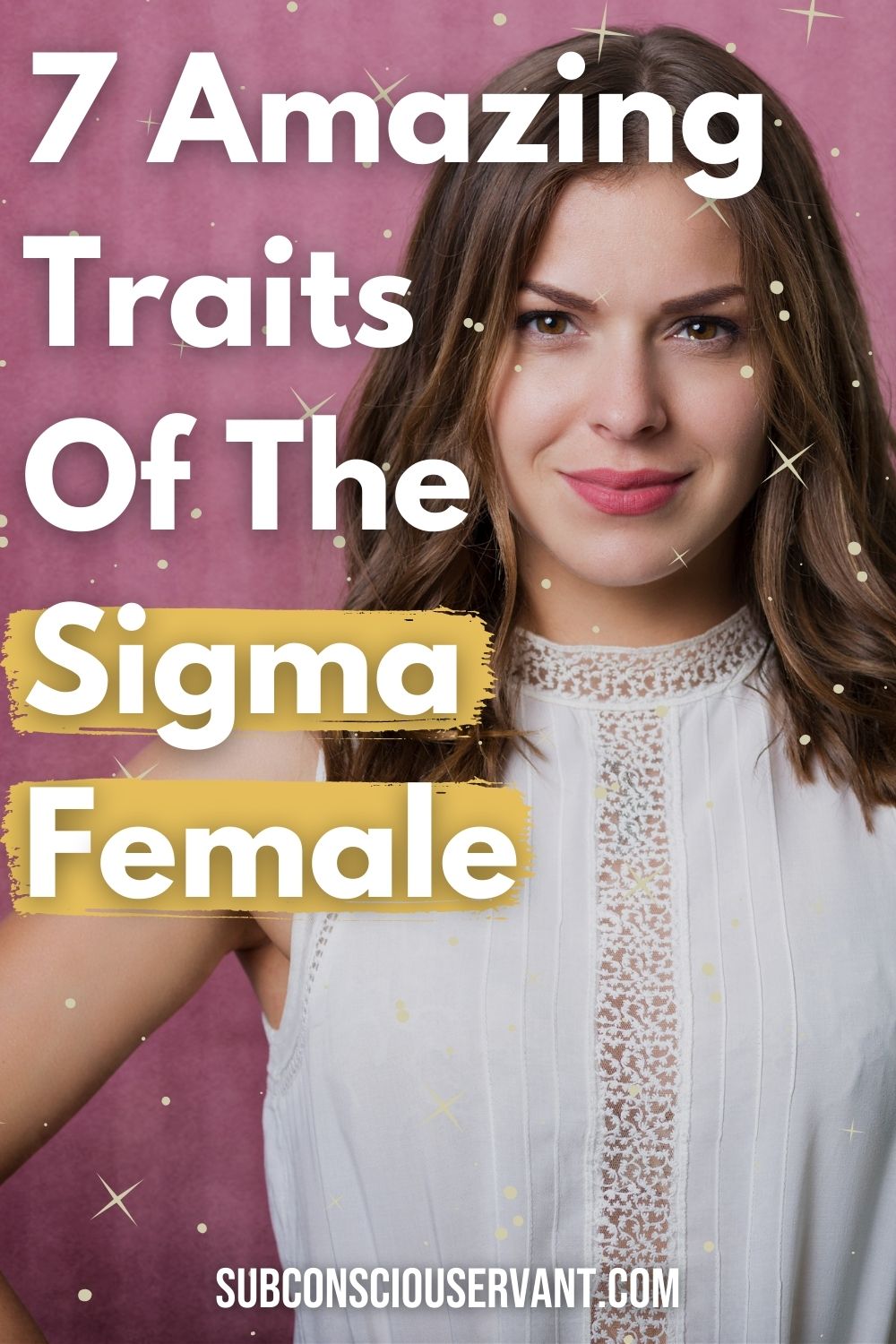 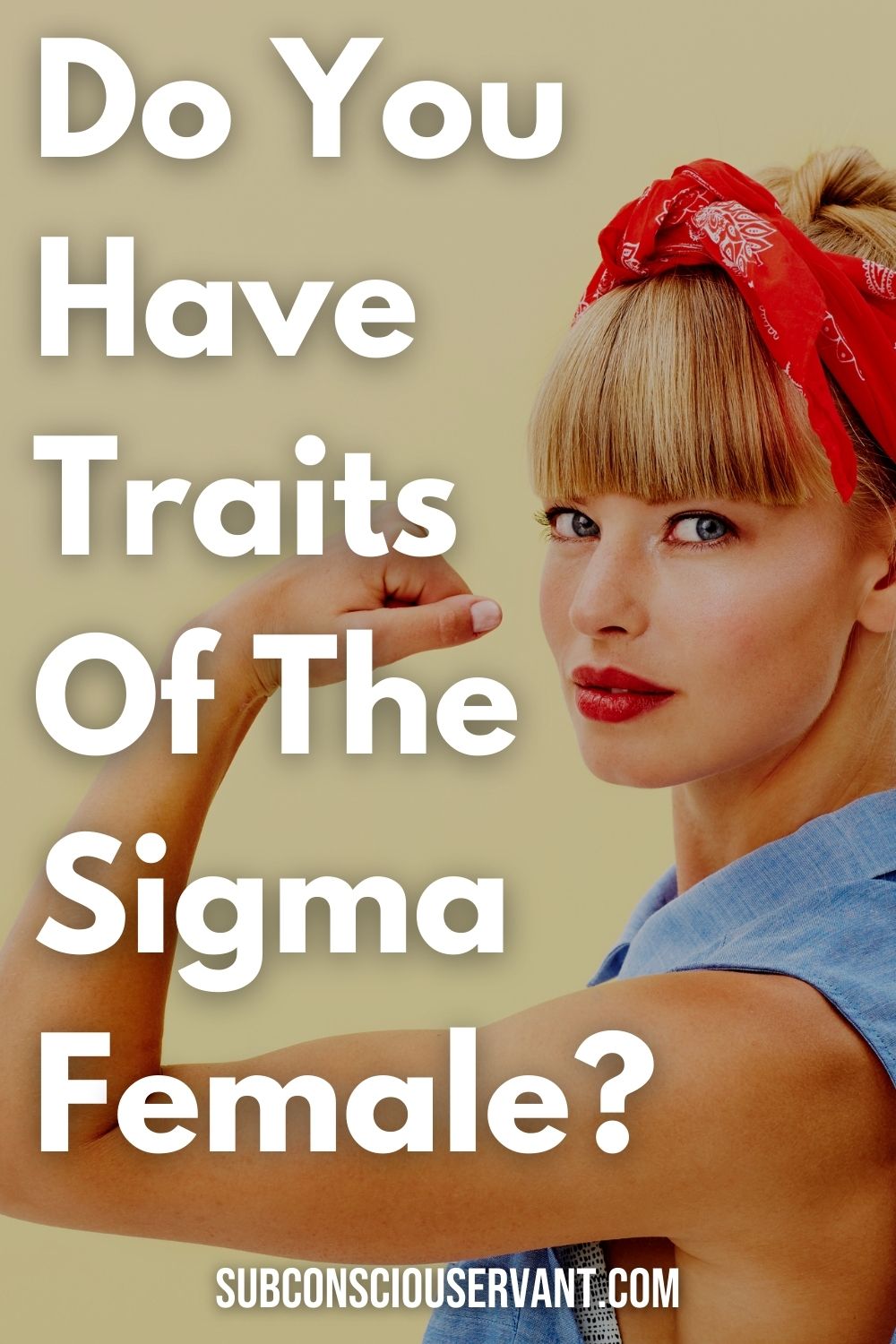 7 Telltale Traits Of The Gamma Male (Do...

How To Trust Your Intuition [When Making Important...