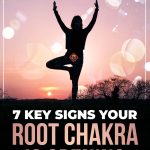 As you begin your journey of learning who you are and why you are here during such a transformational time in history, you are likely to stumble upon the teaching of the chakra system.

The root chakra (Muladhara) is the first chakra and lowest point of the subtle body.

As the base energy, it provides a sense of innate rooting from within when you activate it.

Once you begin this process of activation, you are likely to feel several common symptoms.

What are the symptoms of an opening root chakra? People experience things like releasing anxieties and limiting beliefs, eating healthier, and feeling at home within themselves for the first time. The root chakra holds a lot of trauma and karmic debt, so the manifestation of symptoms one feels when they activate it feels like one giant purge.

The root chakra is the base of your subtle body but manifests on the physical plane in a very real way.

Aside from the common symptoms of opening the root chakra, below, you will learn more about how to aid in this activation process.

The Root Chakra: What Is It And What Does It Mean To Open It?

If you want more information about what the root chakra is, then you probably have just started your journey learning about the chakra system.

I say this for the mere fact that the root chakra is the first in the chakra system and tends to be the starting point for many people in their journey.

The seven chakras aren’t as specific as the ancient chakras and are seen more like categories.

It is highly recommended that everyone begin their journey at the base or root chakra.

As the chakra system moves higher in the body, the energy centers focus less on physical matter and are more closely connected to Divine Source Energy.

If you aren’t rooted strongly in your foundation, it can cause problems later on, including things like:

As you can see, most of these symptoms are mental illnesses.

This is because most of our connection with Divine Source Energy is through the mind.

It is so important to take the best care you can of your mind, and you can do this via mental health exercises like affirmations, gratitude journaling, working out, and so much more.

What houses the mind, though? The brain.

What houses the brain? The body.

The body is the charging station for the brain and, subsequently, the mind.

One must first take care of the body to ensure a strong, healthy mind.

So What Does It Mean To ‘Open It’?

Now that you’ve made it this far, it’s clear to see that the root chakra is your energetic foundation.

So, when you open it, visualize yourself laying that strong foundation.

It is the chakra you will always come to first if another chakra is off balance. The root will provide the stability you need to balance the other chakra in question.

Opening your root chakra means you will experience many different symptoms.

Seven of the most common symptoms are listed below, but one thing not a lot of people talk about is how it can quite literally change your entire life.

The longer you suppress who you really are, the bigger the waves of change will be when the activation begins.

Let me make something perfectly clear.

This is nothing to be scared of. Perhaps the scariest part of what you just read is the fact that you’ve suppressed yourself [from yourself] for so long.

You will feel at home in your own skin, likely for the first time in your life.

You will feel a deep inner, rooted connection with the Earth, planets, other people, and the universe.

Not to mention the sense of stability and security that you are enough in this world.

Regardless of who you are or your background, everyone deserves to know what it feels like to be One with themselves.

Needless to say, your life is waiting for you on the other side of activating your root chakra.

The 7 Key Symptoms Your Root Chakra Is Opening

The below seven symptoms are things that nearly everyone feels as they open their root chakra.

If you think you’re activating your root chakra but aren’t having any of these symptoms, don’t get discouraged.

Everyone is unique, but the more you progress, the easier it’ll be to attune to your body’s frequency and understand how it feels on a deeper level.

In fact, that’s what activating the root chakra does in a nutshell.

Still, here are the seven key symptoms your root chakra is opening:

These symptoms occur in no particular order, but an overwhelming sense of grounding is usually a key indicator that your root chakra is opening.

A natural side effect of feeling grounded is a decrease in overall anxiety you might feel.

Maybe your heart rate is noticeably slower, and your mind isn’t crowded with irrational thoughts.

This feeling of groundedness is synonymous with being in the Now. When you live in the moment of Here, the present moment, there is no room for anxiety.

Fear creates anxiety, and fear is only present in the past and future.

Similarly, a feeling of connectedness will manifest soon after the feeling of groundedness.

This is the feeling that reminds us that we aren’t alone in the world.

There might be upwards of 8 billion people on the planet, but some days it can feel like you are left out of the biggest party in the universe, quite literally.

However, activating the root chakra brings you back into this blissful awareness that there are other people like you in the world.

Not only that, but you will feel more connected with the Earth as well.

Have you caught yourself thinking about how warm the sun felt today or how pretty a bird was?

This is a key indicator that you are connected.

It is extremely common for deeply blocked root chakras to manifest as eating disorders.

Once that blockage is cleared and the chakra finds its balance, that eating disorder won’t stand a chance.

I’m sure there will be a lot of skeptics out there, but it’s true!

When the root chakra is balanced, you naturally feel at home in your body.

You appreciate and love yourself just the way you are.

It’s a soulful healing that happens from the inside and quite literally balances the chemicals in your brain as well.

As a result, you are left with a better relationship with food because you respect yourself and your Divinity.

This symptom might seem vague, and that’s because it’s supposed to be.

It is typical for people to feel any sort of tingling or heat in the chakra area they are activating or balancing.

Regarding the root chakra, you could feel tingling or heat in:

5.  Ability To Listen To Your Body

The root chakra brings you back to the physical plane.

It anchors you to reality and stabilizes your life. In a personal sense, it gives you the tools to listen to your body.

Take getting sick, for example:

You feel the literal first symptom the sickness manifests.

It may seem like you have become more sensitive because you can feel even the faintest of symptoms.

In reality, you can hear your body when it talks to you.

As if someone turned up the volume.

Similarly, it has a way of increasing libido as well, which makes sense because the second chakra relates to passions within and without; sensual and sexual. (link underactive sacral chakra article).

Now, this can be a good and bad thing.

As mentioned above, when you first open your root chakra, it will likely bring up a few troublesome “side effects.”

Sleeping can be negatively affected, causing restless leg syndrome and other restless activity until the energy flows freely and balanced.

Once the root chakra is balanced, you can expect a better night’s sleep accompanied by vivid dreams.

Sleep is a vulnerable time for any living being.

You fall into this subconscious state, your body goes limp, and you stay this way for hours on end!

If knowing this triggers anxiety within, there are some apparent root chakra lessons headed your way.

The root chakra wipes away any trace of insecurity or instability in your being.

7.  You Gain A Sense Of Safety Within Yourself

There is no greater feeling than to feel supported and safe in your own skin.

Unfortunately, we can’t choose our upbringing.

So many people grew up feeling unsafe in their own homes. This put them in survival mode very early on.

When this mentality is engrained into the mind in this nature, it causes a calcification to occur.

Suddenly, you see your Self as a protective barrier, always with its guards up.

In reality, you are a powerful and spiritual vessel of energy and your body; Keeps. You. Alive.

Do you understand how magical that is?

Tips To Aid In Opening The Root Chakra

It is generally believed that our ancestors are all around us.

Their karmic success and karmic debt are stored in our collective consciousness, and when we activate the root chakra, it brings everything to the surface.

For instance, say your ancestors have all been narcissists, and no one before you has taken the time to activate their chakra system.

Before you became aware, you, too, were headed down the same path of narcissism.

This could be seen as one of your greatest life lessons to (hopefully) heal in this lifetime.

It is lessons like these that give the most grief during the healing process.

Regardless of what comes up for you, here are a few things to help make the activation process a little smoother:

Also, things like journaling, reiki healing, and even psychotherapy are great aids in the root chakra activation process.

The spiritual community often gets a bad rep. for disliking the medical community.

This could not be further from the truth.

As a technologically advanced society, modern advancements in science and therapy have helped humans in ways that the holistic community can’t deny.

Moderation is key in every facet of life and having a professional to talk to is perfectly healthy and encouraged!

As mentioned, the root chakra is likely to bring up a well of past trauma.

It’s important to take all the support you can get!

[…] it works closely with the Root chakra, allowing you to feel stable, grounded, and reassured in your […]