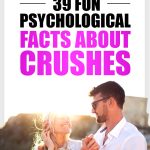 Having a crush is a part of being human. We have all been there!

We meet a person who we just can’t get out of our head. They give us butterflies, and we really want to get to know them better.

A crush is fun and exciting, and I want to talk about them today!

In this article, we will look at some little-known psychological facts about crushes.

What is a Crush?

So, what actually is a crush?

When we have a crush on someone, we tend to find ourselves super attracted to them. They give us butterflies and our heart skips a beat when thinking about them!

A crush is usually a short-term and intense feeling.

It normally comes before a relationship, and before we have a romantic connection with the person.

When we are crushing on someone, we simply cannot get them out of our head!

When we talk about crushes, we tend to think of them as a romantic and sexual attraction to someone.

According to psychologist Christie Kederian, we can also have platonic crushes. We may meet people that we just really want to be friends with.

This idea of a platonic crush is definitely not a new one.

You have probably heard of the term man-crush, which refers to an intense non-romantic admiration for someone.

So, psychologists do agree that man-crushes are real!

Most Crushes Last Around Four Months

When we start having a crush on someone, we tend to feel as if it will last forever!

We will be thinking about them all the time and always wondering where they are and what they are thinking of us.

But, did you know that crushes only usually last around four months? According to psychologists, four months is the time limit on crushes.

So, what happens after the four months?

Well, if you still have adoring feelings for the person you have been crushing on, you are probably in love!

Freud is probably cheering from the afterlife with this psychological fact about crushes.

You have probably heard that we tend to date people who look like our parents, and it's totally normal to feel pretty grossed out about this.

But, there have been studies that actually back this theory up.

A researcher at the University of St Andrews discovered that men will usually go for women who look like their mothers when looking for a partner.

He also found the same thing happens with women.

Of course, this isn’t because we want to be in a relationship with our parents.

It is all about familiarity!

When we date people who look familiar, we tend to feel safer and more secure around them.

Having a Crush Can Be Pretty Stressful

Do you remember your crush at school?

Perhaps you really fancied someone in your class and all your friends knew about it. So, they would always wind you up about it!

This was always pretty embarrassing, but did you know that the stress you felt wasn’t just because of your annoying friends?

When we are around someone that we have a crush on, we tend to get more nervous.

Attraction makes us feel stressed, and this means that our bodies will react to the stress in an anxious way.

Hearts racing, sweaty palms, and fidgeting are all signs of stress – and signs of having a crush!

Remember how I said that we were attracted to people that seemed familiar to us?

Well, we don’t just get crushes on people who look like our parents! In fact, you are more likely to develop a crush on someone who is like you.

We tend to be more attracted to people who have the same values and goals as us. The people we crush on will also often have similar personality traits to ourselves.

This is because we find comfort in familiarity. Plus, we like to see the best version of ourselves in our crush!

When You Have a Crush, You Tend To Believe They Are Perfect

Ah, the infamous rose-tinted glasses. Yup, they are definitely real!

When you have a crush on someone, you tend to believe that they are perfect in every way.

You won’t really see any bad traits in their personality and be completely enamored by them.

Someone will appear much more attractive to you when you have a crush on them, too.

When we have a crush on someone, there are chemicals in our brains at play.

Have you ever heard of oxytocin?

This is often referred to as the love hormone and makes us feel all warm and fuzzy inside. It is linked to childbirth, but is also connected to crushes!

According to a 2014 study, people at the initial stages of romantic attachment have higher levels of oxytocin in their system.

This does sound lovely. However, when there is less of this hormone circulating in your system, you can get really down.

It is kind of like withdrawing from a drug, with mood swings and sadness occurring.

So, next time you hear the phrase, ‘I am addicted to him’, know that there is a scientific reason for it!

We all like a nice smile, but did you know that smiling at people will make them develop a crush on you?

There have been studies done that back this up, too!

According to a 2012 study, people who look happier tend to be considered more attractive.

In the study, the researchers gave groups of pictures of people with varying levels of attractiveness and happiness.

They found that a happy facial expression can even make a relative ‘unattractive’ person appear more attractive.

When you are crushing on someone, you probably don’t really consider their body odor (unless it's, like, really bad).

But, did you know that smell actually has a big impact on who we find attractive?

Okay, we are not saying that a person's body odor will be the only thing you like about them. You are probably aware of their fun personality and beautiful looks!

However, there are underlying aspects of attraction that we are just not really aware of. The main one is body odor and smell.

Familiar deodorant and perfume make us more attracted to someone. Plus, when we are crushing on someone, we tend to actually like their own body odor!

In a fascinating 2005 study, researchers found that homosexual and heterosexual men respond differently to different scents.

This shows us that there is so much going on in our bodies and minds when we find someone attractive.

It is Hard To Lie To Your Crush

Because being around people we fancy makes us nervous, it is actually pretty hard to lie to your crush.

Kind of annoying when we are not wanting them to know that we like them!

When we are nervous, we tend to find telling lies even harder. We may even start blurting things out to our crush that we really didn’t want to!

Having a Crush on Someone You Work With Is Totally Normal

If you are working a usual 9-5 job, you spend a lot of time around your coworkers. They are probably the people you see most in your life.

So, it is pretty inevitable that feelings might grow.

In fact, a study by Totaljobs found that two-thirds of people would be open to dating a colleague.

But, why do we begin to fancy people at work?

Many psychologists think it's simply because we are around them a lot. This is called the mere exposure effect.

We tend to like things that we are familiar with, including people!

Of course, if you are crushing on a coworker, be wary about making a move. Workplace romances can notoriously get messy!

Love at First Sight is Real

We all have heard the romantic stories about people falling in love at first sight.

In a very adorable interview with Megan Markle and Prince Harry, he claimed that he knew she was the one that was right for him as soon as he met her.

But did you know that love at first sight is actually real?

This is all about chemicals in our brain and what happens when we meet someone.

According to psychologists, it takes a fifth of a second for chemicals of love to be released in our brains when we are looking at someone we like.

So, your crush might not be a crush! It may be the real deal.

When someone has a crush, it is pretty normal for them to begin to copy their crush's behavior. They may start to speak in a similar tone or start to say phrases that their crush does.

Studies have shown that this is actually a good thing, though!

When we copy someone we talk to, they tend to like us more. This is because they begin to connect with us and see themselves in our behavior.

In a 2009 study, researchers took a group of men out speed-dating.

Some of the women they were on dates with were asked to mimic their behavior, both verbally and non-verbally.

The study found that, when asked about who they were attracted to, the men preferred the women that mimicked them.

People In Relationships Can Develop Crushes

Remember how we talked about the mere exposure effect? This effect means that when we are around people a lot, we tend to develop crushes on them.

This means that people in relationships can develop crushes on people who are not their partners.

If you are in a relationship and have developed a crush on someone else, you may feel pretty bad about yourself!

Developing crushes is totally normal. It is what you do about it that matters.

Remember, crushes don’t last a long time, and they will probably not lead to love.

You can be totally happy and content with your partner and develop a crush, especially if you are around this person more than your partner.

It is important to acknowledge it and remember – it is all psychology and hormones!

You Can’t Control Who You Develop a Crush On

Because there are so many psychological factors involved when you develop a crush on someone, you really can’t control who you have a crush on.

Crushes just happen, and sometimes they come right out of the blue!

Sometimes you can embrace your crush, but other times you might need to try and ignore it.

However, ignoring your crush can be pretty difficult! In order to get over a crush, you need to be aware of it (and all the psychological reasons behind getting crushes).

Do you relate to any of these facts?

Are You Experiencing Any of These Psychological Facts About Crushes?

Having a crush is a part of being alive. We all get them, and sometimes true love can come from a simple crush!

It is really interesting how much our psyche and brain influence our crushes and behavior.

I know that I have experienced some of these psychological facts about crushes when I was younger!

Do you relate to any of these amazing facts about crushes and love?