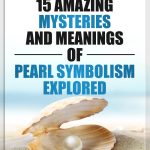 Pearls are one of the most well-known gems on the planet, and many of us are amazed at their puzzling silky beauty.

Yet, even though most know that pearls come from marine species like oysters, few are those that know about Pearl symbolism.

This article aims to explore this topic and answer the question: what do pearls symbolize?

First of all, let us clarify the distinction between pearls and gemstones, such as rubies, emeralds, and sapphires.

In fact, ancient civilizations made no distinction between the two, and pearls were thought to be gemstones for the longest time.

However, when looking at actual gemstones, they are now known to have a mineral origin, meaning that they were made from rock through contact with water.

The water wears the rock down, taking its minerals to deeper layers of the Earth’s surface.

Then, after dozens of thousand years of constant pressure and compression, the minerals assemble, and gemstones are made.

On the other hand, the story is very different for pearls, because they are made by living things.

It is believed that some species of oysters, clams, and mussels secrete a fluid when an irritant makes its way through their shells, as a means to cover and neutralize it.

As layers of that fluid accumulate over the years, their deposits stack on top of each other, eventually giving birth to a pearl.

Knowing the origin of pearls begs the question of the meaning and symbolism surrounding these beautiful gems.

This article begins by exploring the spiritual meaning of pearls.

One of the main symbolisms of pearls is purity. Their whiteness, spotlessness and homogeneous aspects further enhance the angelic purity that pearls evoke.

According to Greek mythology, pearls come from the birth of Aphrodite, the goddess of love and beauty.

Indeed, she was born from the ocean’s foam, and as she emerged, small droplets of water fell from her body and crystallized to become pearls.

In this very romantic myth, the purity of pearls is rooted in its origin from the birth of the Goddess of love and beauty.

As such, pearls symbolize divine purity and emanate a feeling of saintliness.

This is how they are believed to cleanse one’s aura from negative and unwanted energies and to make it glowy and clear.

Pearls are very often linked to the wisdom that is obtained through direct experience. This relates to the way that pearls are formed.

Indeed, mollusks and oysters produce pearls by protecting themselves from irritants across many different instances.

Through the experiences of a lifetime, a gem -or wisdom- is born.

As the world-renown filmmaker, Frederico Fellini, once put it, “All art is autobiographical, the pearl is the oyster’s autobiography.”

Our own lives are similar: it is our experiences, especially the most challenging ones, that create our inner wisdom, an intangible gem that only we have access to.

The white color of pearls, their gleam, and their radiance made Hindus believe that they can foster energy flow in the Crown Chakra, located at the scalp of the head.

As the 7th and highest of chakras, it is said to be connected to our spiritual or higher self. This chakra is what links us to the undying universe and all of its spiritual entities.

In fact, it represents a pure consciousness that is devoid of time and space, a glimpse into the infinite and eternal oneness found behind everything that is.

RELATED: Is Your Crown Chakra Opening? The 3 Key Symptoms

As pearls exacerbate the 7th chakra, it makes us more in touch with this aspect of us, which was long forgotten by many of us.

The pearl symbolism in the bible is also associated with eternal life, as it demonstrates the incommensurable value of the Kingdom of Heaven (Matthew 13:45-46, The Parable of the Pearl).

Pearls are used by some practitioners for their healing properties on the body.

Some experts on the matter believe that pearls can help balance hormones and bodily rhythms in concordance with the moon, to restore harmony between man and nature.

The effects that are often discussed are improvements in digestive functions, an increase in fertility and easier childbirth.

Moreover, the process through which pearls are made is tedious and slow. Yet, from a bigger frame, creatures like oysters turn irritants into a gem, just like we can shift our problems into opportunities to better ourselves.

This transformative process is the core of what healing is: taking the challenges that life throws at us and turning them into precious wisdom.

As such, pearls can reduce nervousness and anxiety, and help you dim a pessimistic inner voice in favour of a brighter one.

According to a few spiritual healers, wearing pearls is a means to foster our protection against negative energies from this world and beyond.

This is believed to happen by creating a stronger bridge between the spiritual and the material. It can help us reconnect to our spirit guides and guardian angels, whose goals are to protect us and enable us to reach the highest of our potential.

It is also helpful to remember that pearls are made by sea creatures in the process of protecting themselves.

This reminder is also useful to us, humans, since the most simple creatures can make a wonderous gem by protecting themselves.

Our complexity makes for stronger protection, and perhaps more beautiful jewels within ourselves at the end of the process.

Pearls are valued for their calming and soothing effects on the mind and the body.

This is likely linked to their spiritual meanings of healing and protection because they make the wearer of the pearl safe and at peace.

Moreover, pearls are homogeneous and clear, which reflects the untroubled mind of the bearer.

Given the unparalleled beauty of them, the symbolism of pearls is also linked to the feminine, including fertility, grace, elegance, and intuition.

In fact, many women, from actresses to politicians, now wear pearls as a means to further their drive to empower themselves, by using them to support their bold and confident appearance.

These gems are oftentimes offered as a sign of love and affection towards to receiver, and it is not a coincidence.

Indeed, you can link this symbolism to the Greek myth narrating the origin of pearls as coming from the birth of Aphrodite, the Goddess of love.

The affective meaning of pearls also reflects the beauty of the one who receives them, and it can be seen as a eulogy of his/her esthetic appreciation.

The affection that is testified by the pearl is also pure and uncontaminated, thus making its affectionate meaning even more enchanting.

Thanks to the pearl’s apparent pureness, another meaning that is linked to this gem is the one of integrity.

In fact, pearls also symbolize truth and genuineness, and they give the bearer the appearance of a good, honest person.

This meaning might be a byproduct of the purity that is attached to the pearl’s symbolism, although the pearl has oftentimes been equated to representing virtues of all kinds.

In ancient civilizations, like the Romans, wearing a pearl was a sign of significant riches and status. But since rarety creates value, pearls lost their value because of the number of cultured pearls being sold on the market.

Still, having a natural pearl retains its symbol of wealth and riches, because of how rare it is.

According to Feng Shui traditions, pearls are said to be bearers of good luck and fortune, while protecting you from bad karma.

Nevertheless, some people advise to acquire your own pearl instead of getting it as a gift, since pearls absorb a lot of the energy that surrounds it.

Yet, the purity of the pearl is seen as a magnet for goodness and for prosperity, hence the symbolism of good luck attached to it.

Meaning of Pearls by Color

The black pearl has a variety of symbolisms attached to it.

Some argue that it represents healing and a promise of love for the broken-hearted, while others believe that they protect from bad energy by sucking it up, thus giving it its black color.

These pearls are extremely rare. One myth recounts that Adam and Eve shed tears that formed a lake of pearls.

While Eve’s tears made white pearls, Adam’s tears produced black ones. Since men’s tears were thought to be more rare than women’s, it explained how rare black pearls were.

White pearls have most of the meanings described above, such as wisdom, purity and innocence, feminine energy, and connection to the divine.

They are not as rare as black ones, yet they remain quite valuable since their ageless nature makes sure that they would stand the passage of time.

The golden pearls have a set of meanings that are mostly attached to wealth and riches, success and prosperity, and sophistication.

This is mainly due to the gold color that inspires nobility and royalty.

However, many golden pearls are now cultured by putting oysters in artificial environments. In this sense, they have less value than the natural pearls.

When pearls have a blue, and sometimes greyish color, their meaning is mostly centered around sincerity, truth, peacefulness, self-confidence, and intuitive abilities.

This type of pearl is perfect for anybody that feels like they need courage in their lives, and that are trying to reconnect with their true self in a calm and genuine manner.

Pearls are the oldest gem to be used by humans, which makes for a very rich symbolism across many different traditions and customs.

We can be inspired both by the myths recounting the emergence of pearls, but also by the true process through which they are made.

Indeed, sea creatures have a lot to teach us, especially about turning problems into an opportunity to make jewels of infinite wisdom and beauty.

In this sense, pearls are truly unparalleled gems.

Thank you, if you enjoyed this article, check out these quotes about pearls. I'm sure you'll enjoy reading them!

[…] the symbolism of the pearls is very rich and varied, I invite you to have a look at the following 103 pearl […]