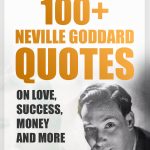 Neville Lancelot Goddard was a 20th-century American writer known for his works on the Bible, spirituality, self-help, self-reflection, consciousness, the power of imagination, and other related topics.

He delivered several lectures and authored a number of books on the aforementioned themes and subjects during his lifetime.

Some of his greatest books are:

In this guide, we have collected over 100 of Neville Goddard’s quotes on life, spirituality, consciousness, goals, success, mindfulness, and imagination.

Read on to discover these popular quotes full of wisdom that will give you some insights into Goddard’s mind as well as new perspectives on life.

1. “An awakened imagination works with a purpose. It creates and conserves the desirable and transforms or destroys the undesirable.”

2. “Nothing comes from without; all things come from within – from the subconscious.”

3. “If a man looks upon any other man and estimates that man as less than himself, then he is stealing from the other. He is stealing the other's birthright – that of equality.”

4. “Man moves in a world that is nothing more or less than his consciousness objectified.”

5. “Imagination and faith are the secrets of creation.”

6. “To reach a higher level of being, you must assume a higher concept of yourself.”

7. “You are already that which you want to be, and your refusal to believe it is the only reason you do not see it.”

8. “If you will assume your desire and live there as though it were true, no power on earth can stop it from becoming a fact.”

9. “Each person is born with an infinite power, against which no earthly force is of the slightest significance.”

10. “Assume the feeling of your wish fulfilled and observe the route that your attention follows.”

12. “Do not try to change people; they are only messengers telling you who you are. Revalue yourself and they will confirm the change.”

13. “Your opinion of yourself is your most important viewpoint. You are infinitely greater than you think you are.”

14. “The world is yourself pushed out. Ask yourself what you want and then give it to yourself! Do not question how it will come about; just go your way knowing that the evidence of what you have done must appear, and it will.”

16. “Whenever your feeling is in conflict with your wish, feeling will be the victor.”

17. “The circumstances of your life reflect what you have been saying.”

18. “Everyone is free to create his world as he wants it if he knows that the whole thing is responding to him.”

19. “Everything depends upon our attitude towards ourselves. That which we will not affirm as true of ourselves cannot develop in our life.”

20. “The world is a mirror, forever reflecting what you are doing, within yourself.”

23. “Learn to shake yourself loose from what the world believes is the only reality.”

24. “It is imagination which makes one a leader while the lack of it makes one a follower.”

25. “Simply dare to assume you are what you want to be and you will compel everyone to play their part.”

26. “There is nothing God cannot do! Do not think that one who is fabulously rich has an influx of spirit which differs from yours. He is imagining wealth, either wittingly or unwittingly; but you can do it knowingly.”

27. “Predetermine what you want to hear and listen until you hear it.”

29. “Prayer is the art of assuming the feeling of being and having that which you want.”

30. “Through your ability to think and feel, you have dominion over all creation.”

31. “Take your attention away from your problem and the multitude of reasons why you cannot achieve your ideal. Concentrate your attention entirely upon the thing desired.”

32. “The beliefs in the potency of drugs to heal, diets to strengthen, moneys to secure, are the values or money changers that must be thrown.”

33. “Man’s chief delusion is his conviction that there are causes other than his own state of consciousness.”

34. “Be careful of your moods and feelings, for there is an unbroken connection between your feelings and your visible world.”

36. “Imagination is nothing more than sensory states. Learn to go beyond an idea by feeling its reality.”

37. “The spiritual man speaks to the natural man through the language of desire.”

38. “Your body is an emotional filter and bears the unmistakable marks of your prevalent emotions.”

39. “Consciousness follows vision, and I step into the vision and explore a world just as real as this.”

40. “The conditions and events of your life are your children formed from the molds of your subconscious impressions in sleep.”

41. “Tell no man of your spiritual romance. Lock your secret within you in joy, confident and happy that someday you will bear the son of your lover by expressing and possessing the nature of your impression.”

42. “The world was constructed in the mind's eye, out of things unseen by the mortal eye, and made alive by faith.”

43. “No man can lift you to the level you desire. The power to ascend is within yourself; it is your consciousness.”

44. “Only as one is willing to give up his present limitations and identity can he become that which he desires to be.”

45. “The great secret is a controlled imagination and a well-sustained attention, firmly and repeatedly focused on the object to be accomplished.”

47. “Whatever you desire, believe that you have received it, and you will.”

50. “Your reactions, whether positive or negative, are creative of future circumstances. In your imagination, you can hear words congratulating you on getting a wonderful new job. That imaginal act now goes forward and you will encounter this pleasant experience in the future.”

51. “Man’s responsibility, then, is to choose his destination; the motive power to bring him there is furnished by the Infinite.”

52. “Change your conception of yourself and you will automatically change the world in which you live.”

53. “Live your life in a sublime spirit of confidence and determination; disregard appearances, conditions, in fact all evidence of your senses that deny the fulfillment of your desire. Rest in the assumption that you are already what you want to be.”

55. “Actually, you are destined to reach the point where you realise that through your own desire you can consciously create your successive destinies.”

56. “The numberless unrealized hopes and ambitions of man are the seeds which are buried within the consciousness or virgin womb of man.”

57. “If you want to change yourself, become indifferent to things you cannot change – other peoples’ opinions and events clearly outside of your control – and focus inwardly. How you treat other people is no different than how you treat your own thoughts.”

58. “Therefore, when you know what you want, you must deliberately focus your attention on the feeling of your wish fulfilled until that feeling fills the mind and crowds all other ideas out of consciousness.”

59. “Prayers to be successful must be claimed and appropriated. Assume the positive consciousness of the thing desired.”

60. “Nothing comes from without. All things come from within.”

61. “When you attain the control of the internal direction of your attention, you will no longer stand in shallow water but will launch out into the deep of life.”

64. “A change of circumstance happens as a result of a change in your state of consciousness.”

65. “There is no limit to your creative power.”

66. “Command any idea to clothe itself in form.”

68. “You must assume the feeling of the wish fulfilled until your assumption has all the sensory vividness of reality.”

69. “How successful you are on the outside is directly related to how relaxed you feel inside. Your emotional sense of well-being dictates your life.”

70. “Somewhere within this realm of imagination there is a mood, a feeling of the wish fulfilled which, if appropriated, means success to you.”

71. “To the unenlightened man this will seem to be all fantasy, yet all progress comes from those who do not take the accepted view, nor accept the world as it is.”

72. “All is yours. Do not go seeking for that which you are. Appropriate it, claim it, assume it. Everything depends upon your concept of yourself. That which you do not claim as true of yourself cannot be realised by you.”

74. “Those who go seeking for love only make manifest their own lovelessness and the loveless never find love. Only the loving find love and they never have to seek for it.”

75. “Love is our birth right. Love is the fundamental necessity of our life. Do not go seeking for that which you are.”

76. “If one imagines unlovely things for another, they are going to produce them – not in the other, but in themselves.”

❤️ Related: 110 Soulmate Quotes (With Images) That Will Open Up Your Heart

78. “Don’t condemn yourself for the state into which you have fallen. If you don’t like it, move into another.”

79. “Do not waste one moment in regret, for to think feelingly of the mistakes of the past is to re-infect yourself.”

80. “Never go to sleep feeling discouraged or dissatisfied. Never sleep in the consciousness of failure.”

81. “The individual’s inner speech and actions attract the conditions of his life.”

83. “The undisciplined man’s attention is the servant of his vision rather than its master. It is captured by the pressing rather than the important.”

84. “Determined imagination is the beginning of all successful operation. The imagination, alone, is the means of fulfilling the intention.”

85. “You believe in God? Believe also in your imagination.”

86. “Sleep conceals the creative act while the objective world reveals it. In sleep man impresses the subconscious with his conception of himself.”

87. “Use your imagination lovingly on behalf of another.”

88. “Imagination is seeing with the eye of God”

90. “To rise in consciousness to the level of the thing desired and to remain there until such level becomes your nature is the way of all seeming miracles.”

91. “Imagination is the only redemptive power in the universe.”

92. “All that meditation amounts to is a controlled imagination and a well sustained attention. Simply hold the attention on a certain idea until it fills the mind and crowds all other ideas out of consciousness. The power of attention shows itself the sure guarantee of an inner force.”

93. “What we must work for is not the development of the will, but the education of the imagination and the steadying of attention.”

98. “To be conscious of being poor while praying for riches is to be rewarded with that which you are conscious of being, namely, poverty. Prayers to be successful must be claimed and appropriated. Assume the positive consciousness of the thing desired.”

99. “I have a lavish, steady, dependable income, consistent with integrity and mutual benefit.”

100. “Life does not care whether you call yourself rich or poor; strong or weak. It will eternally reward you with that which you claim as true of yourself.”

What Was Your Favourite Neville Goddard Quote?

Here, I’ve collected and presented over 100 of Neville Goddard’s quotes on various aspects of life and reality.

I hope these timeless quotes offer a new perspective on life and consciousness and will remain relevant in any age due to the wisdom they impart.

Which Neville Goddard quote did you like the most?

Let us know in the comments, as it would be cool to see what quotes resonate most with people.

Thank you for reading!