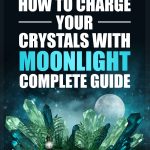 Crystals are fantastic spiritual tools that can have real positive effects on our lives.

There are loads of different crystals out there, and each has a range of healing abilities for the mind, body, and soul.

Crystals heal us because of the energy that they omit, and they all have the ability to absorb and hold energy.

This means that it is really important to charge our crystals, which refers to using the energy in the universe to enhance the powers of our crystals.

By charging our crystals, we can remove any negative energy that it is holding onto and fill them with powerful energy from the universe.

In this article, I will look at how to charge your crystals with moonlight.

Moonlight is one of the best ways of charging crystals, as the moon is an intensely spiritual celestial object that has huge powers over the earth.

How To Charge Crystals In Moonlight?

Let’s go through all the steps for charging crystals in the moonlight, so your crystals are ready to use!

Before the night falls, collect the crystals that you are needing to charge.

If you have a lot of crystals, you may want to space out the charging process over a few nights in order for all crystals to have a decent chance of charging.

Before taking them outside, you may wish to run them underwater.

This is a good way to start the process as it gives the stones a little cleanse and washes off any dust and debris that may be on them.

Prepping is super important when it comes to charging crystals, especially if we are charging them outside!

Have a think about where the best place may be in order to charge your crystals in moonlight.

It is preferable to charge them outside, on grass or the ground.

This allows the crystals to properly soak up the energies of the natural world.

Do you have a garden or yard where you can safely charge your stones?

If you don’t, you can also charge the crystals on your windowsill!

As long as they are somewhere where the energy of the moon can find them, it doesn’t matter too much.

You may wish to cleanse the surroundings before charging your crystals.

Sage and palo santo are great spiritual tools that allow you to purify the space around you, making the area perfect for crystal charging.

When you have prepared your surroundings, it is time to arrange your crystals in order for them to be charged.

Now, it is super important to be mindful of how you are arranging your crystals.

Some people like to use a crystal grid when charging their stones, setting the crystals out in a certain pattern.

You may also wish to consider the cardinal directions and how they are linked to the elements.

You can harness the elements by placing the crystals in the correct positions.

When charging crystals in moonlight, you may wish to set intentions.

This links your energy with the crystals, allowing a flow of energies and ideas throughout the universe. The more you put into your crystals, the more charge they will receive from the moon.

What would you like the crystals to help you with over the next few months?

Are there things you are struggling with?

You may have a specific thing in mind, such as an upcoming job interview.

However, you may simply wish to thank the crystals for their support and ask for more guidance.

When setting your intentions, hold a crystal in your hand and close your eyes.

Inhale and exhale deeply, using your breath to center yourself.

Then, visualize the energy that is flowing between you and the crystal.

You may wish to picture this energy as a beam of light.

When you are centered and linked to the crystal, repeat your intentions out loud or in your head.

Repeat your intentions until you feel ready to stop.

Step 5: Leave Your Crystals Out Overnight

After arranging your crystals and setting any intentions you wish to make, leave the crystals out in the moonlight all night.

You may wish to collect your crystals at dawn, in order to protect them from the sunlight.

This is because some crystals can get damaged in the sunlight.

However, you can leave your crystals to get some charging from the sun, too!

This all depends on the crystals you have.

Take your crystals back to their spot in your home.

You may wish to spend a moment or two meditating with the charged crystals, feeling their energy.

Charging Crystals On A Full Moon

You can charge your crystals with moonlight any night of the month.

However, a lot of spiritualists like to charge their crystals on a full moon.

This is because the powers of the moon are much more potent when it is full.

A full moon allows your crystals to receive the most amount of energy and light.

Charging crystals on a full moon also means that you can get into the routine of cleansing and charging your crystals every month. This allows you to keep their energy protected and powerful.

You may also wish to look into the different phases of the moon and how they link to intentions.

For example, a waning moon is the best time to set intentions of letting go and moving forward.

You can incorporate this into your charging rituals throughout the month.

Why Charge Crystals In Moonlight?

Moonlight is one of the best ways to charge your crystals, and this is because of the spiritual power of the moon.

The moon has long been pertinent in spirituality, with many people using it for magic and guidance.

It has always had an amazing relationship with humans, featuring in spirituality and religions all around the world.

The moon contains powerful energies, and we can harness these energies by using the moonlight to charge our crystals.

What Are The Best Crystals To Charge In Moonlight?

Because every crystal has its own unique set of qualities, some charge better in the moonlight than others.

There are a variety of ways you can charge your crystals, such as using sunlight or natural running water.

It is good to think about the powers of the crystals you have and their associations before choosing how to charge them.

Both rose and clear quartz crystals can be charged well by the moon, as these stones have energy that can link with the moonlight.

As you can imagine, moonstone is a crystal that should be charged in the moonlight.

It gets its name because of its pearly white color and emits a stunning glow under certain lights.

It isn’t just the white moonstone that can be charged under the moonlight either, black or peach moonstones gain a lot by being charged that way.

Protective crystals, such as black tourmaline, should be charged by the moonlight, preferably the full moon.

This is because they soak up negative energy over time, and the moon has the best powers to cleanse and charge these stones.

Labradorite also does well when charged by the moonlight.

Its magical qualities link to the moon’s own magic, enhancing its own powers.

Which Crystals Cannot Be Charged In Moonlight?

Of course, the moonlight is a great way of charging crystals, but there are some things to consider when picking which stones you wish to charge this way.

If you are charging your crystals in the moonlight outside, you must consider the hardiness of the stones.

Certain stones can be affected by the weather and water, so if you live in a place that might rain, you may want to keep them inside.

Crystals that are soft and could be affected by weather include selenite and lepidolite.

If you are considering charging your stones outside, definitely research each stone to make sure they are hardy enough to survive the weather!

Other than the weather worry, most crystals can be charged by the moonlight.

This is because of the moon’s gentle energy that connects with the stones.

RELATED: When It Rains, It Pours: The Surprising Symbolism Of Rain

Let’s look at some questions you might have about charging crystals in the moonlight.

How Long To Charge Crystals In Moonlight?

You should charge your crystals by the moonlight for at least 6 hours, but longer is better.

However, this depends on how long your night is!

You may wish to leave your crystals out overnight and then during the day for a whole 24 hours, allowing them to be charged by both the moonlight and the sun.

However, if you choose to leave your crystals out for 24 hours, make sure you know what crystals cannot be charged under the sun.

Because of the brightness of the sun, certain crystals can fade and be damaged under the light.

These crystals include amethyst, aventurine, and fluorite.

Do Crystals Have To Be In Direct Moonlight To Charge?

It is preferable to leave your crystals out under direct moonlight, but it doesn’t matter if you can’t!

Of course, we cannot help clouds and artificial light, but they actually don’t interfere with the charging of the crystals too much.

The moon's energy is still there in the world, regardless of clouds.

This means that crystals do not need to be in direct moonlight to charge, as they still can connect with the powers of the moon.

Can You Charge Crystals Without a Full Moon?

A lot of spiritualists choose to charge their crystals under the full moon, as this is when its powers are most potent.

However, you can charge crystals at any time of the moon’s cycle.

It can be helpful to look at the moon's cycle and how it can impact our energy and intentions.

A waxing moon is a perfect time to set intentions of fresh starts and new beginnings.

You may wish to charge your crystals under the waxing moon if you are wishing to use them this way.

Can All Crystals Be Charged In Moonlight?

All crystals can be charged in the moonlight.

However, if you are placing the stones outside, you should be aware that some crystals can get damaged by the weather, especially rain.

Softer stones, such as selenite, can be harmed by water and therefore should not be left outside if it might rain.

Harness The Power of the Moon With Your Crystals

I hope you have enjoyed this guide on how to charge crystals in the moonlight!

The moon is a powerful, beautiful, spiritual object, and we can gain so much from it.

I think that moonlight is the best way to charge crystals, as we can leave the stones out overnight to soak up the powers of the moon.

Connect with nature and the moon's powers, bringing forth abundance and energy into your life!

[…] you don't want your stone to be exposed to the sun, place it in the moonlight or even put it out in the rain for a […]