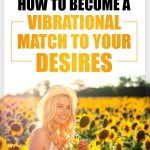 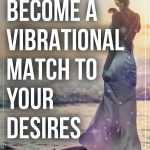 One of the biggest challenges I face when manifesting is getting in alignment with my desire. Without being able to do that I know I won't be able to manifest what it is that I intend to.

So if you're wondering how do you become a vibrational match to your desire, here's how:

I hope you're ready, let's go!

Belief: The First Step To Becoming A Vibrational Match To Your Desire

You need to truly believe what you want is actually possible for you. It's no good in wanting to manifest something but at the same time not believing it's possible for you to do.

Also, you need to make sure you don't have a counterproductive and self-sabotaging belief that will stop you from becoming a vibrational match to what you desire.

The first thing you need to do is some personal inventory.

This may take a little time, sometimes it's an ongoing process, but you need to discover what your current beliefs are.

The first thing to do is look at your current situation in life.

Let's use manifesting money as an example. I like to use this example as it's a common topic most people have issues with.

If you find that you can't hold on to money for 5 mins without spending it, you probably have subconscious money issues.

If you start making a good amount of money then you self destruct and do everything you can to mess it all up and lose it all. You probably have self-sabotaging money beliefs.

If you can't talk to people about money or it makes you feel uncomfortable then you probably have counterproductive money beliefs.

So Where Do Limiting Beliefs Come From?

Most people get their beliefs when they were a child growing up.

Usually well-meaning friends and family told us things that they believe were true but we're actually self-limiting and untrue.

You may have been told certain things about money which you've forgotten about, but they're still there in the back of your mind unconsciously dictating your thoughts and behaviors around money.

Staying on the money example, here are some things you may have been told as a child,

“I'd rather be happy than rich.”

“Money is the root of all evil.”

As you can see, they are not positive beliefs about money. Especially if you want to manifest more.

Most of the time we're not even conscious of these beliefs.

The good news is, you can change any negative beliefs into positive beliefs.

I've a got a couple of simple yet amazingly powerful exercises you can do discover and change old limiting beliefs you may have.

After you do these exercises you'll start to become a vibrational match with your desire.

Let's start with the first technique.

This process is simple but you must commit to doing it daily.

It works by choosing to look out for limiting beliefs, thoughts, and behaviors.

Once you discover what your unconscious beliefs are, THEY STOP BECOMING UNCONSCIOUS! That's because you’re now CONSCIOUS of them.

You simply need to change them.

How this works is, firstly you need to decide what kind of thoughts and behaviors you need in order to be aligned with your desired outcome.

For example, if you want to be wealthy, you might decide that these are the type of beliefs you need.

You also might decide someone who is wealthy would behave and feel in these ways.

After doing this it's good to run through any thoughts and behaviors that are the opposite to what you want.

This helps you pay attention to those thoughts and behaviors as you go through your day.

This takes us onto the next part of the belief building process to become a vibrational match to your desire.

Now you know, what thoughts, beliefs, and behaviors you need to get into a vibrational match.

You need to do this every morning.

Now as you go through your day you'll start to catch yourself thinking self-limiting thoughts, and doing things that you know are out of alignment with the beliefs and actions you need to become a match to your desire.

When you catch yourself thinking something self-limiting you then need to acknowledge the thought and then question it for what it is and then change it.

This is a key part of building new beliefs and new behaviors which will, in turn, strengthen your new beliefs.

You need to STOP RIGHT THERE, and then question it, say to yourself, is that thought a true fact?

You'll probably then realize it isn't, then you need to think a thought more in line with what you want to be a vibrational match to.

Doing this day in and day out will help catch yourself in these moments where you usually say these self-limiting thoughts and beliefs without realizing it.

And because you've dispelled them by affirming new statements and beliefs that are in alignment with what you desire you'll start to believe those new thoughts.

It works the same with actions.

For example. if you want a successful business.

Next time you catch yourself doing something like deciding to watch TV instead of working on your new business idea. Stop at that moment and say something like,

“I am committed to growing my business and I choose to work on that instead.”

Then go work on your business.

This WILL feel unnatural, but you MUST DO IT!

There's a saying that goes… “Neurons that fire together, wire together”

But stopping doing a usual behavior and doing something new, you are wiring your brain to behave in a new way which is in alignment with what you want.

Your old neural pathways will prune away because they're not being fired together and the new pathways will strengthen and eventually become the new unconscious behaviors.

Effectively you would have created new empowering subconscious beliefs and behaviors.

The act of behaving in a way that will help you produce wealth will increase your belief in your ability to manifest wealth.

Feeling: The Second Step To Matching The Vibration Of Your Desires

The next step for becoming a vibrational match to your desire is how you feel when you think about what it is you're trying to manifest.

If you feel the opposite of what you want to manifest, then you will not be a vibrational match to it.

Let me show you a technique that will help you feel the desire you want without resistance.

So most of the time, we don't “feel” like what it is we want to manifest.

Just for simplicity, we'll stay on the money topic.

If you visualize having money and say affirmations like,

“I have all the money I need”

“I am a millionaire”

Then at the same time, you feel like a broke person and that you're lying to yourself, then you're doing visualizations and affirmations in vain.

I have a trick that I got from Jerry and Ester Hicks Abraham teachings. This book they did on money and the law of attraction is great.

That is playing the what if game.

To play this simple game, you need to take the time and relax your mind and body. Just take 5 mins and really relax.

Once you've become relaxed it's time to play.

So all you need to do is say what you do “if” and then state the desire you want. For example,

“What if I actually did manage to buy that car I wanted, how would that feel?”

“If I was a millionaire, what would I do?

What you're doing is allowing your mind to experience these thoughts and feeling without resistance because you're not having limiting beliefs get in the way.

Because you're only saying “if” you had this or that then you are just thinking what you would do “if” that was the situation.

You're not saying it as a fact,

RELATED: How to Attract Money Using Law of Attraction

The reason this game is so powerful is that you have felt those good feelings of the what “if” game, and at the same time, you are matching the vibrational essence of that desire.

When every day you feel like what it is you want then you bring your manifestation to you like a powerful magnet.

These processes will work for any desire you want to get into vibration alignment with.

Try it out and you'll see for yourself.

Summarizing Becoming A Vibrational Match To Your Desire

So there you go, you now know how to get into a vibrational match, but you must put in the little bit of work required.

The key thing you must do is create a strong belief that what you want can be achieved by you, and secondly, you must feel what it's like to be, do or achieve what it is you want.

The what if game is the perfect way to experience those feelings daily without resistance.

I hope you found this article helpful and feel free to leave a comment below and let me know your experience with the processes above. Speak soon!

Thanks ever so much Allan.Im a newbie so this helped a lot..🙏👍💙

Thank you so much for sharing this. I've heard that you need to become a vibrational match with your desires so many times without a clear explanation. After reading this, it is so clear to me now. Many blessings to you!

Your Blogs are really very interesting , Thanks a lot for sharing . I have a doubt , From the day i started manifesting i was seeing a lot signs like angel numbers and increased synchronicities and other staff , the things i asked the universe is something which i need in my life after 5 years so i asked universe to show it at that time , but from past 1 week I am not seeing that much signs except few 1111 numbers and few incidents and because of that i am feeling bit hopeless and feeling that law of attraction doesn’t exist , what does it mean ? Am I on the wrong path or Is my manifestion already aligned in my life so i am not getting the signs anymore ? I have an another doubt will law of attraction only for the things we ask and the things which we can do or it will work for the things which we ask which is not possible by us like i mean for example - I want to study in Stanford University , This can be done by me so law of attractions works , it will only give me the opportunities to make a good application right ? so what abt this example like if i want a soulmate and he should be very rich in terms of money and in heart and at this time i need to get him , so in this example i know i deserve this but i cannot make this happen only universe as the power to do this , will these types desires work and come true ? Alan I need you reply for above questions please do answer . Let everyone get what they want !! Happy manifesting !! Waiting for your response !

Thank you very much Alan!

Thanks so much Alan, this is exactly what I need.More grease to your elbow