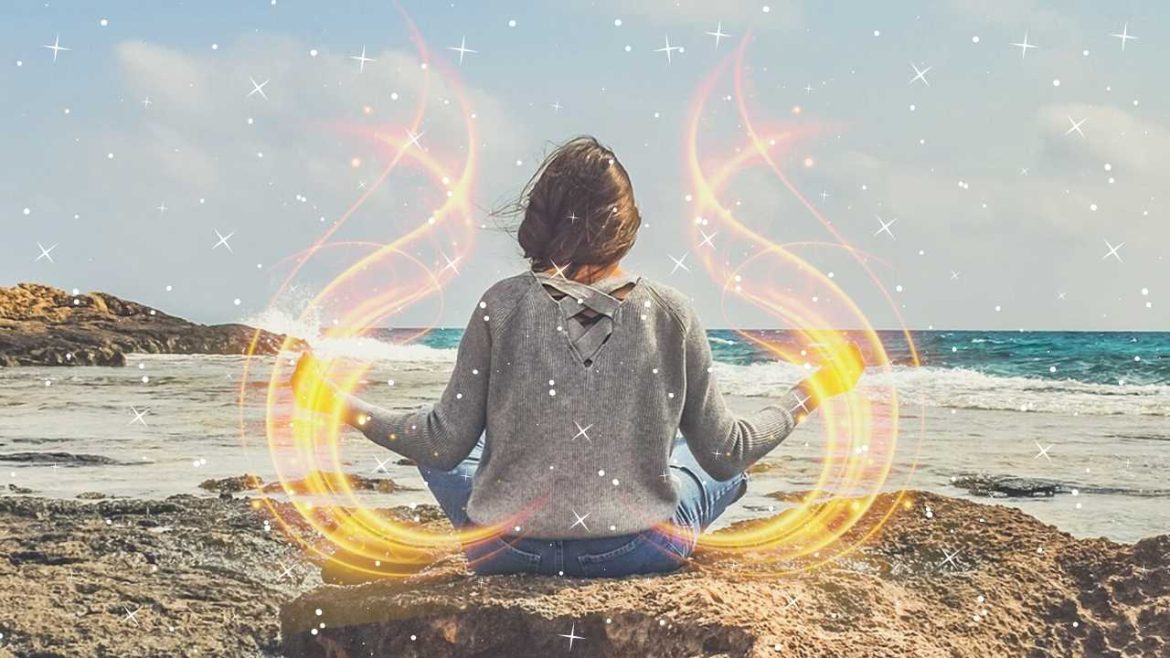 Every being on the planet has an aura—plants, animals, and humans alike.

Whether it’s a gold aura, or any other color, auras are always emanating from physical bodies and only become manifest in the ethereal plane.

For humans, auras differ in size and colors, and both depend on who we are as individuals.

People’s aura reflects their most authentic selves, who they are when nobody else is watching.

In fact, the color of our aura is one of our most revealing constituents.

It can tell you about the story and personality of someone without sharing a word with them. Auras talk, just not with words.

However, auras do tend to change over a lifetime.

It does not remain constant, and it is never pre-determined by our past experiences and genetics.

As such, our daily moods won’t dictate the tint of it, but the emotional patterns ingrained in us certainly will.

With all this being said, this article will focus on one of the most beautiful and admirable colors that an aura can display: the Gold aura.

Before getting into its detailed description, a brief explanation of auras is called for.

So, let us first answer the question, what exactly is an aura?

What is an Aura?

Answering this question is by no means an easy task because of the delicate nature of the topic.

But let’s keep things as simple as possible and start depicting what an aura is.

As described before, auras emanate from physical bodies and only reveal themselves in the spiritual realm.

As they radiate outwards and are larger than our flesh and bones, they form an elliptical shape, like an egg surrounding our bodies.

This description might be helpful for you to visualize it in your mind’s eye, but the truth is that you can’t really see them.

Auras are intangible, and only a few people can manage to grasp their sight.

This ability can certainly be trained, while others are born with the natural psychic capacities that allow them to perceive more than what our eyes can commonly offer.

However, seeing auras is not the only way to perceive them.

Feeling auras is an ability familiar to us all, though some are better at it than others -especially if their mind is clear and serene.

This happens much more often than you might think.

Pause for a second and think of a memory in which you had a strong impression about someone before even talking with them.

Maybe you sensed kindness and sympathy, or perhaps you became alert and wary of that person.

If you can recall such an instance, ensure that you instinctively read their aura and gather relevant input from it.

A distinctive characteristic that auras have comes down to their colors.

In fact, an aura’s color is its most descriptive and informative feature, as each color is bound to specific personality traits.

As suggested beforehand, the color of an aura is determined by various deep-rooted aspects of an individual’s psyche, emotions, and behaviors.

These facets are long-lasting and occur in frequent cycles, so unique and single occurrences won’t impact its shade potently.

As such, an aura’s color mirrors a person’s predominant patterns of feeling, thinking, and behaving.

You can learn so much about someone just by understating the color of their auras.

For instance, a peaceful, intelligent, and calm person might exude a soothing blue aura, whereas a loving, caring, and an empathetic individual would emanate a tender green aura.

All in all, auras are the intangible extensions of our physical bodies, and their colors reflect our most prevalent inner and outer experiences.

With this understanding in mind, it is time to dive in and grasp the primary gold aura meanings.

7 Meanings Of The Gold Aura

People with Gold auras are highly valued as individuals.

This is because the Golden color is the closest to spiritual illumination, and it really is a symbol of substantial inner wealth.

In fact, people with Gold auras have become aware of their shadows and fought a long war against them.

Eventually, their victory is reflected in the color of their aura, which highlights the level of transcendent insight that they attained.

People with a Gold aura seem to be naturally happy and glad to be alive.

Their vital energy is overwhelming and awe-inspiring, and people are automatically drawn to them.

Thanks to their acute spiritual insights, they also attract wounded individuals in need of guidance and advice.

Their positivity is strongly contagious, and they can truly shift the perspective of those drowning in negative ruminations and emotions.

Having a Golden aura is a testimony of the life experiences you’ve been through.

These experiences were also assimilated and turned into wisdom and sagacity.

Thus, people with Gold auras have been through a lot, good and bad, and managed to develop a solid and sound understanding of life, people, and themselves.

This allows them to mature their discernment and judiciousness, making for excellent advisers.

Gold auras reflect the diversity of life events experienced and the wisdom gained from it.

People with such an aura tint managed to overcome their intrinsic limits and live a liberated life.

Because of the previous hardships they went through, such individuals highly understand the challenges on the path to enlightenment.

As such, they maintain a humble attitude and do not feed their egos with unnecessary self-praise.

If you’re looking for a very good friend, someone with a Gold aura would be the best option.

Their selflessness makes them highly reliable and generous since they never seek and promote their self-interests over yours.

As highly compassionate beings, such individuals would do everything in their power to empathize with you to offer their genuine encouragement and unconditional affection.

Because of their wisdom, individuals surrounded by a Golden aura know that discipline is the means to continue improving and reach their goals.

It also allows them to stay grounded in their selfless attitude and makes space for their strong desire to help others in need while keeping their own lives in check.

In the workplace, people with Gold auras are not excessively ambitious.

Their humility is their strength since they never lose sight of their main goals and objectives.

As such, these individuals tend to excel in their work and studies because they are willing to learn, follow instructions if necessary, and put effort into their craft.

What Does The Gold Aura Mean Spiritually: The Role of Chakras

The Gold aura has been related to ascended spiritual masters who reached the state of purity so often described by a diversity of prophets and enlightened beings.

Oftentimes, such a color would be represented in paintings around the head region as a halo associated with divinity and a connection to higher planes of existence.

Chakras are very relevant when talking about aura colors because the predominant chakra also plays a role in coloring auras since they shine the brightest.

As such, the Gold aura is related to the Solar Plexus chakra, which is the third starting from the bottom.

It is a vital chakra, believed to be the source of vitality and purposeful action.

The Solar Plexus chakra shines the brightest when a person develops true confidence, gains wisdom, and touches upon their personal power.

It is the center of transformative energy for oneself and others.

This explains the Gold aura’s relationship to enlightenment and spiritual illumination since the ability to transform is one of its prerequisites.

People with a Gold aura can transmute negative into positive and turn nothing into everything.

This paves the way for unique creations and meaningful life.

One who has unlocked the potential of the Solar Plexus has managed to overcome the limitations of the ego through their strong will and profound accumulated knowledge.

This gives them a radiant glow of self-awareness that gets very close to divine perceptions.

In summary, Gold auras are expressions of an active and flowing Solar Plexus chakra, which reflects deep knowledge, successful shadow work, and transformative power for self and others.

The Gold aura is associated with highly valuable and desirable qualities, and people with such an aura can really appear to be the perfect person you have ever come across.

This impression mainly arises because of how gentle and kind they are.

Yet, this is balanced with some high and realistic self-esteem, a seemingly infinite amount of energy, and a positive attitude that cannot be disturbed.

People with Gold auras aren’t necessarily on the top of the social chain, as in having high status and tremendous jobs.

They can be very humble people, but with wisdom and understanding equal to no other.

They also make for the best friends and lovers.

Their generous, selfless nature wants to offer without expecting in return, and they seem to give limitlessly, without hesitation, and with remarkable intensity.

Still, they are not as perfect as they seem.

That’s not to say that they manage the impression they give off to people, but that they are thoroughly aware of their own flaws and misbehaviors.

They have integrated themselves into a coherent whole, and they do not shy away from admitting their mistakes.

As such, they are also outstanding learners and listeners, and working with them is very enjoyable for all.

At last, they are the most genuine people you can meet.

They will tell you what they think, but it won’t offend you since they often touch upon the truth of things.

They are excellent advisors, and following their counsel will undoubtedly help you resolve your problems.

All in all, people with Gold auras are real, positive, kind, and supportive.

They are wonderful people with bright personalities, and even though they have their own shortfalls, they work hard to admit them and improve themselves for the better.

The Gold aura is amongst the most impressive aura colors.

People with such an aura are radiant beings that inspire trust and wisdom.

They are purposeful and have managed to attain spiritual mastery, which is reflected in their daily lives.

It might fluctuate from one period to another, depending on whether that person can maintain his spiritual expansion in the material world.

However, when one reaches that state, it can already be said that he has seen a part of life that only a few can aspire for, one in which life is meaningful and connected in all aspects to the universal flow of being.

Thank you, I hope you enjoyed learning about the gold aura meaning! Please feel free to check out the related articles below! 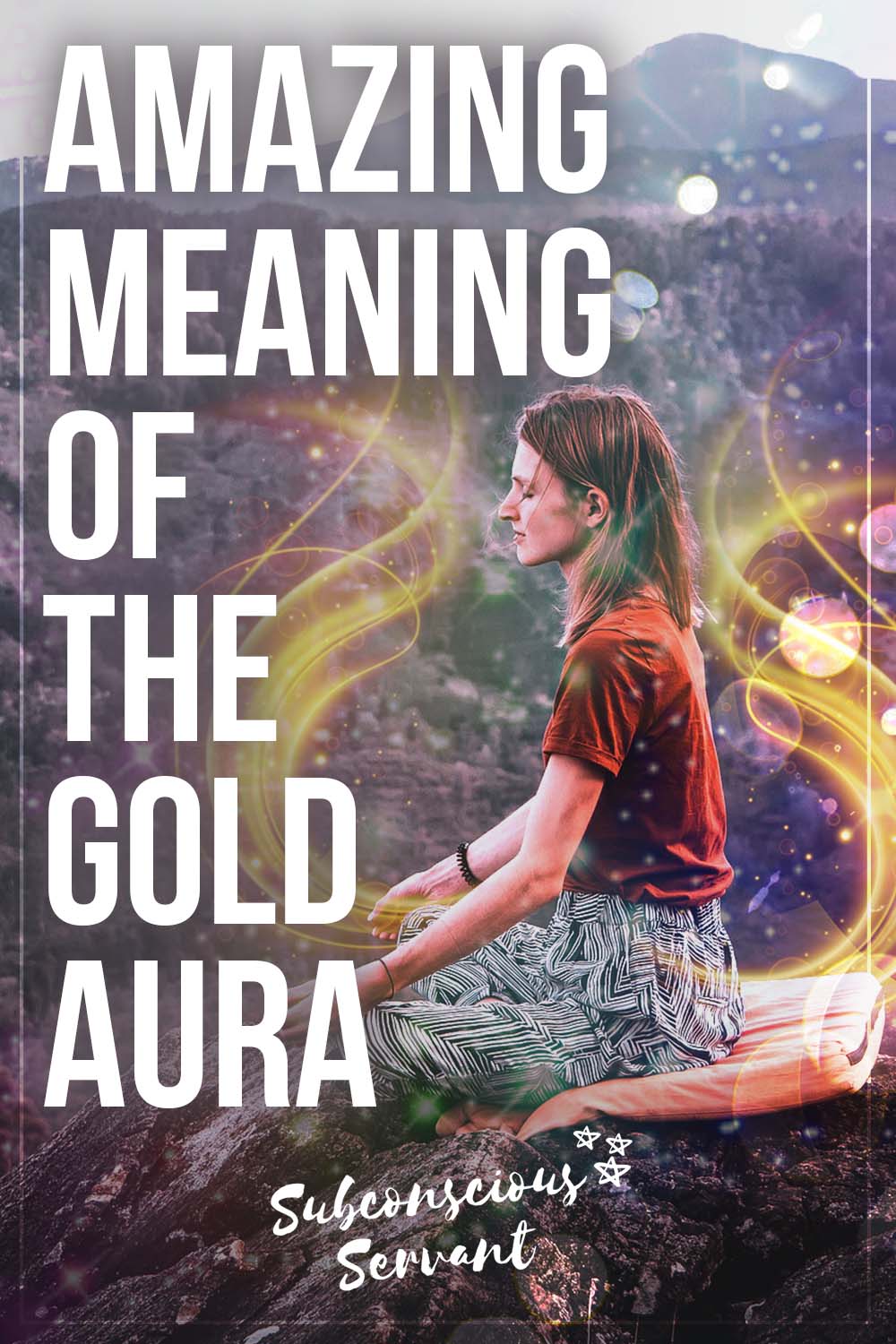 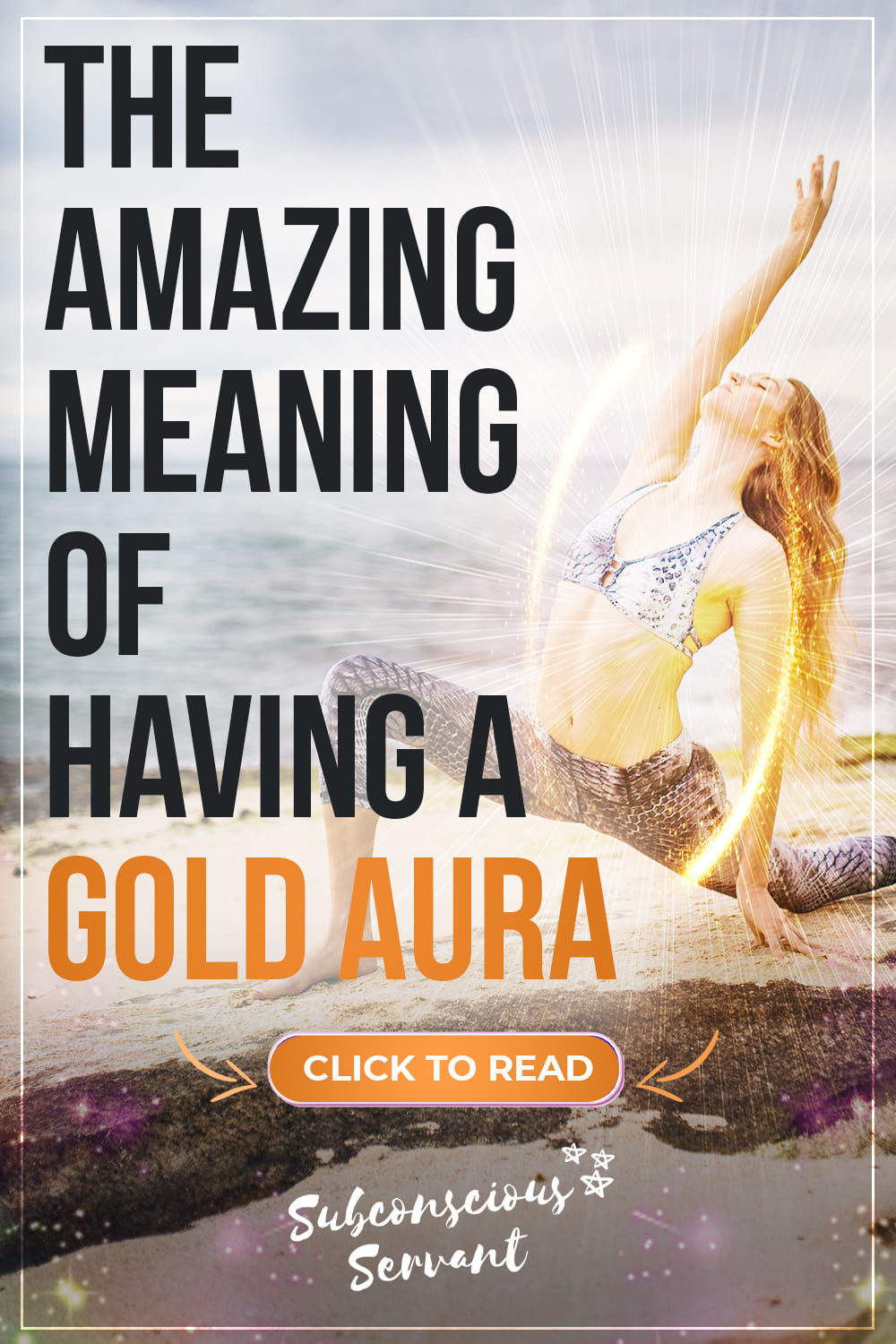 4 Black Aura Meanings (How Negative Is This...

How To Cleanse Your Aura (10 Amazing Ways)