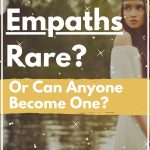 Empaths are highly sensitive individuals with abilities that mimic that of a superpower.

There are different types of empaths and different levels of the sensitivity they experience.

In a world filled with materialistic temptations, being an empath can feel quite lonely at times. So much so, that it makes one question…

Is it rare to be an empath?

Determining the rarity of empaths in the world is difficult because it isn’t an exact science. However, some people believe everyone is born an empath, but their abilities become suppressed over years of conditioning by society. Others believe empaths are born with a special gift for sensitivity that others cannot possess.

It might not be unanimously agreed upon, but many believe that everyone can become an empath with enough inner working and conscious practice.

This is a common thought among those that are empaths themselves as well because empaths are always trying to further serve humanity with their gifts.

Empaths are known to try and teach those closest to them, their ways, including being receptive to sensitivity.

How Rare Is It to Be An Empath?

Answering the question of how rare it is to be an empath is difficult for many reasons.

Namely, it depends on what your definition of being an empath is.

For instance, some people believe that simply taking on the emotions of others makes you an empath, while others believe it extends beyond that point.

They believe that true naturally born empaths can go as far as predicting your next moves and potentially read your mind based on the emotions they take in from you.

Not to mention the body language and personality traits their intuition picks up from you.

It could be said that both definitions are true, in their own way.

Naturally born empaths show signs of it immediately after birth.

If your baby is born an empath, you might hear people say, “Wow, he is so alert!”

Essentially, newborn empaths are extremely responsive to sensory things like:

Even naturally born empaths could have their abilities suppressed based on their upbringing.

If their parents aren’t aware of the signs of this natural ability or they simply don’t believe in it, the baby’s abilities will undoubtedly be suppressed.

That said, as the baby grows, he or she usually becomes more self-aware and can dig to find these suppressed abilities in adulthood.

Those that do have a better chance of living a more fulfilled adult life.

If this is the case, the self-discovery usually starts because the person is suffering from anxiety, depression, or some other form of mental or personality disorder.

It is extremely common for undiagnosed empaths to suffer from things of this nature until they step into their power and live their lives consciously.

In the world of science, empaths are most closely related to what is known as Synesthesia.

Synesthesia is a form of high sensitivity to sensory items.

It is a neurological trait that allows for crossover between two senses. The trigger of one sense causes a reaction to another.

A person exclaims that they can see sound or hear color.

Another example of this is when a person watches someone get punched, and they feel it as well.

The same can be said for someone else’s emotions as well.

The only way science has been able to measure the number of empaths in the world is directly related to the number of people that are diagnosed with Synesthesia, which is just under 2 percent of people.

In the spiritual world, the term empath includes Synesthesia in this all-encompassing sensitivity gift.

Whether you cognitively rationalize the feelings, you pick up from someone else, or you rely more heavily on the emotions themselves, all empaths have their unique traits that come easier than other things.

Perhaps the rarest type of empath is an emotional type called Heyoka.

The Heyoka empath is a Native American term for what translates to “the most powerful empath.”

They are the emotional mirror of the empaths.

The Heyoka empath has the ability to see a weakness or darkness lying within you and can reflect what you need to work on out at you.

Meeting a Heyoka empath in person is intoxicating.

They have an energy that consumes you entirely.

Many recall their meetings either exuberantly in love or boiling with anger.

This is because the Heyoka empath is speaking to you in a spiritual sense. They are literally showing you what needs to happen in order for you to progress in your life’s journey.

Sometimes the person isn’t even aware they are doing it until it is all said and done.

It’s an ability that is oftentimes difficult to suppress.

Many people read it as erratic emotions when, in reality, it is a powerful empath that is sending you a deeper message if you are so willing to pay attention.

All that said, it is strongly believed by the empaths of the world, that everyone has an innate ability to pull out their inner empath.

After a fair amount of self-discovery and introspection, anyone can harness this innate sensitivity within us all.

Natural born empaths that are encouraged to explore their abilities from birth might have an easier time harnessing their abilities in adulthood, obvious, but that doesn’t mean it isn’t possible for someone to develop this ability later in life.

If you want to know more, check out this article on the Heyoka Empath.

As mentioned above, babies can be born into the world as empaths.

Whether they come from parents that are empaths or they are simply born with the temperament of an empath.

Genetics and temperament are two ways people become empaths, but there are two others as well.

The two other ways someone becomes an empath are either through extremely supportive parents, or the other end of the spectrum, through trauma.

Each of these two ways derives from the two extremes in parenting.

You either were supported in a way that allowed you to freely express your empathic nature, or you experienced a severe lack of support and potential horrors that brought out the natural sensitivity within you.

The latter tends to show up a little later in life because the person first has to go through the trauma.

Not only that, but there is a certain healing process that takes place as well.

You might start to realize you are an empath, but it is nearly impossible to master your abilities until you have completely ironed out all your internal baggage, including the trauma that suppressed your talents for so many years.

You might be thinking, “Can you only become an empath by experiencing some type of trauma beforehand?”

The answer is no.

Even if you didn’t have supportive parents that understood the signs of an empath and nourished your skills from the very beginning, you can experience this same type of love and nurturing later in life.

It doesn’t matter where it originates; all that matters is that you experience it.

The experience puts your head into a different space, one filled with sensitivity to the happiest of emotions and utter bliss.

This headspace helps your transition into your empath abilities rather smoothly.

Those that suffer from trauma don’t have it as easy, unfortunately.

Most of the time, the term “empath” doesn’t enter their world until they have made it through the darkest part of their trauma and have begun the healing process.

That is the only way that someone in this type of situation would except the idea of being an empath as a way to continue healing from their trauma and heal others with their emotional and intuitive strengths.

It is hard to say which empath is stronger or more powerful between those born into their power vs. those that develop it later on during the aftermath of a traumatic event.

They both have their strengths and weaknesses, which makes them a perfect fit for one another.

When these two specific types of empaths connect, they are typically seen as a power-couple, or they are the friends that are telepathic or attached at the hip, so to speak.

How To Know You Are An Empath

The life of an empath can be a lonely one at times, so it is recommended you stay close with those that support you and help restore your energy rather than always taking it away.

Empaths do better when they are friends with other empaths.

Usually, learning about what an empath is seems to be quite exhilarating for those that are empaths but never knew it.

It’s as if they finally discover themselves, and you can visibly see a weight lifted off their being.

There are common signs that are good indicators of someone being an empath, and for more information check out this article that reveal all the Traits of a TRUE Empath.

It is especially true if you also easily become anxious or overwhelmed when people touch or hug you.

Empaths usually have great intuition and listening skills as well and find it nearly impossible not to care about other people, plants, and animals.

Another great indicator that you are an undiagnosed empath is you find that those closest to you come to you for advice.

Not only that, but strangers feel comfortable confiding in you as well.

You have a natural knack for listening and reading through to the core of someone’s problem, which makes for great advice to someone that is having trouble seeing clearly.

Learning about empaths might not be considered an exact science just yet, but there is no question that empaths are very real.

It makes for determining their rarity slightly impossible.

However, we do know that in the materialistic world of today, there aren’t many people that can relate to the common signs that indicate you are an empath.

In other words, being an empath in today’s world is definitely seen as a rare thing, but many that already know they are empaths can see clearly that the world can and will be changed the moment people realize that everyone has the ability to be an empath.

All it takes is a little receptivity paired with a healthy dose of self-discovery and self-honesty.

This read was amazing. I have recently been told that a concerned family member has had two separate psychics do a couple hour meditation on me. (without my knowledge) that I am a very strong empath, but I haven't not learned to control it. I've been struggling with it and have been having a lot of spiritual support and visits. I have been reading several articles on Empath's and have taken many tests. Almost like seeing a blueprint on why I'm different, one that I can relate to on nearly every detail. I'm just starting to open my mind and am going to continue to try to learn much more about this. It just all makes so much sense.